Narendra Modi and the Anglosphere 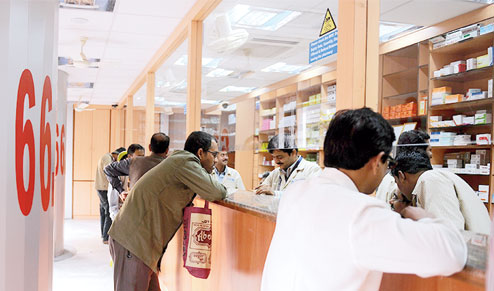 Watching the prime minister in America is unlike watching him elsewhere. Narendra Modi is a different person there. At home or in our neighbourhood, he is very much the Leader: deliberate, unsmiling and over-produced like someone soaked overnight in gravitas. When he makes a stump speech, he is more animated but you have to be on his side to enjoy it because it is a taunting animation. His rhetorical control in Hindi is remarkable, given it isn't his mother tongue. This isn't the routine Hindi-fluency of the RSS pracharak because in campaign mode, Modi's spoken Hindi can be robustly Hindustani. Advani was fluent but it was a stranger's fluency: too shuddh to be rousing, made faintly absurd by the prissy delivery. Even when he was touring UP in his pink chariot whipping up a frenzy over the Babri Masjid, he wasn't formidable, just sinister: the bigotry of his message weirdly at odds with his gentility. Modi's public-speaking manner is variable: he can be colloquial and grandiloquent, masterful (when trolling his enemies) and tiresome (when congratulating himself).

In America, he's different. There is an eagerness to him in the US that's unusual. The self-conscious dignitary turns into a curious visitor, inhaling a brave new world. Stateliness yields to something very like sprightliness. Walking down the aisle before addressing the joint session, he pumped hands, squeezed arms, slipped in a thumbs up, reached out with both hands when one wasn't enough, acknowledged the galleries and just radiated affability and goodwill. When he assumed the lectern, he waved and pointed and waved and basked in the sunshine of their regard. If they had clapped any harder he might have clambered over tiers of seats to shake their hands. Americans don't know it but their Congress is to Narendra Modi what Centre Court was to Pat Cash.

The fact that he spoke in English tells us something. Modi is willing to stumble and forgo his absolute control of Hindi to impress, to persuade, to forge a direct connection. This isn't the first time he has done this; when he addressed a joint session of the British parliament he spoke in English for the first time on a major stage in an English-speaking country. It was a more wintry, buttoned-up affair than the American occasion. Modi was sombre in a dark bandh-gala suit whereas he wore a churidar-pyjama and a waistcoat (black, not one of his pastel specials) to Congress. Also British MPs don't do enthusiasm well; they clapped politely without the standing ovations that fire the blood of a rhetorician like Modi. The main difference, of course, was that Great Britain is an influential offshore island that punches above its weight while the United States, though diminished, is still our only global hegemon. Modi is a connoisseur of power and its concentration, and in Congress he sensed that the Force was with him.

But more important than the differences were the similarities in the two speeches. Take the high-literary references that marked both of them. The speech in Parliament featured T.S. Eliot, the one in Congress ended with Walt Whitman. The Eliot reference in Modi's speech is to "The Hollow Men". With apologies to Eliot, Modi assures the gathered MPs that India is a great place to invest in because he (Modi) won't let a shadow fall between the idea (his vision of India as a business destination) and the reality (the actual ease of doing business on the ground).

Did the speech-writer tell the prime minister that the second of the poem's two epigraphs reads, "A penny for the Old Guy"? It's a reference to Guy Fawkes, a terrorist who tried to blow up England's parliament exactly 410 years before Narendra Modi addressed it. Guy Fawkes is ritually burnt in effigy every November, the same month in which the Indian prime minister addressed parliament. Luckily for Mr Modi he spoke on the 12th; had it been a week earlier it would have been the anniversary of the Gunpowder Plot! From the haystack that is English literature, it takes a special kind of genius for the prime minister's brains trust to nobble this needle.

The allusion in the speech to Congress was more appropriate. Once again, one of Modernism's giants, Walt Whitman, was pressed into service to sell India as a place to invest in. "The orchestra," declared the prime minister, "have sufficiently tuned their instruments, the baton/has given the signal." With senators and congressmen laid out in cheering banks in front of him, Mr Modi must have felt like a virtuoso conductor. And if the quote reminded those assembled Americans of the lines that followed, so much the better: "The guest that was coming, he waited long, he is now housed,/ He is one of those who are beautiful and happy, he is one of those/ that to look upon and be with is enough." Yes!

More seriously, though, the other thing the two speeches had in common was political banter. Both times, Modi made a point of calling out the principal figure in the house by name and joking about the cut and thrust of parliamentary politics. In London, he named David Cameron and observed that he was looking relaxed and relieved because parliament wasn't in session. In Washington, he name checked Paul Ryan, the speaker, and joked about his reputation for being non-partisan. Wit is a good way of warming up an audience, but there was more, I think, to those little sallies than a man working a crowd. The prime minister was working the inside track as a democrat - he could joke about the trials of working with a legislature or an obdurate opposition, because he was one of them.

When commentators talk about how strongly Mr Modi has pushed India westwards, they don't give enough credit to Mr Modi's anglophilia. I mean this in the broadest possible sense. Mr Modi isn't about to turn into Shashi Tharoor or (heaven forbid) Mani Shankar Aiyar. Mr Modi is an anglophile because it isn't the West he has designs on; it is the Anglosphere, that strange transnational entity that consists of the old, white Commonwealth: Great Britain, New Zealand, Australia, Canada and the United States.

These are Churchill's English-speaking peoples, who together form an invisible and enormously powerful entity. They watch one another's soap operas, and act in one another's movies. They have always fought one another's wars. When an Indian applies for a visa to the United Kingdom, the online form has a special section where the applicant is asked if he has visited Canada, the US, New Zealand and Australia in the last ten years. As the Five Eyes, these countries formally pool their intelligence with each other in a way that excludes even their closest non-anglophone allies. This is the most exclusive club in the world.

Indian leaders are peculiarly susceptible to its charms. Dr Manmohan Singh famously thanked the British empire for the good it had done India and then, in his one flash of political passion, risked his government to sign the Indo-American nuclear deal. Lal Krishna Advani was so taken with the prospect of being a part of the Anglosphere's Coalition of the Willing during the Iraq War, that he pledged Indian soldiers to that disastrous conflict, a pledge that A.B. Vajpayee had the good sense to repudiate. Now it is Narendra Modi's turn.

This is the club Modi wants India to join, if not as a charter member, then at least as an honorary associate, like Israel or Japan. It's why he takes the trouble to court Britain and America in English, it's why he quotes their writers back at them and it is why, even as he flatters them in their legislatures, he is seduced, unknowing, in his turn. To take the Anglosphere by storm is an act of great ambition... and no little pathos.