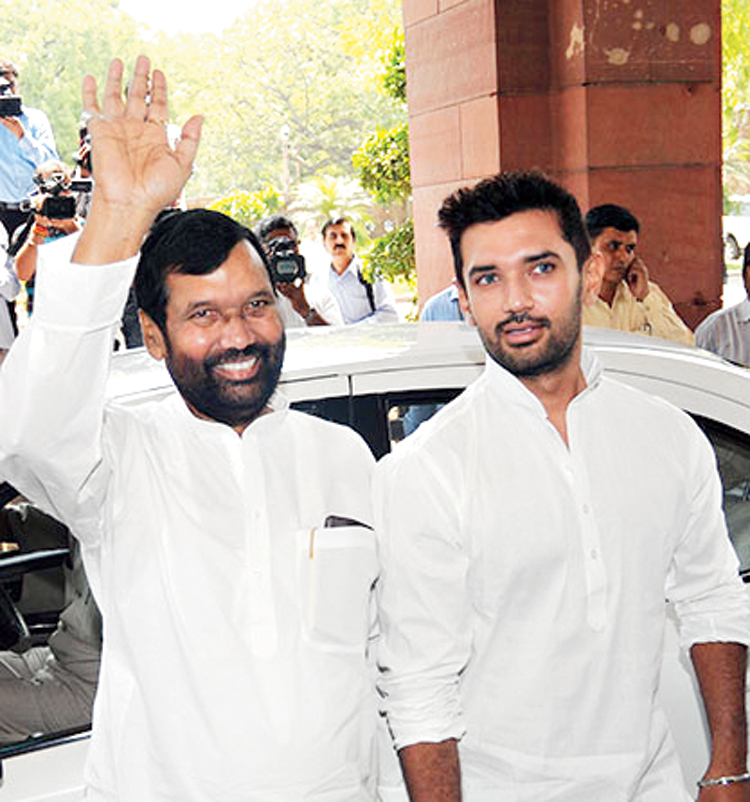 The Union minister, Ram Vilas Paswan, doesn’t pay heed to the diatribes against dynastic politics unleashed by Narendra Modi and Amit Shah in a bid to target the Congress’s Gandhi family. The 73-year-old Dalit leader is unusually devoted to his family. Having promoted his younger brothers and helped them become MPs and MLAs, he also took upon the responsibility of pushing their sons towards the limelight. Recently, after his younger brother’s untimely death, he fielded his nephew, Prince Raj, who is now a parliamentarian. Within the clan, however, his son, Chirag, occupies a special niche. Recently, he handed over the baton of the Lok Janshakti Party, which he headed for nearly two decades, to his 37-year-old son. Having handed over the post of LJP president to the second-term MP, Ram Vilas has chosen to keep his lips sealed. The reason: he wants to promote Chirag. These days, the senior Paswan, who is known for being unusually courteous to journalists, is heard saying, “I will not speak anything about politics. Ask Chirag, he is the party president now.” Recently, he got his office in Krishi Bhawan renovated. When it came to putting up pictures on the wall of the new office, the senior leader told officials that they should consult Chirag. Party leaders are now waiting for the day when Paswan senior will go to Modi and urge the latter that Chirag should replace him as a minister in the cabinet.

The state president of the Bharatiya Janata Party in Karnataka, Nalin Kumar Kateel, recently narrated a story on how his search for a picture of the chief minister, BS Yediyurappa, ended in vain in Delhi. But the outcome was not, according to Kateel, dispiriting. While photographs of the Congress leader, PC Siddaramaiah, were available at a few shops, there was no such luck when it came to Yedi’s image. Moral of the story? While Siddaramaiah’s pictures were gathering dust, those of Yediyurappa were selling like hot Christmas cakes. Yediyurappa’s popularity has risen after he led his party to win 12 of the 15 seats in the recent bypolls. But who might be so eager to buy his pictures in Delhi?

The Union home ministry was itself unclear over the magnitude and intensity of the protests against the new citizenship law. The junior home minister, G Kishan Reddy, said on Thursday that the Centre had not expected such huge protests against the Citizenship (Amendment) Act, but a senior ministry official was singing a different tune, saying “The government had anticipated protests only in certain pockets including the Northeast.” A section of ministry officials feel that instead of blaming the Opposition for fuelling the protests, the government needs to clarify the issue and respond to the apprehensions and fear of the people. “Several parts of the country are witnessing protests over the CAA but the top leadership is silent. We hope the PM will soon address the nation via his Mann ki Baat,” confessed a bureaucrat.

While the prime minister never tires of reminding one and all that he works day and night for the sake of the country, many senior ministers in his government are not seen in their office for days. Although officials claim that these ministers work from home or are on official state visits, the real reason for their ‘invisibility’ is very different. Many ministers have been tasked with organizational or party work by the BJP chief, Amit Shah. The ministers prioritize these responsibilities because Shah is known to be a hard taskmaster.

Moreover, there is also a pecking order. Shah has his own favourites and he only depends on them for important party work. Narendra Singh Tomar is one such senior minister who is said to be a favourite of Shah for getting organizational issues fixed. Tomar handles two heavyweight ministries of agriculture and rural development and many feel party work is affecting his performance as a minister. But in the current set-up, can anyone dare to say no to Shah?

Nepal’s PMO appears to have gone into a spin on Friday night after a tweet was retweeted from the handle of the Nepalese premier, KP Sharma Oli, wondering why Narendra Modi had not addressed India like the Congress president, Sonia Gandhi, over the new provisions on citizenship. According to Oli’s press secretary, a probe is on to see if the password for the handle had been misused, urging all not to misconstrue or be misled as speculation grew on whether the retweet was Oli’s way of commenting on the CAA-related protests in India.

Incidentally, the interim Congress president had come out solidly in support of the protesting students while chastising the Modi government for curbing the freedom of expression and subverting the Constitution.

It is payback time for Narayana Gowda, who had defected from the Janata Dal (Secular) and faced a footwear attack from angry party workers. Once a protégé of HD Revanna, the son of the former PM, HD Deve Gowda, Narayana Gowda has a newfound home in the BJP.

Hence, he declared that Revanna is no more his guru. “Now the BJP high command is my guru,” said Narayana Gowda recently. But Revanna, who can get as moody as dark winter clouds, couldn’t care less.