Advertisement
Home / Opinion / Smriti Irani has her eyes on the prize

Smriti Irani has her eyes on the prize

She has emerged as a giant slayer this election, defeating Rahul Gandhi in his pocket borough, Amethi 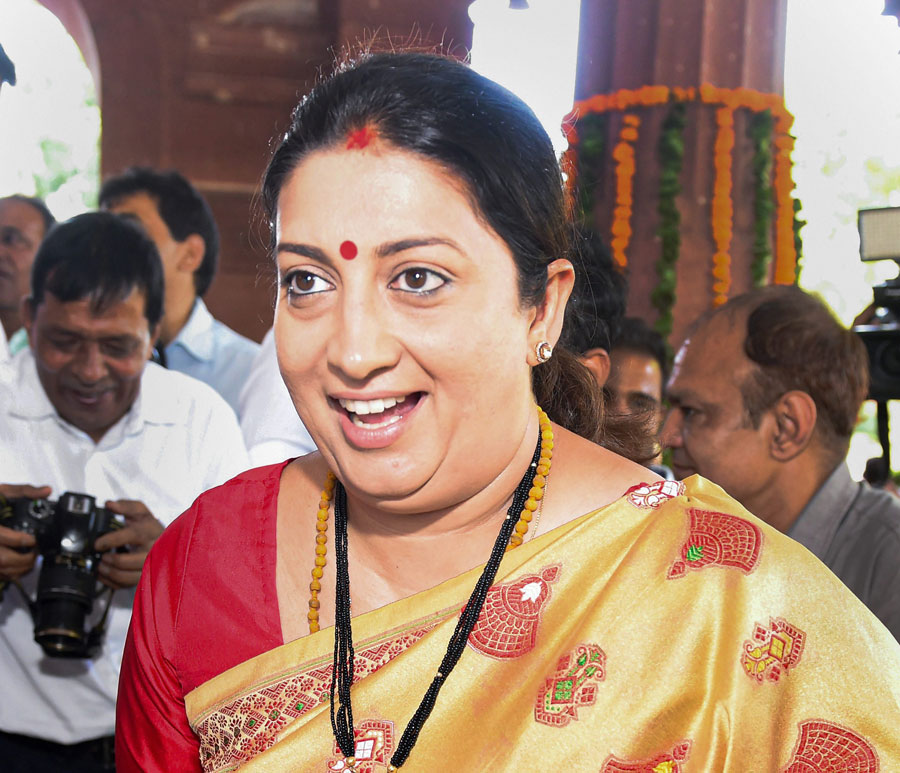 All battles have winners and losers. But defeat can be hard. For many member of the Grand Old Party, the temptation to blame electronic voting machines as soon as the trends showed a BJP sweep was high. But there were strict instructions from the high command to hold their horses. The Congress did not want to jump to the wrong conclusion about EVMs without a thorough discussion with other Opposition parties, especially given the current mood of the Election Commission.

Yet, the young Turk from Gujarat, Hardik Patel, tweeted that the BJP won by “beimani”. He was immediately asked to calm down. Patel insisted that, “You can abuse me but the truth must be spoken.” But Patel later changed tune, tweeting poems about perseverance and the resolve to fight back. He also went on to tweet that he accepted the people’s verdict and congratulated those who won.

Is not acceptance the first step towards change?

Smriti Irani is not the only one hoping to partake of the spoils of victory. The 76-year-old B.S. Yeddyurappa — who, until recently, was seen as headed towards the dreaded margdarshak mandal — is hoping for a fresh lease of life after the landslide win for the BJP in Karnataka — it won 25 of the 28 seats from the state. Although the Rashtriya Swayamsevak Sangh has apparently already considered names like B.L. Santosh to take over from Yeddyurappa, the crafty septuagenarian seems to have been thrown a lifeline.

The massive mandate in the elections is a momentous event for Narendra Modi and Amit Shah. But for Arun Jaitley, the moment was bittersweet. He has long been known as the back-room manager of the party. This time, however, he was literally pushed to the back room as health issues stopped him from taking on field responsibilities. Instead, Jaitley churned out blogs to publicize the BJP’s agenda. But his long career in politics notwithstanding, Jaitley has always been a member of the Rajya Sabha, which does not involve direct elections. In 2014, however, he had tried to secure a public stamp of approval by contesting the polls from Amritsar. Unfortunately, he, like Irani, had lost in spite of the Modi wave that swept the country. This year the BJP had fielded diplomat-turned-politician, Hardeep Singh Puri, from Amritsar. To Jaitley’s relief, Puri, too, lost. Victory, then, is not the only thing that tastes sweet.

All good things come to those who wait. Smriti Irani has certainly waited, patiently nurturing Amethi for five years since she lost to Rahul Gandhi from the seat in the previous Lok Sabha election. Irani emerged as a giant slayer this election, defeating the Gandhi scion in his pocket borough, Amethi — achieving something that was almost incomprehensible. Even though she lost during the first ‘TsuNamo’ in 2014, she kept up her dogged efforts to gain the trust of the constituency by working for it. Fittingly, after her victory, she tweeted, “Who says the sky can’t be punctured.” It is now time to receive the spoils of victory and, according to the buzz in the corridors of power, Irani expects to be richly rewarded for her achievement. She began her career in politics with a high-profile berth as the minister of human resource development in the 2014 cabinet, but had later been sidelined to the textile minister. But all that is now in the past. What would be a post appropriate for a warrior of her stature, many within the Bharatiya Janata Party are wondering. Some are of the opinion that Irani is eyeing the external affairs ministry. This, however, would require edging out the veteran politician, Sushma Swaraj. But that should not be too hard a task for a giant slayer.

The Congress rout was so overwhelming that it polled more votes than the BJP in just seven states and Union territories. Three of the states that supported the Congress were Kerala, Tamil Nadu and Telangana. But for the mercy of the Dravida Munnetra Kazhagam in Tamil Nadu and positive impact of Rahul Gandhi contesting from Kerala, the Congress could have been reduced to 30 seats in the Lok Sabha. Commenting on this pitiable state of affairs, a key strategist said: “We knew we were weak in some states... [but] we were convinced the Congress would cross 130... Now everybody is shocked. We should see this as a divine intervention as Lord Rama is with the BJP.” The displeasure of the divine forces seems to be the only explanation as even in states where it won assembly elections barely six months ago, voters blessed the BJP. Truly, the divine works in mysterious ways.

A joke doing the rounds in Kerala is whether the BJP will now have to find a fresh gubernatorial role for Kummanam Rajasekharan, who was pulled out of the Raj Bhavan in Mizoram in order to be fielded against Shashi Tharoor from Thiruvananthapuram. Unfortunately, Rajasekharan was bowled out while Tharoor scored a hat-trick, belying the BJP’s dream of riding the Sabarimala issue to victory. Will the saffron party find another seat for Rajasekharan?

As part of the celebrations, the BJP national general-secretary, Ram Madhav, took his team to Khan Market — a market in the heart of Lutyens’ Delhi that has been in the news owing to Narendra Modi’s repeated references to his detractors as the ‘Khan Market gang’. But given that members of the Vivekananda Foundation — from where several appointments were made in the first Modi government — officials from the PMO and the giant slayer, Smriti Irani, herself have often been sighted there, this is really no surprise. Will the real ‘Khan Market gang’ stand up please?