There is yet a road ahead for the anti-BJP bloc 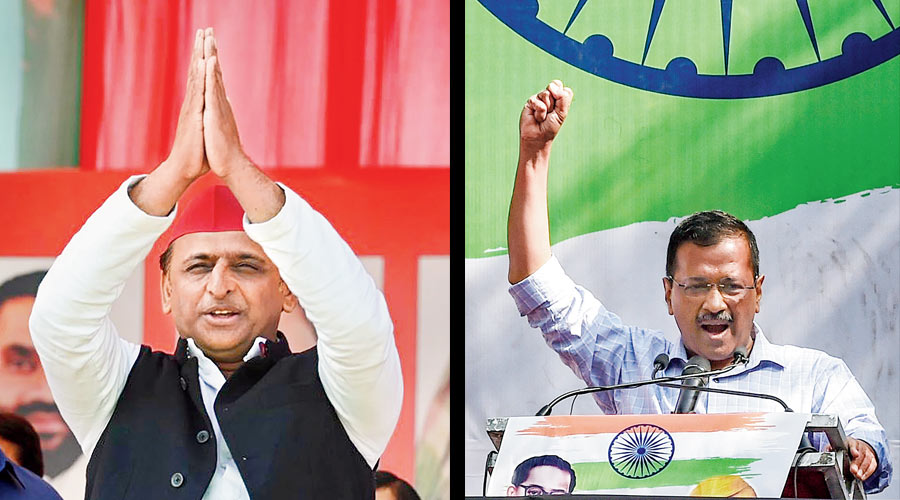 It could have been worse. It’s hard to see how, when the sense of being trapped in one of A.K. Ramanujan’s variant Ramayanas — the one in which the asuras win repeatedly and Lanka overruns Ayodhya — is overwhelming, but it could have been. Think Rakhine mid-purge or Jaffna at the end. The recent history of our near abroad teaches us that there is no floor to majoritarian viciousness; its lower depths have lower depths. So, tempting though it is to credit the Bharatiya Janata Party’s success in Uttar Pradesh and elsewhere to a terminally communal People, this is a rhetorical luxury that losers can’t afford.

The BJP’s massive win in UP has sparked a discussion about the balance between bigotry and government aid in cash and kind in securing that victory. On the one side, you have those who think that cleanly delivered State subsidies made Yogi Adityanath’s government seem like a benevolent annadata and neutralized the discontent about mass unemployment and the government’s criminally inept Covid response. On the other side, you have those who argue that such subsidies have been around forever. To rebrand the beneficiaries of State largesse as labharthis and pass them off as a new electoral category is a case of pliant journalists dressing up bigotry as welfare.

The idea that the BJP has created a communalized common sense in states like UP is plausible. In this WhatsApp world, it’s easier than ever before to imagine a national community defined by a concerted hostility towards an ‘alien’ minority. It’s certainly the case that the BJP has done its best to define law-and-order, for instance, as the bringing to heel of Muslim ‘Romeos’, Muslim goondas, and Muslim illegals and the election results suggest that this communalization of the very idea of law and order has worked.

The problem with this diagnosis is not that it’s untrue, but that it segues into a counsel of despair. Liberals and leftists are generally materialist in their understanding of the world, which is to say that they believe that the need to maximize material well-being drives voting preferences. This belief can co-exist with the notion that majoritarian bigotry reinforces political choices, but when electoral defeats tempt progressives to condemn the electorate as incorrigibly communal, perversely privileging Muslim hatred over material incentives, they back themselves into an avoidable political corner.

There are two reasons why we should resist the temptation of believing that bigotry is entrenched in states like UP or Assam or Karnataka or Gujarat, the four dhams of Hindutva. The first is the fact, banal but true, that you can’t elect a new People. No politics is possible if you start by believing that your voters are lost to reason, that they are, as baffled Marxists used to say, falsely conscious. There’s been a lively debate amongst historians of colonial and modern India about the origins and nature of communal consciousness. One of the principals in this debate, C.A. Bayly, argued that ‘consciousness’ was a misleading category because it suggested a consistency, continuity and permanence that wasn’t historically demonstrable.

Bayly suggested an alternative term borrowed from the Annales School of historians: mentalité. He preferred mentalité because he thought it suggested a way of filtering the world that was at once recognizable and distinct but at the same time subject to change in response to changes in the world. There are examples of rabidly communal politicians being defeated in western Uttar Pradesh, a region that was starkly polarized by the Muzaffarnagar violence just a few years ago. Sangeet Som and Suresh Rana lost to SP-RLD candidates. The very fact that it’s possible to broker an alliance of Jat, Gujjar and Muslim voters in Sardhana suggests that it’s a mistake to see a communal mentality as a permanent condition.

Also, it’s one thing for Muslims, who have been at the receiving end of majoritarian discrimination and violence, to speak of the existential bleakness of being Muslims in India today, but quite another for the rest of us to chorus that despair. Muslims need solidarity, not performative empathy. Instead of pointing up our pluralist virtue by condemning the bigotry of others, it will be much more useful if we join in the mobilization against the Citizenship (Amendment) Act and the National Register of Citizens the next time they are weaponized by the BJP, instead of leaving the work of demonstrations, sit-ins, funding and processions to Muslims.

Principled centrists who fancy themselves as political pragmatists and counsel liberals against obsessing over ‘Muslim’ causes for fear of the capital that the BJP makes out of such partisanship might want to commit themselves to the agitation against the CAA-NRC pincer move for the implications it has for secular citizenship rather than its impact on the status of Muslims.

If the most important result of the recent assembly elections was the re-election of Adityanath’s government in UP, the second-most important headline was the Aam Aadmi Party’s massive win in Punjab. The AAP is remarkable for the fact that it has held on to Delhi’s state government through the period of Narendra Modi’s ascendancy. Now it has an opportunity to implement its governance agenda centred on subsidies, education and health services in a proper state, without being hamstrung by an interfering Central government and its proxy, Delhi’s lieutenant governor.

Arvind Kejriwal’s flirtation with the Rashtriya Swayamsevak Sangh during his India Against Corruption phase, his party’s indifference to the plight of Muslims during and in the aftermath of the riots in north-east Delhi in 2020, its opportunistic owning of the putative Ram Mandir in Ayodhya suggest a party that has adapted to the majoritarian mood music of Modi’s India. Kejriwal’s invocation of Hanuman as a counter to the BJP’s invocation of Ram is read by some as a sign that he broadcasts on roughly the same band as the BJP and by others as a sign of necessary realism, as a bid to create a narrative out of transparency and the provision of services rather than the staple of religious identity.

There are many things that are unattractive about AAP but it’s hard to see how its faults aren’t shared by other political parties that progressives are willing to celebrate. Mamata Banerjee, valorized for her routing of the BJP in the last assembly elections in West Bengal, has been a formal ally of the BJP in the past. Kejriwal’s cult of personality is but a candle to the sun of Mamata worship. The Dravida Munnetra Kazhagam is both dynastic and Dravidian and Maharashtra is ruled by a government headed by the Shiv Sena.

It’s reasonable to hazard the guess that most people opposed to the BJP’s majoritarianism subscribe to the doctrine of the lesser evil. There’s no question that even the most finicking progressive would concede that the AAP fits comfortably into that category. Whether it is our chosen political vehicle or not, it’s obvious that it has invented a new political idiom and parlayed it into electoral success in small states like Delhi, Punjab and now Goa. Also, the AAP isn’t embedded in the RSS and the sangh parivar’s front organizations. At worst, the AAP might turn out to be a majoritarian party minus fascist cadre; at best, it is a party that has found a benign way of being populist. In both cases, it is preferable to the BJP and, given the state of the Congress, fills a vacuum that otherwise might have gone by default to the BJP.

So, it could have been worse. And if the sangh parivar has its way, it will be. In this season of small mercies, Akhilesh Yadav and Arvind Kejriwal have shown in their different ways that there is a road ahead.