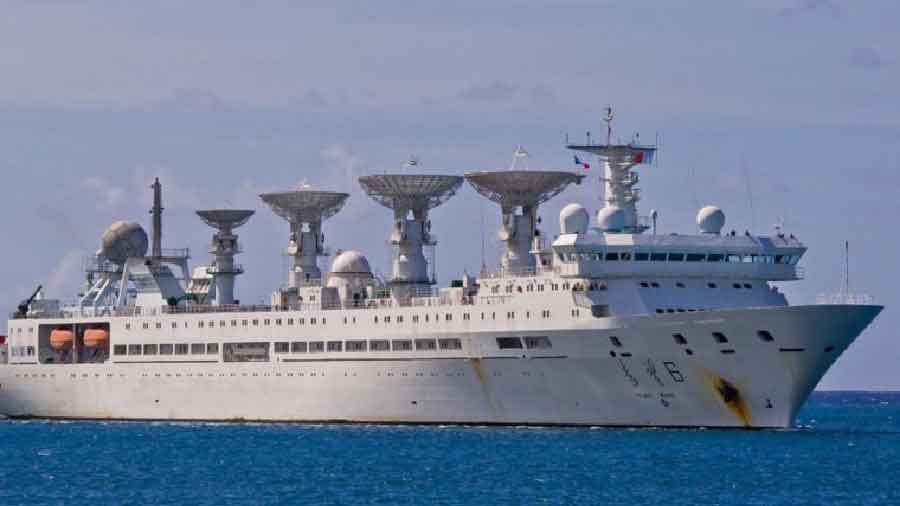 When the Chinese research ship, the Yuan Wang 5, docked in Sri Lanka’s Hambantota port with “Long live China and Sri Lanka friendship” banners, there was concern in New Delhi, Western capitals and even in Sri Lanka about what this portends. Colombo initially asked Beijing to defer the visit after objections were raised by India but gave it docking permission for refuelling with the proviso that it would not engage in any research.That the Yuan Wang 5 could be used for space, satellite and intercontinental ballistic missile launches tracking is well understood in India and elsewhere. The episode is a stark reminder for New Delhi and for the world of how China’s grip on the Indian Ocean is getting consolidated.

Predictably, Sri Lanka underplayed this development by suggesting that lots of international ships dock in Sri Lanka and that Colombo was working to ensure there was no ‘friction’ with friendly nations.China, unsurprisingly,said that the visit of Yuan Wang 5 was part of “normal exchanges between the two countries”. This despite the fact that just a few days back Beijing had put pressure on Colombo, arguing that it was “completely unjustified for certain countries to cite so-called ‘security concerns’ to pressure Sri Lanka.”

Chinese vessels have been in Sri Lankan waters before, causing tensions in India-Sri Lanka ties. Two Chinese submarines berthed at Colombo port in quick succession in 2014, causing much consternation in New Delhi. In 2017, the then prime minister and now president, Ranil Wickremesinghe, did not allow a Chinese submarine to visit Colombo during Narendra Modi’s visit given Indian sensitivities.

But this time, the context is slightly different. India had been at the forefront of extending a helping hand to Sri Lanka at a time when the island nation has been facinga steep economic crisis. Despite having partly contributed to the Sri Lankan economic crisis by pushing unsustainable loans, China was nowhere in the picture as the crisis escalated. It refused to restructure the debt, something that the Sri Lankan leadership explicitly requested.

The Chinese stranglehold over the Sri Lankan economy is a reality. Hambantota has become the most prominent example of the ‘Chinese debt trap economic diplomacy’. Under duress, this port had to be given out to the Chinese on a 99-year lease for $1.12 billion by Sri Lanka. With an economically bankrupt Colombo seeking help, China has used this moment to showcase how it intends to use the infrastructure it has built for military and strategic purposes.

New Delhi has showered its economic largesse on Sri Lanka to make it clear that India keeps the interests of ordinary Sri Lankans at the heart of its outreach. Along with several shipments of much-needed fuel, food and fertilisers to Sri Lanka in recent months, India has also provided more than $3.5 billion as credit and currency swap.

The fact that China had to demonstrate its military might at a time when Sri Lanka is at its weakest reflects a concern in Beijing about India’s growing profile in the island nation. But this will have consequences for India and for India-Sri Lanka relations. The People’s Liberation Army Navy has been seeking a forward presence in the Indian Ocean region by building bases. What is happening in Hambantota is a signal about the Chinese intent with regard to infrastructure it is building in the wider region.

India gifted a Dornier 228 surveillance aircraft to Sri Lanka to bolster the latter’s maritime surveillance capabilities a day before the arrival of the Yuan Wang 5. New Delhi should be working doubly hard to enhance its maritime presence around China’s periphery while Sri Lankan policymakers would do well to remember that India is a democracy where the government’s ability to pursue a course of action is contingent on popular support.If the people of India feel that their nation’s red lines are being repeatedly ignored by Colombo, Indian policymakers would be constrained in lending a helping hand the next time.