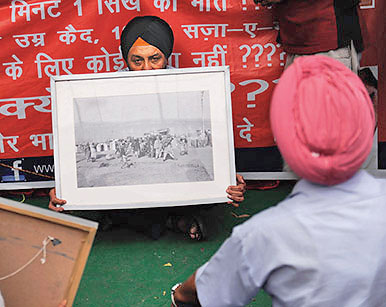 My memory of October 31, 1984 is quite clear - from the moment we were bustled out of school on to the school bus, dropping our Sikh driver near a railway station to the south of Calcutta, to the time we reached home nearly four hours later (instead of the usual forty-five minutes or so). I remember the newspaper front page next morning, and the fact that there was no school the next day; I also remember whispered rumours of Sikhs being killed all over the country and especially in Delhi, and how, in our locality, a cluster of Sikh families were cooped up in their homes, or had fled. There was no mainstream newspaper coverage of the killings that were going on, let alone any on Doordarshan or Akashvani. And yet we knew. What happened on the first three days of November 1984 was no more a secret than what happened in Gujarat 2002, and involves no less guilt either. And like 2002, the guilty have not been made to pay.

In this book, Pav Singh, a British journalist of Punjabi origin, visits (it cannot be called 'revisiting' because we choose not to 'visit' moments of our shameful past) those three days, painstakingly putting together the story of how the killing of Sikhs was carried out in and around Delhi - using first-hand accounts of survivors, eye-witnesses, observers and journalists who keep the memories alive in spite of India's culture of deliberate or induced forgetfulness. Singh begins with a reasonably representative (but by no means exhaustive) account of the actual killings - thus nailing the guilt; he then goes on to expose in extensive detail how the mass killings (these were not 'riots') were plotted by men belonging to the ruling party, how institutions of law enforcement were implicated in them, and how agencies of the Indian State first stood aside during the killings, and then made sure that the perpetrators were not brought to justice.

Singh is a journalist, and the work has all the attributes of a journalistic account - it is easy reading, factual, and occasionally polemical (especially the bit about contributions of the Sikhs to the Indian nation, and even more the bit on the history of the community). The book is focused on the moment alone - thus it speaks of the assassination of the then Indian prime minister, Indira Gandhi, and the killings that followed with great care. It does not even come close to contextualizing the moment within the much larger issue of Punjab's disgruntlement with the Indian State that led to Operation Blue Star, or the blowback of the Khalistan movement that followed.

Singh's account largely tells us, who were around and alert in 1984, what we already know. His work resonates with a sense of disbelief and outrage as to how such heinous acts of crime and bestiality can escape with impunity, and with a grim determination that the moment be never forgotten. It is important that these emotions of his be registered and shared, for what happened to the Sikh community of Delhi and elsewhere in India in 1984 could happen to anyone else at any time. It is not so much the case of the vulnerabilities of a religious minority in an overwhelmingly Hindu State - the true significance of 1984 (as of 2002) was to show how insecure an average Indian can be if he is identified as a part of a group of people 'that needs to be taught a lesson'. If then the party in power chooses to let the leashes off its followers, and instructs law enforcement agencies to stand down, no Indian is safe. And neither is that a secret.