It proves that terrorism is deeply entrenched in the region 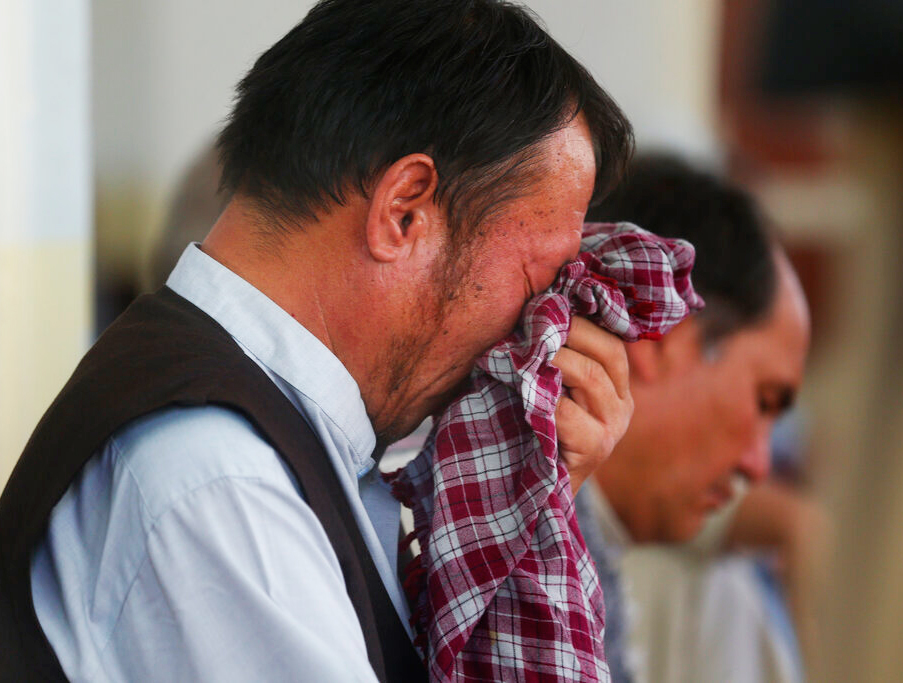 Men mourn at a memorial service for the victims of the wedding hall attack, in Kabul on Tuesday, August 20, 2019. This attack came at a time when the US and the Taliban were closing in on a deal to reduce US military presence in Afghanistan, hoping to build a road map to a ceasefire.
(AP)
The Telegraph   |   Published 23.08.19, 11:01 AM

Sir — The news of the massive explosion in Kabul on Saturday, in which at least 63 people were killed and more than 182 injured, was shocking (“Kabul wedding hall blast kills 63”, Aug 19). A suicide bomber affiliated with the Islamic State detonated a bomb inside a wedding hall, putting an end to the celebration and leaving the survivors traumatized.

This incident came at a time when the United States of America and the Taliban were closing in on a deal to reduce US military presence in Afghanistan, hoping to build a road map to a ceasefire. This time, the Islamic State employed a bomber from Pakistan. Both Afghanistan and Pakistan are generally believed to provide a safe haven to terror outfits. But the main reasons why they get the support of the local people are poverty and ignorance. The governments must therefore implement economic and structural reforms to address these issues. International cooperation is especially necessary. Afghanistan has a unique landscape, with majestic mountains and deep valleys. The government should make the most out of this by encouraging tourism, which would bolster its economy.

Sir — The recent attack in Kabul was a shameful attempt to derail the peace talks between the US and the Taliban and to instil fear among the Shia community. It proves that terrorism is deeply entrenched in the region.

The president of Afghanistan, Ashraf Ghani, has blamed the Taliban for having created the platform for terrorism in the region.

Although the al Qaida has suffered a setback since the execution of its chief, Osama bin Laden, its legacy has been continued by other groups desperate to disturb peace in the Gulf region and nurture animosity towards the West. The Taliban must realize that peace and violence cannot go hand in hand. It must help the government fight terrorist organizations. Against the backdrop of this attack, one wonders if this is indeed the best time for US troops to retreat from Afghanistan.

Sir — The International Cricket Council must make it mandatory for cricketers, especially batsmen, to wear helmets with neck protection. It is becoming increasingly dangerous for batsmen to face menacing bouncers. The recent incident at Lord’s, where the former Australian captain and celebrated batsman, Steve Smith, was felled by a deadly bouncer to the neck by the English pacer, Joffra Archer, stunned cricket lovers (“Archer’s 92.4mph missile downs high-flier Steve”, Aug 18).

It brought back tragic memories of young Australian batsman, Phillip Hughes, who succumbed to a neck injury on the field a few years ago. With bowlers regularly clocking speeds above 90 miles per hour nowadays, the wearing of appropriate body protection on the field must be made compulsory in order to avoid serious mishaps.

Sir — Within the span of a few months, Steve Smith has become the second victim of a bouncer by Joffra Archer. The first was Alex Carey, during the recently-concluded World Cup. This time, during that particular over by Archer, most of the deliveries were directed towards Smith’s body. Given that Archer was bowling at a speed of 92.4 miles per hour, one can imagine Smith’s dilemma over whether to play a stroke or leave the ball and duck, all within a split second. In such cases, the on-field umpires have a big role to play. They must act immediately within the rules of the game to contain the situation as quickly as possible. This time at least, the situation permitted ICC’s new rule of concussion replacement to come into play, which ultimately ended up saving the match for Australia.

Sir — Children are taught in school that when an emergency vehicle sounds its siren, other vehicles must let it pass immediately, as a life could be in danger. But this simple lesson seems to have been lost on most drivers today. Instead of moving to the side of the road, cars often continue moving at their own sweet pace, even when a screeching ambulance is stuck behind them. Ironically, when hearses with sirens pass by, many people touch their foreheads in prayer. It seems that we are more concerned about the dead than about saving the living.