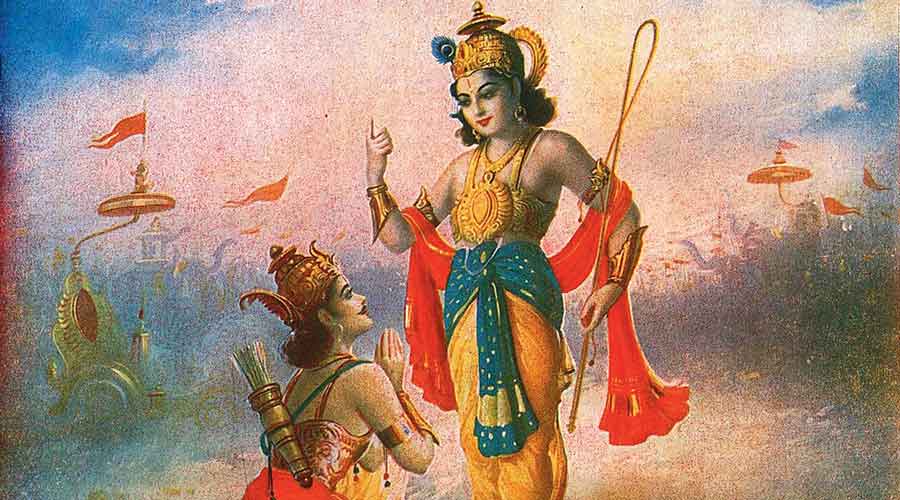 “Although dating back several thousand years the context in which Hinduism’s Bhagavad Gita was first spoken, is strikingly similar,” Das told listeners. “Set on a battlefield there, we find the military leader Arjun distraught, seeing the opposition so determined for war, with no regard for the inevitable loss of life and destruction of society. Arjun’s heart is shattered, for he can discern no clear way forward,” Das continued. “He turns to his friend and mentor Krishna, who explains, ‘This is not the state of mind in which to make decisions or respond to such crisis.’ Krishna offers an analysis of a dictator’s mindset, arising from their pride and ego. Just as his opponent may be irrationally driven by fears and ambitions, so Arjun’s preoccupation with its own emotions might also cause him to respond feebly, or with even worse consequences. Krishna coaches Arjun, not just to return to his previous mental fortitude, but to adopt higher characteristics of wisdom.”

Das concluded: “The ramifications of President Putin’s action will ripple throughout Europe... NATO countries face enormous challenges in responding to this crisis. So I pray that their decisions may not compound the irrationality.” In other words, should the west impose a no fly zone over Ukraine — and risk escalating the conflict with Putin? Or take no further action, and thereby encourage a greater war?

He had written and recorded a song, “Long Live Our Queen”, to mark the 60th anniversary of Elizabeth II’s coronation — and sent her a CD. At his hotel, Lahiri performed the song, which he had also offered to sing before the Queen, for me.

What surprised me was that he received a kind reply, written by Jennie Vine, the monarch’s deputy correspondence co-ordinator, on embossed Buckingham Palace notepaper: “The Queen has asked me to thank you for your letter... Your thoughtfulness in offering to perform your song personally for Her Majesty is very much appreciated, but I am afraid that it will not be possible to take up your very kind suggestion. I am to say, however, that The Queen has been greatly supported by the loyalty and affection she has been shown throughout her long reign, and I am to thank you for your good wishes which Her Majesty greatly appreciates.”

Johnson’s Russian seemed pretty fluent. His words may also strike a chord. It was the ‘body bag count’ that ultimately forced the Soviet Union to withdraw from Afghanistan in 1989. It is estimated that 15,000 of its soldiers were killed, and 35,000 wounded in Afghanistan.

The Daily Telegraph reported: “Tory MPs have said that if Mr Johnson is found to have broken the rules set by his own Government, he should resign. The same may apply to Mr Sunak, damaging his chances in any future Conservative leadership race. The Chancellor is considered one of the two frontrunners to replace Mr Johnson, alongside Liz Truss, the Foreign Secretary.”

He had a pet wolf called Boris, named after the former Russian president, Boris Yeltsin. Evgeny’s father, Alexander Lebedev, was once a KGB officer.