Respectable conservatism in the time of Trump 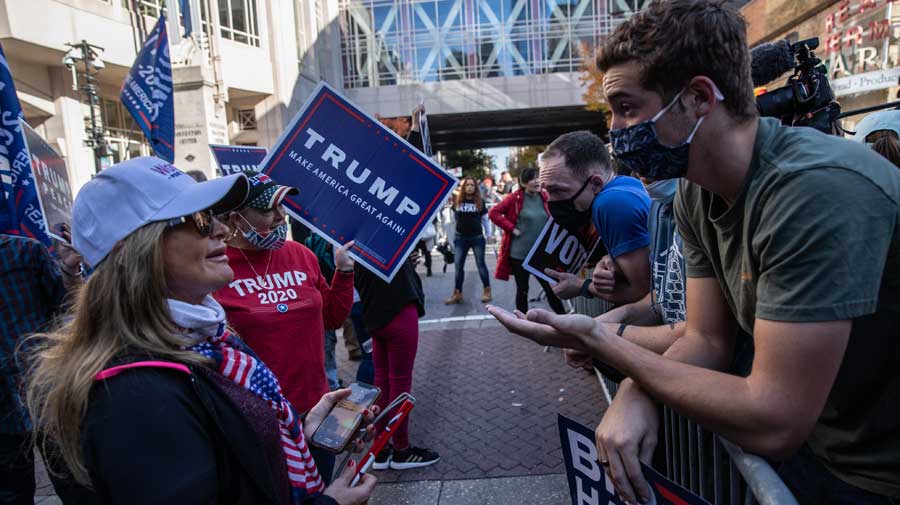 In these majoritarian times, some conservative pundits, embarrassed by the feral Right and keen to seem ideologically respectable, have found an all-purpose rhetorical manoeuvre which goes like this. Progressives are to blame for the enthronement of racist, communalist and majoritarian political parties because it is the left’s ‘wokeness’, its elitist disdain for the anxieties of ordinary people and their common sense, its infatuation with minority politics that prepared the ground for the rise of the ‘hard’ right.

This was the burden of Chetan Bhagat’s arguments in the course of a long interview with Karan Thapar. In country after country, fastidious, hem-raising conservatives are making the same case. Bhagat’s American counterparts argue that the reason majorities of white men and women in America voted for Donald Trump in two successive presidential elections had more to do with the smugness of liberals than the sense of white grievance that the Republican Party has cultivated since Richard Nixon inaugurated its southern strategy in 1968. By harping on racism and minorities and police brutality, progressives had driven a politically orphaned rust belt into the arms of a racist president. Had Democrats and progressives mobilized in an inclusive way, had they attended to the material needs of an alienated white working class, had they been nicer to them, Trump might never have carried the day in 2016 or have come so close to winning again.

It is notable how writers (righters?) embarrassed by brazen bigotry become materialists, reproaching progressives for being culture warriors, obsessed with race and identity politics instead of constructing a broad colour-blind liberalism focused on economic well-being and social welfare. This is, in fact, exactly what Barack Obama tried when he adapted for federal purposes a scheme for medical insurance first pioneered by a Republican governor, Mitt Romney, to extend healthcare to those Americans who couldn’t afford it. Much good it did him. All the familiar right-wing bogeys, from imminent socialism to lawless federal overreach in the service of the undeserving poor (read blacks), were invoked to stymie the Affordable Care Act, a modest measure that would have been unexceptionable in most first world democracies.

Conservative American writers who have supported dog-whistling Republican leaders from Nixon through Reagan to George W. Bush, who have ridden every culture-war hobby horse — from the right to bear arms, to abortion, to Christianity in the public square, to the right of religious people to discriminate against homosexuals — are now even-handedly appalled by the wokeness of progressives and Trump’s brutish ascendancy.

Take, by way of example, George Will, the best of the Never Trumpers. Will is a formidable conservative columnist, who, to his credit, was implacably hostile to Trump before Trump won the 2016 election. A long-standing Republican, Will enthusiastically supported Ronald Reagan’s candidacy and famously helped him with his debate preparation against Jimmy Carter. The real difference between Reagan and Trump in the matter of racism was that Reagan slagged off black people privately or by implication while Trump is franker.

Reagan’s stump speech about welfare queens was a long dog-whistle about dishonest black women gaming the welfare system. Trump, in contrast, has never made a secret of his bigotry. His long racist résumé, ranging from his campaign to execute the so-called Central Park Five (a group of black men falsely accused by Trump of assaulting and raping a white jogger) to his anti-Obama ‘birtherism’, to his enthusiasm for white militias, embarrassed sections of a right-wing commentariat, historically comfortable with discreet — therefore deniable — prejudice.

This is not to trivialize the difference between dog-whistling and open racism. Hypocrisy is the tribute that vice pays to virtue: when the Right casts off the need to dissemble and lets its bigotry show, you know a nation’s politics is in trouble. The difference between glowering men in mofussil shakhas muttering about ‘love jihad’ and the chief ministers of five states declaring their intention to pass a law against conversion and marriage is the difference between casual communalism and institutionalized bigotry.

Reagan kept his racism under wraps so admirers like Will didn’t have to distance themselves. But racism will out. In 2019, the US National Archives revealed that in 1971, when Reagan was the governor of California, he told Nixon over the phone how angry he had been to see Tanzanian delegates to the United Nations celebrating China’s admission to that institution: “Last night, I tell you, to watch that thing on television as I did... to see those, those monkeys from those African countries — damn them, they’re still uncomfortable wearing shoes!”

Even without such revelations, it is hard for Never Trumpers with buyer’s remorse to reckon with their past. It would mean acknowledging that their complicity in dog-whistling, voter suppression, gerrymandering and the covert racism of the modern Republican Party prepared the ground for Trumpism. That would be intellectual suicide; easier options beckon. One is to say that they held their nose in a higher cause: anti-Communism or economic growth or some other handy mantra. But even this compromises them. Much better to deflect the blame and argue that enthronement of the radical right was down to the perversity of the radical left. In the American version, it wasn’t the drip feed of Republican bigotry that encouraged majorities of America’s white citizens to vote for a racist in plain sight. No, it was the nagging shrillness of the Left and Obama’s patronizing remoteness that forced working class whites to vote for Trump.

Will has a cutting counter to the argument that it was racism that drove Trump’s coalition to vote for him. He writes sardonically that “... sooner rather than later, even Democrats will come to suspect that denigrating people until they vote for you lacks a certain strategic plausibility.” This is the same conclusion that many anti-BJP politicians have arrived at in India. To bluntly argue that a vote for Narendra Modi is a vote for communalism might be to lose the chance of persuading some of his supporters to change their minds. But the fact that politicians are constrained from calling a spade a spade shouldn’t keep a writer from calling out bigotry by its name. Racism and communalism in politics is a choice, not a permanent condition. When people stop making racist choices, they stop being racist. The writer’s task is to clarify not fudge the nature of the choice voters made when they chose Trump or Modi.

When commentators who cheered Modi on in 2014 now wring their hands about lynching and love jihad and claim that they gave Modi the benefit of the doubt only because he was an economic reformer, progressives should, without rolling their eyes, nod politely and move on. At best, these pundits were the feral Right’s useful idiots; at worst they knowingly boarded a dangerous bandwagon because they liked the buzz of being in the vanguard of the Hindu Turn.

That they see the light now is welcome. But when they claim that it wasn’t fellow travellers like them who helped deliver us into evil but bleeding heart liberals who warned against the predictable disaster of endorsing Modi, it is time to stop listening. At that point, it becomes evident that for some angsty conservatives, it was about the optics. They were put off by the full frontal barbarism of the feral Right. Had Trump or Modi walked sideways into Amerika or Hindu rashtra, they would have done the soft-shoe shuffle right alongside them.