Regional pride could be a strategy against the BJP 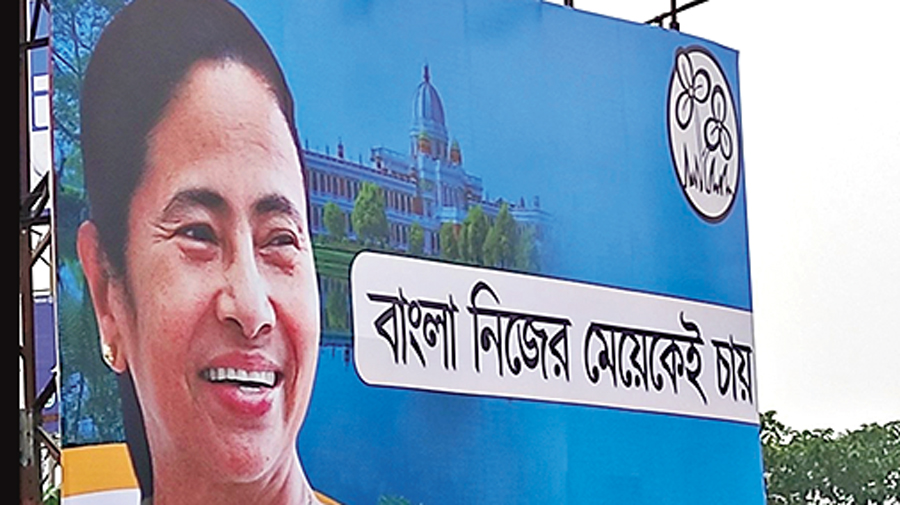 Over the last few years, a lot of media commentary has diagnosed the main political battle raging across India to be one between a secular and a Hindu majoritarian idea of India. In reality, that contestation has long been over. The hegemony of Hindutva in the political and cultural domain is clear from the fact that no recent electoral opponent of the Bharatiya Janata Party — from the Congress to the Aam Aadmi Party to the Trinamul Congress — has dared to launch a frontal attack on the ideas of Hindu nationalism. The political and ideological battle set to define India over the next decade seems to be a different one — one between a federal and a unitarian idea of India. The Bengal election might well be seen in retrospect as its most powerful curtain raiser.

In the midst of the Bengal elections, Mamata Banerjee wrote a strongly-worded letter to 15 Opposition parties, calling for a “united and effective struggle against the BJP’s attacks on democracy and the Constitution”. The letter listed evidence of the BJP’s designs to establish a “one party authoritarian rule in India”. This included the recent move of downgrading the powers of Delhi’s state government, the misuse of investigative agencies against Opposition politicians, and the withholding of funds towards non-BJP governments. Absent in the letter was any mention of communalism, secularism or Hindu nationalism.

The omission is curious because the BJP’s assault on federalism is deeply linked to the ‘one-nation’ ideology of Hindu nationalism. The Rashtriya Swayamsevak Sangh has long been an opponent of federalism since the days when M.S. Golwalkar opposed the linguistic reorganization of states, claiming that it would hurt national unity. However, Opposition parties (with the exception of the Dravida Munnetra Kazhagam and Kashmir-based parties) are loath to make the federal autonomy argument in terms of opposition to Hindutva lest it gives fuel to the communal polarization strategy of the BJP.

Even on the campaign trail, while Mamata Banerjee has been defensive on the issue of Hindu majoritarianism, loudly proclaiming her Hindu identity to blunt the BJP’s attacks, she has been belligerent on the state-Centre divide. In fact, she has sought to make the defence of ‘Bengali identity’ and ‘Bengali pride’ in the face of an authoritarian Centre the fulcrum of her campaign. This strategy has been replicated in the other poll-bound states as well. In Assam, the Congress and the AJP-Raijor Dal regional front have framed the election in terms of protection of ‘Assamese identity’ threatened by a BJP that imposed the Citizenship (Amendment) Act on Assam. In Tamil Nadu, the DMK has portrayed the AIADMK as a supplicant of the ‘Hindi-Hindu’ BJP, focusing on Tamil nationalism to drive its support. While regional identities have been skilfully used in recent years by Opposition parties to neutralize the BJP’s appeal — in Delhi, Jharkhand and Bihar — these elections still represent a qualitative change, where the state-Centre tussle has progressed to the forefront of electoral competition. This renewed salience of the state-Centre divide in Indian politics, perhaps at its strongest since the early 1970s, is only likely to intensify in the years to come — for two reasons.

First, the increasingly naked authoritarianism of the BJP. When the Narendra Modi government came to power in 2014, it combined its strategy of repression with the co-option of regional elites. The role of regional parties such as the BJD, TRS and YSRCP in the construction of the authoritarian structure in India is often under-appreciated. The BJD, TRS and YSRCP supported the government on all contentious bills, including the RTI (amendment) bill, the triple talaq bill, the UAPA amendment bill, the Jammu and Kashmir reorganisation bill, and (with the exception of the TRS) the citizenship amendment bill. In exchange for their support in Parliament, the BJP has maintained a cordial relationship with these parties.

However, as the next prized frontier of the BJP’s electoral machine shifts to Odisha, Telangana and Andhra Pradesh, it won’t be surprising if the hardball tactics of investigative agencies and an over-intrusive governor are unleashed in these states. It must be remembered that the National Democratic Alliance is now just nine short of a majority in the Rajya Sabha, and victory in Bengal might inch them closer still. The ruthlessness with which the BJP clipped the powers of the state government in Delhi, in contravention of an express Supreme Court judgment, provides enough evidence that neither constitutional propriety nor past instances of support (the AAP had supported the J&K reorganization bill) would be enough to deter the BJP.

India’s federal power structure was greatly strengthened in the 1990s, not out of conviction of the two main national parties — the Congress and the BJP — but as a result of a grudging accommodation of new political realities. No government at the Centre could function without alliances with regional parties that gave the latter enormous leverage with the Centre. The situation has now been completely reversed, with regional parties having few negotiating cards to play against the most powerful Central government since the time of Indira Gandhi. In proportion to its growing power, the centralization drive of the BJP has accelerated in virtually every domain — finance, law and order, education, health and agriculture.

Second, state parties and leaders have been left with little ammunition to build their political support and, therefore, might find in regional pride an increasingly attractive mobilizing mechanism. The increased financial devolution since the 1990s ensured that many chief ministers had the funds to carve out political constituencies based on welfare spending. This financial room, already constricted by the fiscal centralization brought by the GST, has all but disappeared with the fiscal crisis brought on by the pandemic. Matters have been made worse by the aggressive centralization of welfare schemes under the Modi regime with voters more likely to attribute credit to Modi for welfare schemes implemented by state governments. If the leaders of the government of Maharashtra are taking regular pot-shots at the Centre, most recently over the ‘favouring’ of vaccine distribution towards BJP-ruled states, it’s also because they are struggling to implement a positive welfare agenda.

It might be recalled here that one of the main reasons fuelling the anti-Congress, anti-Centre politics among regional parties in the 1970s was not just the authoritarian intervention of Indira Gandhi in non-Congress states but also her use of discretionary funds of welfare programs to favour Congress-ruled states. “The distributive politics (of welfare) under Indira Gandhi was intended to cause the opposition parties who formed state governments to fail both to meet popular expectations and repeat electoral victories,” wrote Chanchal Sharma and Wilfried Swenden in their book, Understanding Contemporary Indian Federalism.

It wouldn’t be surprising if leaders like Naveen Patnaik, K. Chandrashekar Rao and Y.S. Jaganmohan Reddy become less certain of their welfare-based political constituencies and become even more strident in their emphasis on Odia, Telangana and Andhra pride in the next round of state elections. Conversely, the BJP might double down on its welfare centralization and authoritarian tactics to make up for its weak organization in these states, as it has already done in others.

The long-term threat for the BJP is if most of these state parties come together in an umbrella coalition to face the Modi government in 2024, as Mamata Banerjee called for in her letter. One of the reasons the BJP could command a substantial Lok Sabha majority with a 38 per cent vote share was the fragmentation of the national Opposition, which was at about the same level as 2014, even if there was relatively more Opposition unity in some states such as Karnataka and Uttar Pradesh. This possibility of an anti-BJP umbrella coalition will depend on two factors. One, the performance of the BJP in these state elections, as any electoral weakness shown by the BJP will precipitate more calls for Opposition unity. And, two, the ability and willingness of the Congress to form a nucleus of a broad anti-BJP front. The growing enthusiasm of the Congress to cede space to regional parties, showcased both in its grand alliances in Bengal and Assam, is an interesting pointer in this regard.

Whether such a broad anti-coalition materializes or not, what is clear is that the most potent resistance to the BJP’s authoritarianism is made not in terms of secularism or even civil liberties, but in terms of regional pride. This will likely be the metaphor grounding the next major battle over the ‘idea of India’.