Physical space has its own importance in a democracy 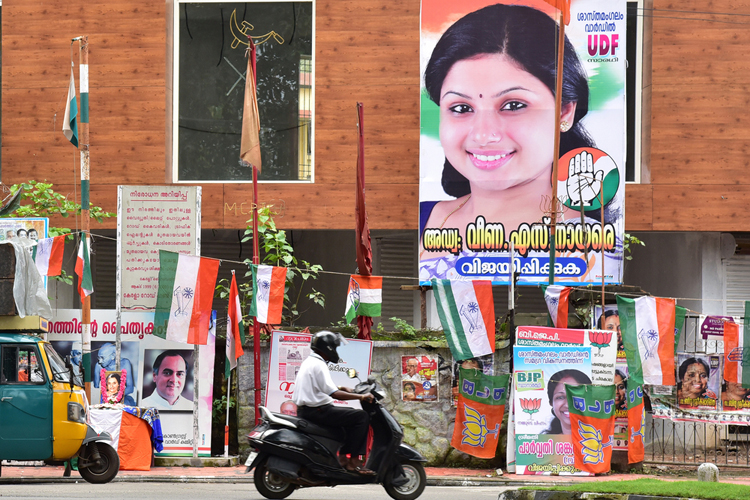 The ubiquitous presence of party symbols, larger-than-life portraits of political leaders and an indiscriminate occupation of streets and walls with political banners, slogans and posters reiterate the primacy of parties and leaders rather than people
(Shutterstock)
Nirupam Hazra   |     |   Published 04.12.19, 08:11 PM

Democracy, being a form of governance based on collective deliberation and decision-making, demands not only to be practised but it also requires to be seen to be performed. People in a democracy play the roles of the participant and the observer; they are performer as well as the audience. One of the most visible performative elements of a democracy is an election. In India, elections are like festivals — full of colour, clamour, rites and rituals. In the recently concluded general election, around 900 million people exercised their supreme democratic rights in a more or less free and fair environment to choose 545 law-makers who are likely to rule them for the next five years. These staggering numbers make the Indian elections the biggest spectacle of democracy in the world. However, if one wishes to learn what makes elections in India an event of intrigue, one has to look beyond these numbers and explore how the leaders and the masses engage with each other through various modes of political communication.

Political communication or canvassing has undergone many changes and become colourful, competitive and costly. With the advent of the internet, traditional modes of political communication with an extensive degree of public performance have made way for more convenient and customized methods of persuasion. The social media has radically changed the nature of political campaigns and public debates. An increasing tendency to transport democracy from the physical space to the virtual world is being observed across nations.

But physical space has its own importance in a democracy. John R. Parkinson, in his book, Democracy and Public Space, argues that the physical space is where democracy is performed and that the disappearance of political engagement from the public space in the long run will have a corrosive impact on democracy. The exchange between leader and masses, the dialogue between the two democratic adversaries in a public space, offers a qualitatively superior and collective experience of democracy than what the virtual space can offer. Although the internet played a pivotal role in many successful political resistances and democratic mobilizations, the centrality of the physical space in all these events cannot be overlooked. Making claims on space is a constitutive part of democracy. So, apart from the social media, the use of tools like wall-writings, banners and posters during election campaigns is a parallel exercise of laying claim over the political narrative and over the space where participants of democracy meet and debate.

The advantage of the traditional mode of political mobilization with all its paraphernalia is that the message is not overshadowed by the medium. It offers a larger background for a more inclusive and equitable exchange. But it has its own drawbacks. The hypervisibility of the tools of political campaign, especially during elections, has drawn criticisms, particularly for two reasons. First, the unequal claim over public space between political parties and citizens makes elections appear like a megalomaniac display of political ambition, while voters are relegated to the role of passive spectators. The ubiquitous presence of party symbols, larger-than-life portraits of political leaders and an indiscriminate occupation of streets and walls with political banners, slogans and posters reiterate the primacy of parties and leaders rather than people.

Another ‘ugly’ side of this phenomenon that often invites criticism is its impact on the aesthetics of public space. The Election Commission of India has imposed restrictions on the use of methods that are visually unpleasing or obtrusive. But these injunctions also run the risk of curtailing democratic rights by making elections ‘private acts of private citizens’. Not only electoral politics, but market capitalism is also to be held responsible for the way public spaces look. Commercial billboards enticing the consumer to buy products are no less obtrusive than the portraits of political leaders insisting voters to buy into their political promise. The important question is whether citizens in a liberal democracy guided by market capitalism ought to be reduced to mere voters and passive consumers.

In a liberal democracy, citizens need to be imaginative and fiercely protective of their rights and freedoms while engaging with the State and the market. Giving up freedoms to a populist political narrative or to the manipulation of the market monopolist will endanger the rights and shrink the democratic space. Therefore, the appropriate response of the citizens is to reclaim the space that they were made to forfeit, occupy the streets that lead to the mansion of exclusion and inequality, and paint those walls that have ‘status quo’ written large on it. Setting the political narrative is not the exclusive domain of the State or the political parties. Citizens have the right to write back, reclaim, and give expression to what is repressed. The process can start with a simple mural at the heart of the city, depicting the unfulfilled promises of our leaders or by writing a message on a wall adorned with slogans of cultural nationalism.

Such practices not only deepen the roots of democracy, but also give rise to a new of kind of aesthetic activism and democratic consciousness that are critical, creative and not visually displeasing.