Advertisement
Home / Opinion / Ranji is turning in his grave

Ranji is turning in his grave

Even as cricket lovers in India had their eyes glued to their team’s preparation for the first Test match in South Africa in a tour that is now turning out to be a bit of a nightmare, something remarkable — almost dreamlike — was unfolding in Indore. 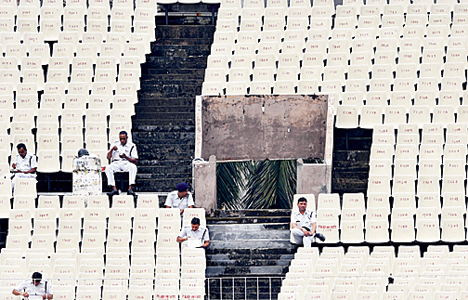 Even as cricket lovers in India had their eyes glued to their team’s preparation for the first Test match in South Africa in a tour that is now turning out to be a bit of a nightmare, something remarkable — almost dreamlike — was unfolding in Indore. Vidarbha was inching towards their maiden triumph in the Ranji Trophy, a tournament that supposedly serves as the feeder channel of talent for Indian cricket.

In a sense, Vidarbha’s success is not unexpected. The Board of Control for Cricket in India’s decision to share its monumental largesse with state associations has led to an improvement in the payment of, and the facilities available to, first-class cricketers . This is not to suggest that the BCCI’s Gross Revenue Share formula is perfect or, indeed, equitable. But it has made a difference. A former Vidarbha cricketer, who played for 21 seasons, said that along the way he had seen his meagre match fee of Rs 250 jump to over one lakh rupees. Deeper pockets for state associations have also meant better facilities. Nagpur has a modern cricket academy and Vidarbha now boasts of year-long indoor training facilities, better grounds and pitches, and, more importantly, the financial ability to draft outstation players. (Wasim Jaffer and the coach, Chandrakant Pandit, who played crucial roles in Vidarbha’s success, are Mumbaikars.) Cumulatively, all this means that they are no longer a featherweight in the Ranji Trophy. The fixture has seen three first-time champions in the last eight years, loosening the hegemonic grip of teams like Mumbai, Karnataka and Delhi. Ranji Trophy has thus been decentralized, making it more competitive.

Better teams and competitive matches should have made cricket lovers flock to first-class games. The BCCI has also decided to blood new venues to help the tournament spread wings. (Mysore, for example, hosted a final some years ago, while Cuttack was a semi-final venue in 2016.) Yet, the average attendance in first-class matches is quite dismal. This is why someone like Akshay Vinod Wadkar, the wicket-keeper who played a stellar knock against Delhi, is likely to remain unknown. It did not help that this year the tournament was telecast live only from the knock-out stages. The waning popularity of India’s premier first-class tournament, something that contributes to its lower visibility than, say, even the Syed Mushtaq Ali T20 trophy, is augmented by a deeper, more potent, malady. Is it true then that the cricket lover no longer identifies with a tournament that is premised on the idea of stoking regional pride and sub-nationalism?

It must be borne in mind that cricket has prospered in the subcontinent owing to the tensions generated by identity — religious and ethnic. The Pentangular, which featured five teams divided on explicitly religious lines, was immensely popular even though M.K. Gandhi had been anxious about its alleged communal undertone. After Independence, and until cricket was ‘globalized’, the rivalry among the states — it had mutated to become regional rather than communal — had been able to sustain itself. In Sunny Days, Sunil Gavaskar reminisced about the feverish excitement among players and spectators that had preceded a Ranji final between Bombay and Bengal.

But it is equally true that other tournaments seemingly based on identity, most notably the Indian Premier League, have tasted immense popularity and commercial success. That has been possibly because the wise men who thought of the IPL as an idea were prudent enough not to rely on identity-inspired rivalry alone. Such a contest can only be sustained, even acquire cult status, with the help of commercial appendages: handsome remunerations, expansive television coverage, international recruitments supported by a chic marketing apparatus.

There is a case for the Ranji Trophy to reinvent itself. The model could well be the IPL, but with important modifications. For instance, the meddling of corporates would have to be limited to sponsorship and infrastructure. They should be facilitators, of funds and marketing. Decisions pertaining to the competition should be left in the hands of those who understand the game.

The proposition is, admittedly, utopian. Whoever has heard of a pliant corporation? But the idea is worth emulating, if only to resurrect the Ranji Trophy.