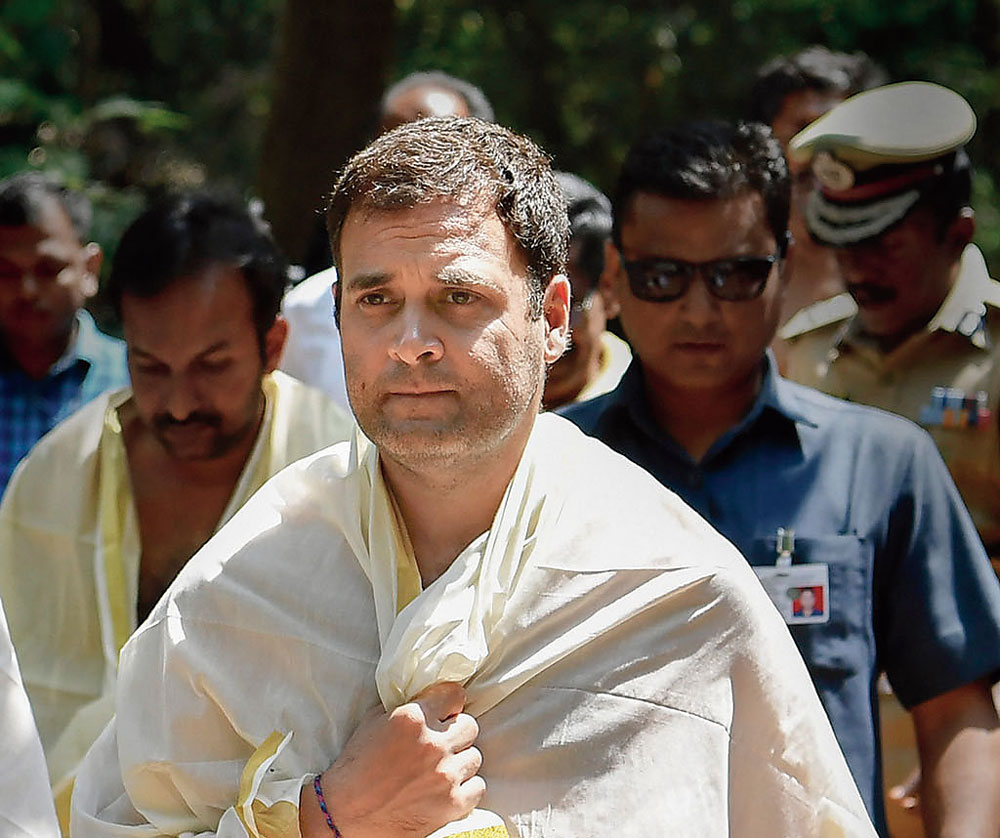 Most people in Wayanad have one common hope — that the Congress president, Rahul Gandhi, will retain that seat in the ongoing Lok Sabha elections and be their saviour. The chief of the All India Congress Committee had become an instant sensation when his party decided to field him from Wayanad, a constituency that is just two elections old. Many even view the election of Rahul Gandhi to the Lok Sabha as the silver bullet solution to all of their problems. While farmers expect the Gandhi scion to provide solutions to the water shortage problems and agrarian issues, the hospitality sector wants him to keep the forest road that links Bangalore to Wayanad functional even at night, as that is likely to improve their business. The Congress has reasons to be pleased. But if there something on which the Grand Old Party does not want to hazard a guess, it is whether Rahul Gandhi will keep the Wayanad seat if he wins in Amethi as well. 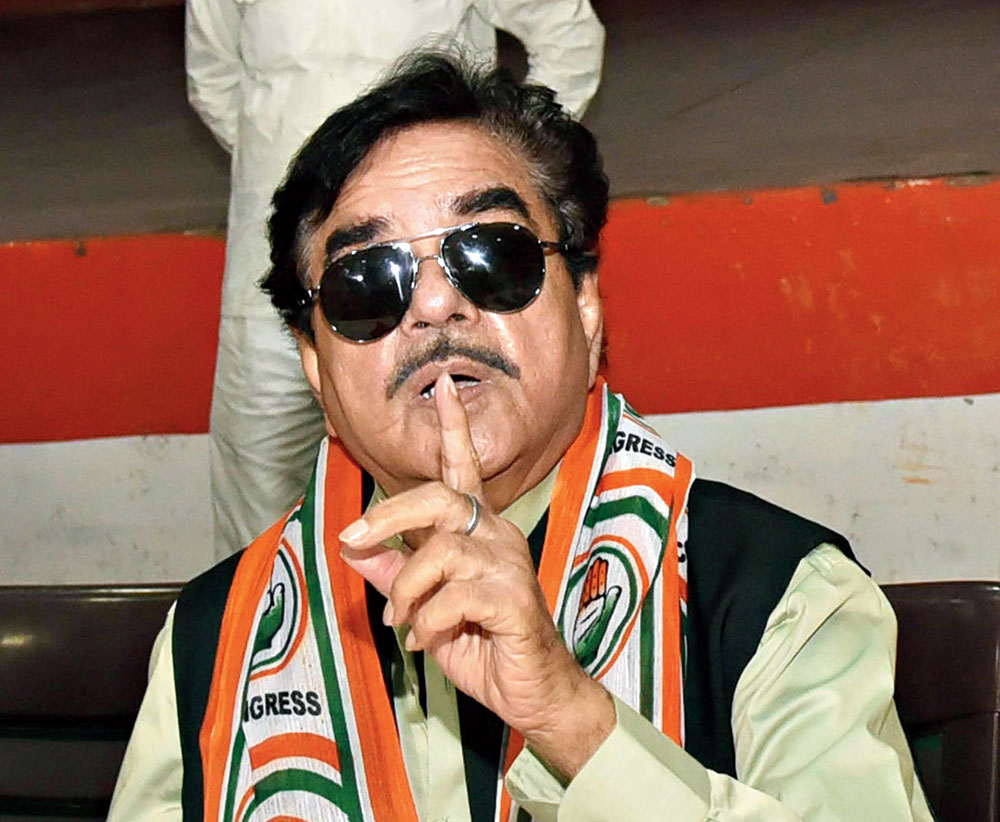 How Shatrugan Sinha might respond to his critics
PTI photo

The overconfidence of Shatrughan Sinha, who recently left the Bharatiya Janata Party and joined the Congress, has created quite a bit of unease among his well-wishers. Sinha has presumed that the Union minister, Ravi Shankar Prasad, cannot pose a threat to him and has invested more time in campaigning for Congress candidates across the country instead of concentrating on his own constituency, Patna Sahib, in Bihar. When a senior opposition leader cautioned Sinha that the Kayasth community is loyal to the BJP and not to him, and that Prasad is also a Kayasth, the actor-turned-politician laughed away the threat. He said that the loss could be compensated for by new supporters from the Congress and the Rashtriya Janata Dal. The leader who cautioned Sinha felt that the latter was so obsessed with his national stature that he refused to put his nose to the grindstone in Patna. “Congress ne ek helicopter de diya hai inko aur ye furr-furr kar rahe hai (The Congress has given him a helicopter and he is flying everywhere).” What will the Shotgun’s response to such talk be? “Khamosh,” presumably.

One relief that the Congress had ahead of the Lok Sabha elections in Rajasthan was the apparent truce between the chief minister of the state, Ashok Gehlot, and his deputy, Sachin Pilot. Party insiders have revealed that Sachin has more or less reconciled with Gehlot’s supremacy and is working in tandem with him, at least in the electioneering. He has gone to Jodhpur twice to campaign for Gehlot’s son, Vaibhav, who is making his electoral debut.

Congress leaders acknowledge the fact that things would have been worse if the two leaders had not put aside their differences, given the fact that the Narendra Modi factor was still at work in the state. The anger in the assembly election was largely directed at the then chief minister, Vasundhara Raje, as was evident in the slogan, “Modi se koi bair nahin/ Vasundhara teri khair nahin”. The former CM is almost inactive now, and is even perceived to have been sidelined in public opinion after the defeat in the assembly polls. Congressmen feel that this will act as a bonus for the party, as no other BJP leader in Rajasthan has either Vasundhara’s charisma or her clout.

Rahul Gandhi is not speaking against the president of the Bahujan Samaj Party, Mayavati, or the Samajwadi Party chief, Akhilesh Yadav, even in private, off-record conversations. He has given several interviews in the past month and invariably faced questions on the alliance in Uttar Pradesh, but has refused to attack the SP-BSP. He expresses regret that the Congress was not made a part of the alliance, as that would have restricted the BJP to five seats. But he insists that he will not be worried as long as the secular parties win the maximum seats, and points out that the SP-BSP is doing well.

The Uttar Pradesh unit of the Congress came up with a proposal for an effective attack against Mayavati and Akhilesh, but Rahul Gandhi did not approve it. They wanted to describe one of the leaders as an agent of the saffron party bent on creating confusion among the minority community, but the Congress chief asked the state leaders to focus on highlighting the prime minister’s flaws instead. He has, so far, looked past Mayavati’s strident posturing against the Congress. When a reporter asked him whether there was a tactical understanding between the Congress and the SP-BSP, Rahul chose to reply indirectly — he said that there is a unity of purpose among all opposition parties, and that the main target is the BJP.

Despite being unwell, the BJP patriarch, LK Advani, reached Gandhinagar on April 23 to cast his vote. The last time that Advani went to Gandhinagar as a normal voter and not as a candidate was in 1998. The sitting parliamentarian has represented the constituency ever since that year. However, he has now been replaced by the BJP chief, Amit Shah, as the candidate for Gandhinagar. While the effort of the 91-year-old Advani to go and exercise his franchise was praised by many BJP leaders, some wondered which way the upset patriarch may have voted. Party leaders claim Shah will win Gandhinagar by a record margin.

With the elections in the state over, politicians in Karnataka switched to rejuvenation mode. The CM, HD Kumaraswamy, didn’t waste any time in moving to a holiday resort in Udupi after polling ended. The former BJP state chief, Pralhad Joshi, got serious with his yoga routines, while Madhu Bangarappa, who challenged BS Yeddyurappa’s son, BY Raghavendra, on their home turf, Shimoga, moved to a forested area to be at one with nature. But it’s time to get back in shape for those in the ruling Janata Dal (Secular)-Congress coalition, as the BJP is back to trying to destabilize the government.