He is much more aggressive and firm than his mother, despite the public persona 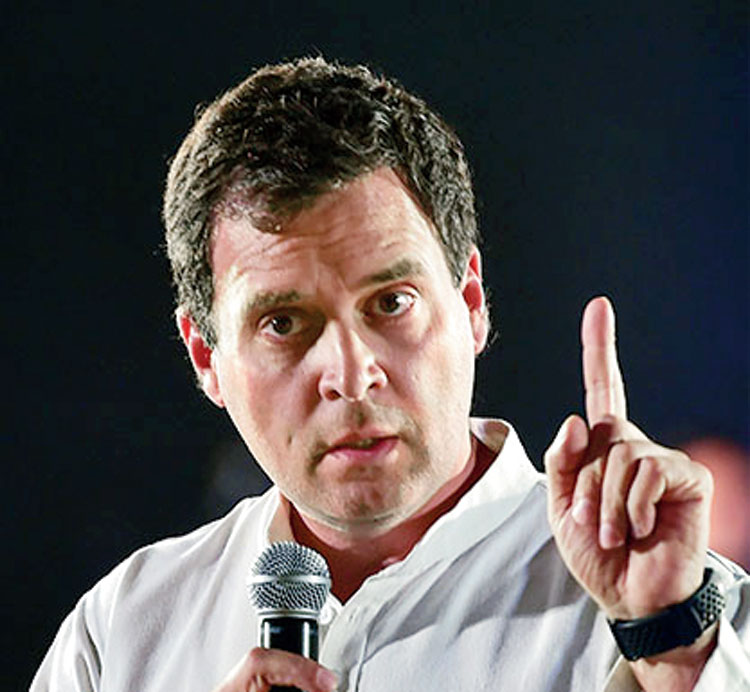 Too much of anything is not good, goes the adage. Word on the street is that the Congress president, Rahul Gandhi, might have overdone it with his ‘love and compassion’ rhetoric. The ‘infamous’ hug in Parliament which took the prime minister, Narendra Modi, by surprise is a perfect example. However, Rahul seems to have modelled his politics more along the lines of the robustness of Indira Gandhi’s policies rather than the softer stance taken by Rajiv and Sonia Gandhi. At his official residence, it is the photograph of his grandmother, Indira, that adorns most of the walls, outnumbering the ones of Jawaharlal Nehru or his parents Rajiv and Sonia. The reception of his residence has two photographs, both are of Indira. Most senior leaders privately admit that he is a no-nonsense, tough task-master who cannot be easily taken for a ride. If his exceptionally bold ‘chowkidar chor hai’ rhetoric proved to the world that he is not in awe of Narendra Modi’s apparent dominance in politics, his dealings in internal organizational matters and with individuals are more like that of Indira than his parents. While Rahul learnt his politics under the mild-mannered Sonia, who often adopted a consensual approach, he is much more aggressive and firm no matter what his public posturing is. If he unshackles himself from the invisible control of leaders surrounding him, he will emerge as a much stronger leader than he is currently perceived to be. Is that bad news for the party’s old guard?

Time to face the camera

The wheel of fortune is never static. Everyone has a turn to get to the top. The finance minister, Arun Jaitley, known for his media-management skills, had been the public face of the Bharatiya Janata Party. But it now seems that the law minister, Ravi Shankar Prasad, has assumed the role of the party’s key spokesperson. Is that because Prasad now is seen as a favourite of the party chief and the prime mover of the BJP juggernaut, Amit Shah? Prasad has emerged as Shah’s go-to man to address press conferences for the party in the run up to the general elections. Unsurprisingly, most of them are meant to launch scathing attacks on the Nehru-Gandhi family and the Congress. While Jaitley is busy writing blogs to articulate the government’s position, Prasad, also a lawyer like Jaitley, is clearly the party’s TV face.

Given the strenuous task, Prasad often appears worn-out from addressing more than one press conference in a day. But if his close associates are to be believed, Prasad is a happy man because Shah has finally picked him to contest the Lok Sabha polls from Patna. In spite of being one of the most visible faces of the BJP, Prasad has never contested a direct election. Ignoring his desire to face the people’s court, he was always made to take the Rajya Sabha route. But the open rebellion by the actor-turned-politician, Shatrughan Sinha, who held the Patna seat, came as a boon for Prasad. Being at the beck and call of the party to address press conferences is surely not too high a price to pay for a Lok Sabha ticket, especially at a time when fortune seems to be favouring him.

Dawn of a new era

While the wheel of fortune gives everyone a turn at the top, only the patient get there. When Amit Shah shifted base from Gujarat to Delhi along with Narendra Modi in 2014, many in the BJP claimed that he wanted to be back home as chief minister. They felt being the CM would be the high point of Shah’s political career. Names of possible successors of Shah as party chief were also discussed in party corridors. But Shah is a patient man and thus his fortunes have turned dramatically.

He is now being seen as Modi’s successor to rule the country. Led by the Vijay Rupani, the Gujarat CM, all senior members of his cabinet, landed in Delhi on Friday to welcome Shah’s candidature, replacing LK Advani, from Gandhinagar. Within the BJP, the tag, “close to Amitbhai”, is like a badge of honour. Party leaders feel that one cannot even hope to get a position in the Modi government if Shah is not on board. The sidetracking of the old guard, including members like Advani and Murli Manohar Joshi, is also being seen as a preparatory exercise for the elevation of Shah. Party leaders appear convinced that the Shah era will begin when the Modi era ends and positioning for it has already started in the saffron party.

Those at the top, will not always remain there. If Amit Shah is securing his place in New Delhi, the denial of a party ticket to LK Advani for the Gandhinagar seat has led many to ask whether the patriarch will have to finally vacate his Lutyens’s bungalow on 30 Prithviraj Road. Advani has been occupying the sprawling property since 2002, officially allotted to him first as the home minister and then as a veteran member of parliament. Many BJP leaders, however, feel that Modi and Shah may not be so cruel to the leader who built the party. He could be sent to the Rajya Sabha on the seat vacated by Amit Shah, once the latter gets elected from Gandhinagar. This would allow Advani to retain the bungalow. After all, home is where the seat is.

The film-maker, Karan Johar, angered Shah Rukh Khan fans on Twitter on Holi by ‘liking’ a tweet by a fan of Akshay Kumar, who made certain derogatory references to Shah Rukh in the tweet. The bhaang-induced stupor notwithstanding, #ShameOnKaranJohar was soon trending; Johar had to step in to clear the air and his timeline. He put the blame on a technical snag as a result of which “strange things” were happening, including the ‘liking’ of tweets he had not seen. But he soon went back to his laid-back self: “Aaj twitter pe thodi gadbad ho gayi but baaki sab #firstclass hai...” Had he then had a bit too much of thandai during Holi?