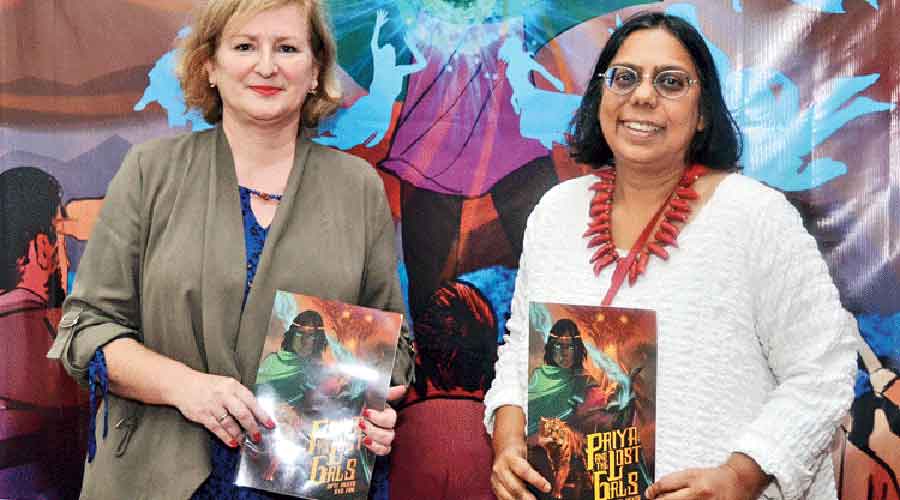 French consul general Virginie Cotreval and Ruchira Gupta with the comic
File picture
The Editorial Board   |   Published 06.12.20, 01:06 AM

Comics are not always comic, but they can still be unputdownable. In the land of powerful female deities, it seems apt that the first female Indian superhero should steal teenage hearts away. Priya, a gang rape survivor who becomes a superhero in the first work, Priya’s Shakti, in 2014, is a girl-next-door from rural India, distinctly unlike Wonder Woman or even Supergirl with her super powers. The brainchild of the New York-based technology expert and documentary film-maker, Ram Devineni, Priya has had four adventures so far, with the latest one situated in a world attacked by an invisible enemy, Covid-19. What is unique about this superhero is that her powers are kindness and courage, gained through painful experiences that mirror those of thousands of Indian women. Beginning with a touch of mythology, Priya’s narrative develops, as her creator says, along the central idea in many ancient Indian tales: the need to overcome one’s own fears. So Priya overcomes her fear and gains as her friend the flying tiger, Sahas, who carries her through the air to help women who are frightened and exploited, whether raped, trafficked or mutilated by acid attacks.

Priya’s success — she is called the “gender equality champion” by United Nations Women — springs from a unique combination of magical illustrations portraying Indian scenes with realistic situations in which sexually damaged women find themselves. There is no moralistic tone; teenagers hate that. The comic book form is accompanied by an augmented reality app and Priya’s Mask, in which the superhero fights Covid, has a short animation film. Here, too, the theme is of compassion, courage, understanding and, significantly, cooperation. It is a lonely little girl, Meena, whom Priya picks up on Sahas to fly over Jodhpur, Meena’s city, so she can see how much her mother, a Covid nurse, is doing for her patients. Meena also catches glimpses of her equally lonely friends, all forbidden to go to school or play together. This adventure is a reminder of children’s suffering from loneliness and confusion during the pandemic: they need far more attention and care. Even more pointed is Priya’s decision to join forces with Jiya or the Burka Avenger, the female superhero from Pakistan, to convey the message that Covid-19 must be defeated by acting together, ignoring national boundaries precisely in the manner of the virus, as much as by masks and hand hygiene.

That Priya should shift her attention, even for one chapter in her story, to the effects of the pandemic on children and ways to fight it, suggests that her appeal as a gender warrior is powerful enough to make messages about other frightening situations effective too. But the achievement of the comic book series lies in its attempt to give voice to Indian women, and to urge them towards overcoming their own fears. The outcome hinted at is not utopia, but an imaginable gender-equal Indian society