Given increasing government influence on primary education, we must ask who controls the substance of what children are taught. 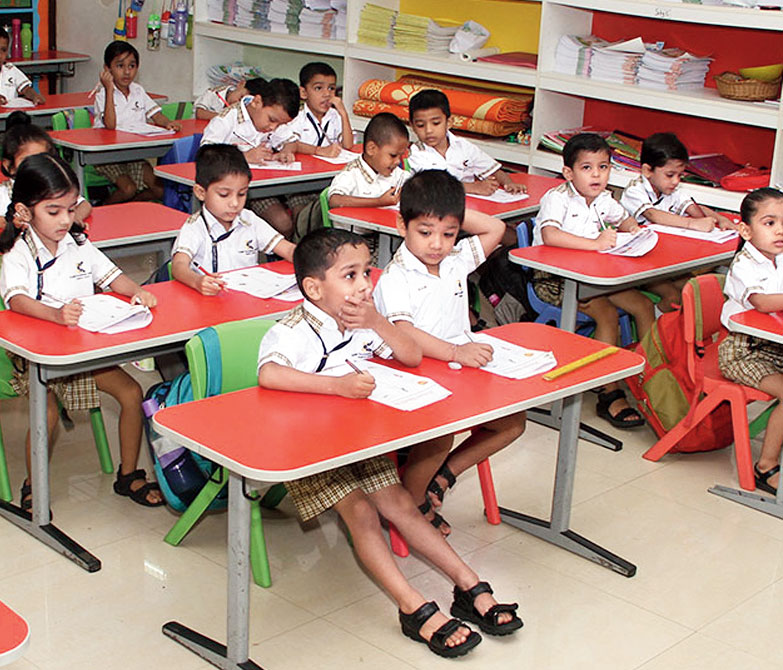 Education is an important human capability that is considered essential for economic development. Education helps one to know about the world one lives in, think, discover new facts, and create new objects of use. It also helps one in making informed decisions and choices. Education is useful to an individual in seeking employment or pursuing a livelihood. Education is apparently about acquiring knowledge, skills and some sensibilities. It is also about social control and shaping an individual’s mind to be in conformity with prevalent social norms and mores. There is a fundamental contradiction here. The former aspect of education must necessarily provide a broad menu of subjects and branches of knowledge to choose from. The more diverse the curricular options the better. On the other hand, the latter aspect, namely social control, implies uniformity and conformity. The former aspect is well discussed and analysed in terms of curricula, costs and funding, pedagogy, teaching technologies, and learning aids. There is relatively less discussion about social control. Social control is important too. While it helps preserve order in society, it also creates lasting impressions about the world, affects belief systems, and stifles creativity and the ability to question the order of things.

Social control is exerted through two distinct means, especially at the primary school level. The first is in terms of the school’s rules and regulations, the emphasis on punctuality, discipline, obedience and respect for authority. The second means is more subtle. It is done through the content of primary education. Usually one thinks of primary education revolving around the teaching of the three Rs — reading, writing, and arithmetic. These are the real tools of education. Without knowing the alphabet, basic grammar, numbers and their operations, and reading of language, one cannot proceed much further. However, in the age group 5-12 much more is taught than the mere basic tools mentioned. A number of moral values are formed during this period, identities are discerned, many preferences are shaped, and basic ideas are created about the world one lives in — how one relates to other people, to other living beings, and to the wider natural environment. These years are formative and the young mind is impressionable.

The problems of content become evident when students get their first lessons in history, social studies, geography, literature and general science. Students are told where life came from; science might say humans evolved, moral science class might assert that a divine creator made human beings. History teaches what one’s national identity is, what one’s social identity is, how geography and the environment help one lead different lives from people living in other geographies and environments. Along with the understanding of identity, the understanding of difference also takes place. At this stage, arguments are avoided; what the teacher says, or what the textbook says, is taken to be absolutely correct and complete. The content of the syllabus does matter. The teacher is usually required to confine her lessons to the text. The text is approved by a wider body that lies beyond a particular school — usually a school board with regulatory oversight exercised by policymakers and government officials.

Modern states exert control over, and influence, knowledge that young learners acquire. This is part of the process by which young children are taught obedience and the importance of order. This influence is a crucial part of the persuasive strategies of the State to ensure that the dominant ideology becomes acceptable as the most appropriate, and hence not to be questioned. The influences can be very subtle but lasting. Suppose that a social science textbook illustrates a lawbreaker as someone with a long beard. The child may begin to apprehend that bearded people are likely to be more dangerous than people without beards. History lessons typically begin with national histories. National histories always seem to segregate historical personalities into heroes and villains. Civics books talk about social stratifications that look like merely a division of labour.

It is in these senses that primary education induces sociability into the minds of children and drives out any possible deviant behavioural traits, reduces the gulf between the individual and society. Regularity and uniformity in behaviour become overarching objectives. Schools indulge in imposing strict universal codes like dress code,

attendance code, and code of manners which are consistent with the dominant culture of society. Penalties are imposed for failure to adhere to these. In this sense the school is also like a nascent police station or court of law. Stories of extreme violence hit the headlines quite often.

It is within this ambience that children begin to form opinions about who is a patriot, what it takes to be a good human being, what constitutes good citizenship, and how one reconciles individual advantage with a concern for others. If nothing much is discussed about non-violence, empathy, equality, tolerance and importance of diversity, then these considerations would become lower order issues for children as they imbibe basic values. Discipline, uniformity and regularity, then, teach the young children what one’s socially important identity is, manifested through what one wears, what one eats, who are considered heroes, and who one prays to and worships. Anybody who does not fall into this model is treated as a stranger not to be trusted or helped.

The real trouble is that educational institutions often forget that individual traits like duty, patriotism, loyalty, are good in moderation but should not be taken to extremes. If someone carried duty to an extreme by unquestioningly carrying out some particular notion of patriotism, the results could be horrifying as history has repeatedly shown. Bernard Shaw in the preface of his book, The Perfect Wagnerite wrote in 1907 that the mania to be seen as loyal and patriotic can lead to starvation, crushing economic woes, suppression of freedom to try out new social experiments and reform obsolete institutions. He also mentioned that the doctor, the schoolmaster, the lawyer and the priest could be more coercive than any state official or drill sergeant. Shaw wrote about these trends as he saw them in Germany. History, later, proved him to be tragically true in his assessment.

In India today, the State appears to exercise increasing influence on the content of school education. A uniform identity is being propagated in the name of patriotism and nationalism. The ability to question, or appreciate diversity, is being discouraged. Anyone who dares to question is frowned upon. In these days of increasing governmental influence on primary education, there has to be a debate on who controls the substance of what children are taught. Liberal democracies have the best of the best academics decide on the content of education. More autocratic States let dutiful bureaucrats and failed academics set the course for the future.