The ancien régime is under siege in Turkey and India 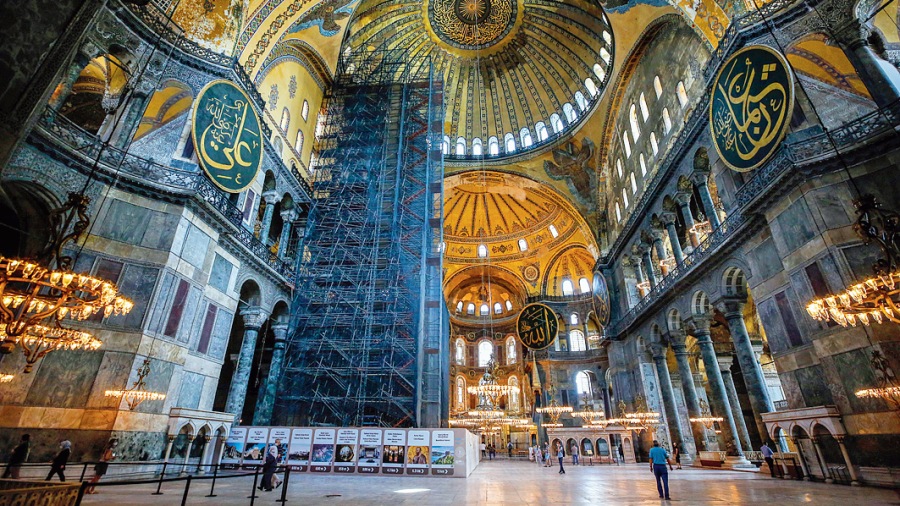 Turkey’s decision to reconvert the majestic Hagia Sophia monument in Istanbul into a mosque has led to near-universal dismay. Hagia Sophia, built as a church by the Byzantines, converted into a mosque when Constantinople fell to the Ottomans, turned into a public museum by Kemal Ataturk in 1934, will now, again, be open for namaz. The pope has expressed his deep pain at the reconversion; Unesco is concerned about the diminution of the universal heritage value of this world heritage site; political commentators have seen this as yet another example of the retrograde mindset of the strongman president, Recep Tayyip Erdogan.

Each of these reservations appears well-founded. But to condemn this move without understanding its impulses would be to add grist to the mill of polarization, de rigueur globally. The driving force behind this reconversion, the latest in a series of Byzantine monuments to be transformed with the help of civil society groups and the imprimatur of the judiciary, appears to be a calculated move to divert attention from Turkey’s plummeting economy and the coronavirus crisis. The fact that Hagia Sophia is Turkey’s most universally recognized monument and that any reclassification is bound to generate considerable controversy make this a plausible inference. But the deeper logic underlying this move, as with several of Erdogan’s past actions, has been to expressly repudiate Ataturk’s vision of a modern, secular Turkey. It is this repudiation and the consequent frittering away of the Western conceptualization of Turkey as a bridge between East and West that are at the heart of this move and its vigorous condemnation.

For Ataturk, Turkey could only achieve greatness if it expressly shunned Islam and adopted a new understanding of a homogenous Turkish nationhood. Much to the astonishment of Muslims worldwide and particularly in India who clamoured for a restoration of the Caliph after the First World War, Ataturk abolished the institution of the Caliphate itself. He changed the Turkish script to the Latin alphabet, passed the Hat law banning the fez in public, and aggressively removed any trace of Islam in public life. Its place was taken by the image of the modern Turk, Turkish by blood, but European in habit. As the scholar, Maidul Islam, points out, this was a Eurocentric model of secular-nationalism built on mimicking the West. Not only was it consciously Western in its trappings, but it was also founded on a Westphalian understanding that a homogenous nation state is the only way to stability and prosperity. Although its execution was bold and ambitious, there was nothing startlingly original about the vision itself.

In the same vein, Erdogan’s assault on Kemalism is just that — a startlingly unoriginal repudiation of Ataturk’s vision of a modern, secular, Westernized Turkey by resorting to a familiar trope of Islamism. This repudiation is taking shape in two ways in the specific act of converting the Hagia Sophia into a mosque — first, Turkey is expressly affirming its Islamic identity. In some respects similar to Iran and Saudi Arabia before it, it is carving out its identity as a nation state based on its Islamic roots, not despite it. Second, it is shedding its colonial detritus of Westernized modernity. It is making a renewed attempt to find something authentically Turkish without borrowing from the West, as its founding generation had done.

Although Erdogan is no friend of India, the parallels with India appear obvious. Jawaharlal Nehru, as the modernizing first premier of a newly independent republic, fashioning India, like Ataturk’s Turkey, on to a path of modernity; Narendra Modi, 70 years later, expressing disdain for Nehruvian modernity, articulating his vision of a strident India, more powerful than sympathetic, more conservative than modern. As proof of the new India is the under-construction Ram temple in Ayodhya, much like the reclassification of the Hagia Sophia, a development made possible by a favourable judicial order.

Though Nehru and Ataturk did have considerable sway in moulding public opinion during their respective premierships, in their views on creating a modern nation state, they were also reflecting and reinforcing the zeitgeist of their times. In India, a sizeable majority of the founding fathers of the Constitution, despite fighting two centuries of colonial rule, had internalized British attitudes. This is why the Constitution remains a document drafted by Indians but colonial in spirit. This is not meant to be pejorative but merely descriptive.

Deliberated and drafted in English, it follows the Anglo-American tradition of creating a modern nation state through a careful division of powers and a guarantee of fundamental rights. To ensure this, it devotes the bulk of its contents to establishing a State apparatus that is primed for ensuring stability. Most of these sections are simply a carrying over of the colonial-era Government of India Act, 1935. Its promises of social welfare are confined to the directive principles, moral strictures without any legal force. Its most original contribution, the chapter on fundamental rights, making the individual the basic unit of the polity, is radical. However, in this too, familiar tropes of State interests of law and order and stability derogate much from  its radical fervour. M.K. Gandhi had envisaged this possibility coming to pass in independent India — this would be English rule, without the Englishman, a veritable “English-stan”, he had written first in 1908.

The Ram Janmabhoomi movement was the first notable occasion when voices at the margins at the time of the country’s founding found full-throated expression. The movement and its logical culmination in the Ram temple being built in Ayodhya were reactions to decades of exclusion from being in the room where things happen. Over three decades, this has sharpened into a straightforward repudiation of what Nehru and the founding generation stood for. Like Erdogan’s Islamism, this is currently not a vision for the future but a repudiation of India’s immediate past while harking back to a time, a bit further back in the past, perceived as glorious.

Antonio Gramsci had written that the ancien régime must fall before a new order can be established. Independence movements in India and Turkey established a new order by overthrowing colonial governments but not colonial governance and universalist mindsets. Contemporary governments are latching on to what they see as the unfinished business from Independence at a time when the West is imploding and its values are at siege at home. In India, as in Turkey, the ancien régime today is still understood as a colonial one. Demolishing that requires more than the reconversion of a mosque or the construction of an awe-inspiring temple. But it is easy to see why some might think otherwise.

Did Recep Tayyip Erdogan turn the clock back on Turkey?