Advertisement
Home / Opinion / Others too: Recognise Sarna in Census

Others too: Recognise Sarna in Census 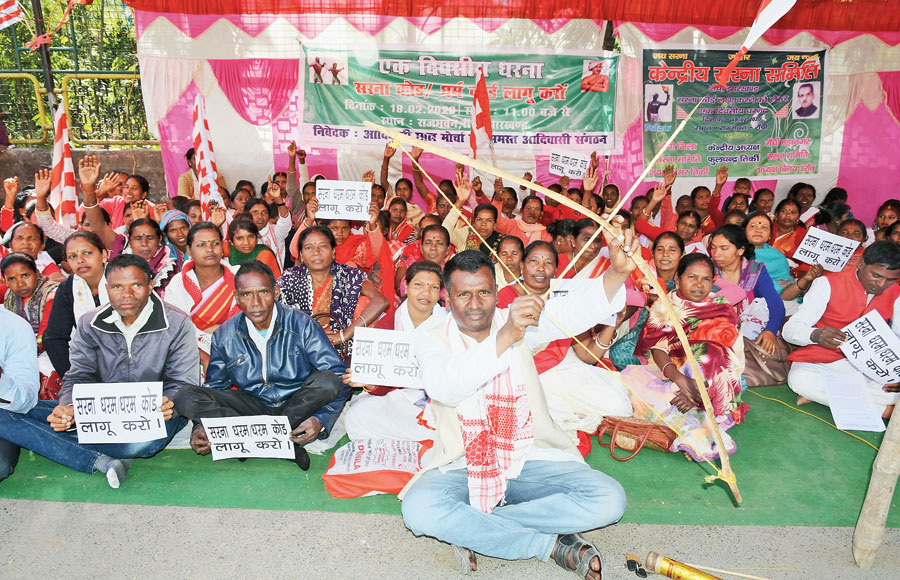 Members of the Adivasi Chatra Morcha and other tribal organisations on a sit-in to demand Sarna Code at Raj Bhavan in Ranchi on Tuesday.
Telegraph file photo
The Editorial Board   |   Published 17.08.20, 03:01 AM

Coercion has many forms. It can be direct, a way only too familiar nowadays, or it can be insidious, manifesting its effects gradually. The quiet narrowing down of choice of religion for the indigenous peoples of India on the census form is a good example of the second. On the census form in 1951, they had a column entitled ‘Tribe’, distinct from the named religions. This suggested that the religious beliefs of indigenous people did not have to be acknowledged with the ‘main’ religious systems. Different tribes were lumped together with numerically sparse populations, such as Parsis — there was no need, apparently, to distinguish among them. The disinterest in ancient animistic religions pushed a larger group of people than the followers of named religions, such as Jainism or Buddhism, towards a kind of anonymity — and the attitude remained unchanged. Later census forms had ‘Others’ as the extra column, which, however, allowed the noting of separate beliefs, such as Sarna, a form of nature worship followed by a large number of tribes. The demand to include Sarna as a separate column on the census form has been growing in intensity in the last few years, and the Jharkhand Mukti Morcha-led government that took over power in Jharkhand in 2019, promised to make this possible.

Now the apprehension that the 2021 census form will not even have the ‘Others’ column has led to the 32 tribal groups in Jharkhand threatening to boycott the census unless ‘Sarna’ is included under religions. Otherwise they would be forced either to not record their religion at all or to show themselves as adherents of Hinduism, Islam, Christianity, Sikhism, Buddhism or Jainism. The tribes of Jharkhand have promised to make this into a tribal movement covering all tribe-inhabited states, especially because they suspect that the removal of the ‘Others’ column is a Rashtriya Swayamsevak Sangh-Bharatiya Janata Party ruse to compel tribes to register under Hinduism. It would not be surprising if the indifference of earlier political regimes have cleared the way for Hindutva interests. Perhaps it is time to include columns under the heads of the main tribal religions as well as one marked ‘Others’ as recompense. The constitutional freedom to practise one’s own religion implies other people’s respect for it.