Art can be a harbinger of empowerment and transformation

Directors, producers, and financiers of cinema must take on the responsibility of being agents of emancipation 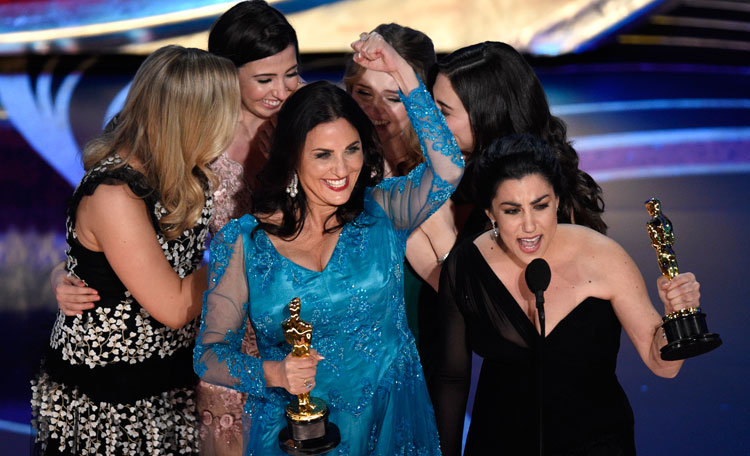 Melissa Berton (in blue dress), and Rayka Zehtabchi (right) accept the award for the Best Documentary Short for "Period. End of Sentence." at the Oscars on Sunday, February 24
AP Photo
The Editorial Board   |   Published 27.02.19, 03:33 AM

Should the success of the film, Period. End of Sentence, at this year’s Academy Awards be looked at as a watershed moment in the uneasy relationship between art and entertainment? The optimist may not dismiss the possibility entirely. Set in rural India, the documentary film — it has an Indian producer — is reported to be a sensitive portrayal of the war waged by a group of women on the entrenched prejudices associated with menstruation. That art can be a harbinger of empowerment and transformation has been proved repeatedly in the course of human history. Curiously, the entertainment industry — its reach is phenomenal — has been rather tepid in its response towards artistic projects that seek to engage with ugly realities on the ground. The prevailing idea is that popular cinema must entertain — not educate. Hollywood and India’s Hindi film industry have, more often than not, toed this line faithfully. Only a handful of films with realistic portrayals of social taboos — menstruating women are segregated and shunned in some cultures — have received recognition on global platforms such as the Oscars. Films dealing with the myriad everyday challenges faced by women are not made in large numbers either in the dream factories around the world. Perhaps this subtle discrimination was on the mind of the maker of Period. End of Sentence when she expressed her disbelief at a film on menstruation winning the prestigious award. It is not without reason that the jury at the Oscars has been accused of being conservative in its selections, bestowing honour on films that convey anodyne messages.

Yet, the real purpose of art, whether popular or earnest, is to realise its potential of transformation. Popular cinema can be a formidable tool of empowerment in the hands of imaginative craftsmen. What is required is to make the entire ecosystem of commercial cinema accommodating of a wider range of ideas and new imaginations. Not just directors but also producers, the financiers of cinema, must shed their caution and take on the responsibility of being agents of emancipation. That the box office does not appreciate meaningful cinema is a bit of a myth. A story well told, the creators of Period. End of Sentence have shown, would always have a receptive audience.

Pure darkness: Why should religion have anything to do with menstruation?