A Muslim citizen’s default state is a state of culpability 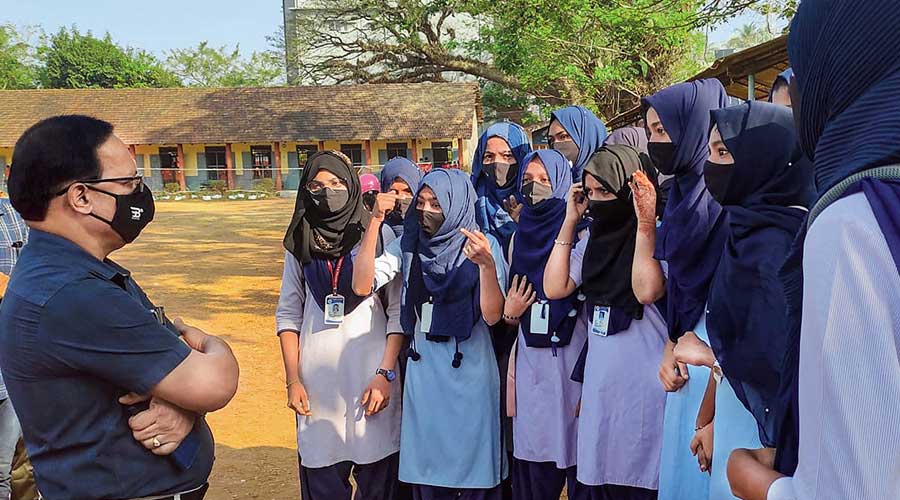 A faculty member talks with the students wearing hijab, after the school authorities denied them entry for wearing a hijab or scarf, in Kundapura of Udupi district, Saturday, Feb 5, 2022.
(PTI Photo)
Mukul Kesavan   |   Published 06.02.22, 12:01 AM

The hardest part of being Muslim in India today must be that neither the State nor civil society gives you the benefit of the doubt. The benefit of the doubt simply means choosing to believe people even when it’s hard to know with certainty that they are telling the truth. A Muslim citizen’s default state is not a state of innocence, but a state of culpability. When a Muslim is in the news, the reportage that swirls around the newsworthy event, the arguments on social media, turn on the assumption that the controversy is related to perverse behaviour initiated by the Muslim/s in question. We’ve seen two examples of this in the last week; one relates to high politics and the other to college education.

Asaduddin Owaisi was shot at while travelling in a car to Delhi from Meerut where he had been campaigning in the run-up to the elections in UP. Several shots were fired at the car, one of which punctured a tyre, forcing Owaisi to change vehicles. One of the accused has been implicated in a murder case before. He claims to be a member of the Bharatiya Janata Party and there are several photographs circulating online that show him in the company of BJP leaders.

Given the BJP’s hostility towards Muslims and the UP chief minister’s consistently communal campaigning style, you would imagine that this failed assassination attempt would be investigated in that fraught context. Instead, the statement issued by the additional director-general of police, law and order, Prashant Kumar, informed us that “The accused said they were hurt by his (Asaduddin Owaisi) remarks against a particular religion.” Less than two months ago, a Dharma Sansad in Haridwar organized by Yati Narsinghanand had repeatedly called for genocidal violence against Muslims and yet the ADG had found a way of suggesting that the alleged assassination attempt had been triggered by something Owaisi had said about Hindus. Long story short: he started it.

This state of mind is bigger than the BJP and its pliable police forces. Owaisi has been a member of Parliament for several terms. And yet, the response of his parliamentary colleagues from other parties was curiously muted in the aftermath of the shooting. The Congress, the Samajwadi Party, the Bahujan Samaj Party, which are the principal Opposition parties in Uttar Pradesh, didn’t immediately condemn this shocking assassination attempt. The reason for that isn’t hard to find. Owaisi is frequently accused of being in the pay of the BJP. His political excursions outside his home borough of Hyderabad are reviled as deliberate attempts to split the Opposition by siphoning off vital Muslim votes. So the first instinct of these parties is suspicion: is this a stunt? Will a concerted wave of sympathy help his cause? So even in extremis, even when he is at the business end of a bullet, Owaisi doesn’t receive the benefit of the doubt.

The irony is that Owaisi wouldn’t exist as a political force if the BJP hadn’t succeeded in making Muslims politically radioactive and if India’s Opposition parties weren’t so reluctant to acknowledge their political existence. The Aam Aadmi Party received an overwhelming majority of Delhi’s Muslim votes in the last assembly election and repaid these Muslim voters by being ostentatiously indifferent to the plight of Muslims in the subsequent riots in northeast Delhi. This is something of an electoral template: solicit Muslim votes furtively lest it hurt your cause with Hindus or, better still, just take them for granted, because where will they go?

One possible answer to that rhetorical question is — to the likes of Owaisi. Muslims in India have overwhelmingly voted for non-denominational political parties for the same reasons non-Muslims have: conviction, opportunism, principle and profit. Partition made the politics of religious community impossible for Muslims. But now, when India’s ruling party is proud not to count a single Muslim in its phalanx of Lok Sabha MPs, when the leaders of Opposition parties vie with one another to enthuse about Ayodhya’s Ram Mandir, when the BJP has succeeded in creating a Muslim-mukt Bharat in the realm of politics, a party like the All India Majlis-e-Ittehadul Muslimeen that articulates explicitly Muslim needs and anxieties becomes inevitable.

If Owaisi didn’t exist, we would have to invent him. Muslims constitute nearly twenty per cent of UP’s electorate: when parties pretend that they don’t exist, when Priyanka Gandhi and Akhilesh Yadav distance themselves from Muslims leaders that their parties are allied to, they create a political vacuum that begs to be filled. The virtue or wickedness of Owaisi is beside the point: he didn’t start this, just as he didn’t hothouse the hate that allowed the wannabe assassin from Noida to believe it was open season on Muslim politicians. Owaisi is addressing a political disenfranchisement designed by others.

In exactly the same way, though in a very different context, the responsibility for the stand-off at the Udupi pre-university colleges doesn’t lie with the hijab-wearing girls denied admission to class rooms. It’s the college authorities who chose to outlaw the hijab and then argued, falsely, that the parents of the affected students had signed an undertaking to that effect. But it would be a mistake to concentrate on the minutiae of a college’s uniform rules. Whether they know it or not, the college authorities and their political patrons are invoking a larger principle, the principle of uniformity built into the French construction of secularism, laicité, and we should address the salience of that principle in the context of our republican history.

It’s important to note that the hijab-proscribing colleges are government colleges. State institutions are bound by a duty of even-handedness. The girls wearing the hijab argue that it is integral to their religious identity. The reason this is a powerful argument in India is that the country’s government institutions and uniformed services make at least one sartorial exception on religious grounds: the patkas and pugrees that Sikh boys and men wear. There is a historical reason for this: the colonial army was disproportionately dependent on Sikh recruitment in the Punjab and created Sikh regiments where the criteria for entry mandated rigorous adherence to the five Ks which included, of course, long hair, kesh, and the concomitant turban. The soldier’s turban became an institutionalized precedent.

Thanks to the Sikh diaspora and its enthusiasm for uniformed employment, the turban has proved to be a global challenge to the shibboleths of laicité. One Western country after another has changed the uniform rules of its armed forces to accommodate Sikh soldiers and every exemption has undermined the dogmatic and faintly sinister notion that absolute public uniformity is the soul of secularism. The principals of these Udupi colleges should be asked if they would admit turbaned men. If they say yes (as they must), they must admit hijabi women. If they choose not to, it should be clearly understood that they are actively discriminating against Muslims.

It has been argued that the hijab, unlike the turban for Sikhs, is not integral to Muslim identity, if only because so many Muslim women choose not to wear it. There are many Sikh men who don’t wear the turban; I can think of two in the current Indian cricket team. That doesn’t make the turban less central as a symbol of Sikh identity for those who do. All religious communities contain a range of practice. It’s impossible to find an argument against the hijab that doesn’t apply equally to the turban, including the argument from gender.

Indians are free to dislike and vigorously express their dislike for Owaisi and the hijab. What they should be careful of doing is blaming Owaisi and the young students for the predicaments they find themselves in. The girls didn’t make their hijabs an issue; the colleges did. Owaisi, it’s safe to say, didn’t ask to be shot at. They were both ambushed and we owe them both solidarity and concern.