The BJP president now sits in a ground-floor lounge of the party headquarters, so as not to jeopardise its poll chances 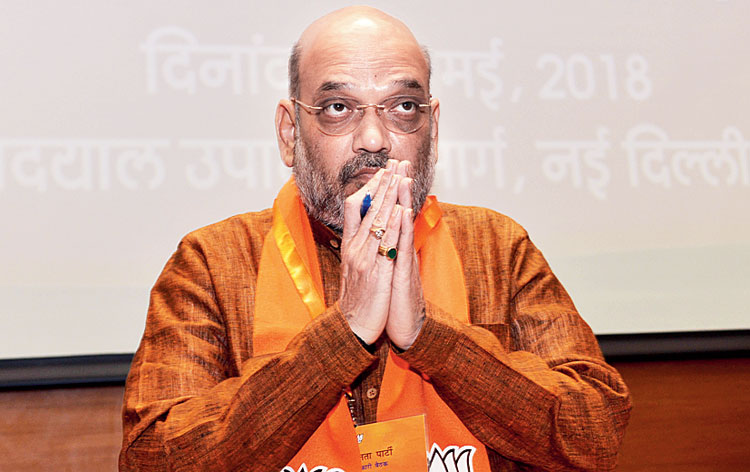 When it comes to winning elections, nothing can be left to chance. More so given the passion and obsession of the Bharatiya Janata Party president, Amit Shah, with polls. Hushed voices in the corridors of the BJP say that Shah has virtually abandoned his plush fifth-floor office in the newly-built party headquarters. He has, instead, started sitting in a ground-floor lounge of the headquarters. The switch, according to informed sources, took place on the advice of a prominent astrologer. The latter is believed to have evaluated the fifth-floor office and come to the conclusion that it was not auspicious for the party chief in view of the upcoming general elections.

Taking the advice, Amitbhai, as he is addressed by party leaders, has relocated to the ground-floor lounge, which was considered a better alternative. His office at the previous party headquarters, 11 Ashoka Road, in Lutyens’s Delhi has also been made functional. The election “war-room” of the BJP has been stationed in the old headquarters and Shah spends time in his office there too, for meetings with party leaders. The results of the Lok Sabha elections will be known on May 23, and it will be a test of the effectiveness of the astrologer’s advice. Party leaders, however, feel that the impact is already being seen in the steady stream of rivals from the Opposition camp lining up to join the saffron party. 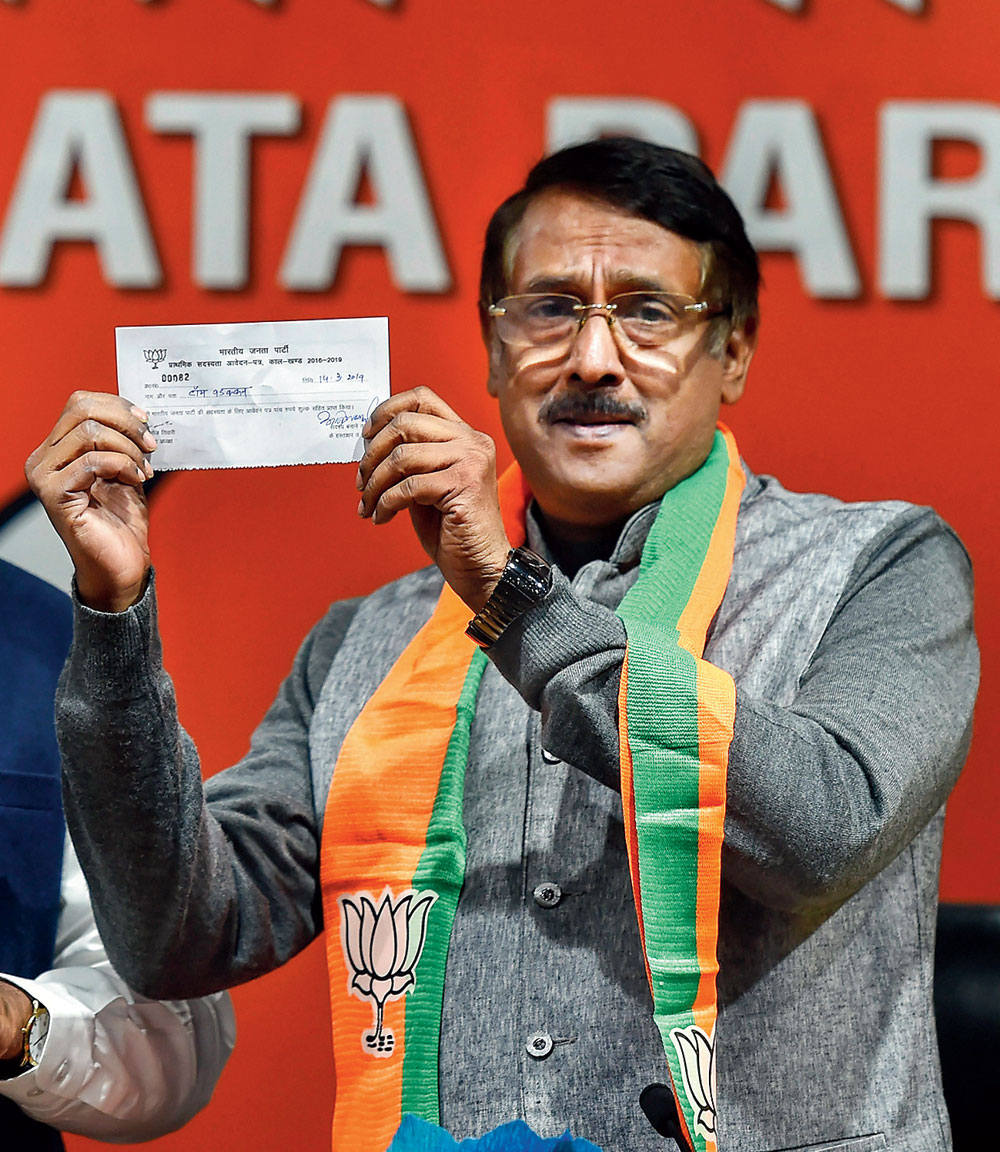 Tom Vadakkan: a prize catch for the sangh
The Telegraph file picture
Advertisement

The defection of the Congress leader, Tom Vadakkan, to the BJP was kept a closely-guarded secret by the latter’s managers. Not even reporters who claim to be embedded in the BJP’s system got a whiff of the switch made by the Sonia Gandhi loyalist to the saffron party till such time that he appeared on the stage at the BJP headquarters on Thursday. Leaders in the BJP termed it a “surgical strike” on Sonia Gandhi’s home.

Internally, “Operation Tom” was carried out by the Rashtriya Swayamsevak Sangh ideologue and member of the Rajya Sabha, Rakesh Sinha. For the sangh, Vadakkan, a Roman Catholic from Kerala, was a prize catch. It is not difficult to see why; Kerala figures prominently in the sangh’s scheme of things.

In this age of in-your-face politics with no space for nuance, the Gandhi siblings appear to be injecting subtle messaging into the discourse. In her first big public speech after becoming an office-bearer of the Congress in Gujarat on Tuesday, Priyanka Gandhi changed the conventional pecking order for addressing the public from “bhaiyon aur behno” to “behno aur bhaiyon”. No one noticed till it was tweeted the next day by the president of the All India Mahila Congress, Sushmita Dev. Priyanka quoted Dev’s tweet, and also tweeted back with a winking emoji, “... and I thought no one noticed!!” She also changed her profile picture on that day. Gone was the sari-clad look; in place of that was a picture of her in jeans, a shirt and hiking shoes, sitting somewhere in the woods. It was also the day that her brother, the Congress president, Rahul Gandhi — kitted out in jeans, a t-shirt and sports shoes — wowed young college students at Stella Maris. This was clearly a shout out to India’s first-timer voters.

The name, Danish Ali, is familiar to the Kannadiga people on account of his close association with his party president, the Janata Dal (Secular) supremo, HD Deve Gowda. But few know that the JD(S) general secretary is a late riser. When Deve Gowda met the Congress chief in Delhi one morning recently, Ali was supposed to have been there. But given his propensity to rise late, Ali missed the meeting. However, never one to waste an opportunity, Ali took the first flight out to Kochi and waited for Rahul Gandhi after sundown. A brief meeting at the airport and the seat-sharing list that was awaiting Rahul’s nod was cleared. Perhaps now Ali will not mind being an early bird — at least until the general elections are done and dusted.

The architect of the controversial ‘loan mela’ of 1984, Janardhana Poojary, could be a thorn in the Congress’s side in the polls. The leader from an OBC community was once the mainstay of his party in coastal Karnataka. While he has lost a lot of that muscle, Poojary could be a headache to the Congress as he has threatened to contest the polls as a rebel if the party picks the “corrupt” MN Rajendra Kumar for the Dakshina Kannada seat. Like his messy ‘loan mela’, which offered Rs 5,000 with a 30 per cent subsidy to anyone with a ration card and earnings below Rs 3,000 a year, Poojary could cause a few problems for the Congress as it tries to wrest the seat from the BJP. 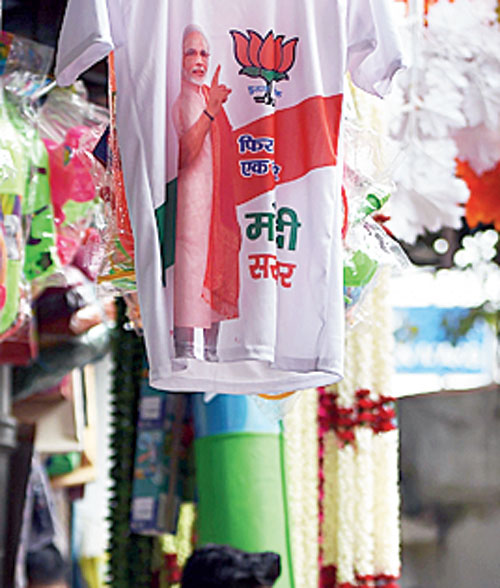 'Merch' ado about nothing? Narendra Modi's face may adorn fan merchandise, but many question the outcomes of his leadership
The Telegraph file picture

It is widely felt in BJP circles that the prime minister, Narendra Modi, believes that he is the ‘chosen one’, tasked with restoring the pre-eminence of Bharat. When asked about this, a senior minister had a different take: “Whether he believes it or not, I don’t know but I believe he is indeed an ‘avatar’ [re-incarnation].” The minister’s reasoning was thus: “No normal human being can work as much as Modiji does.” What, then, about the results of all that work?