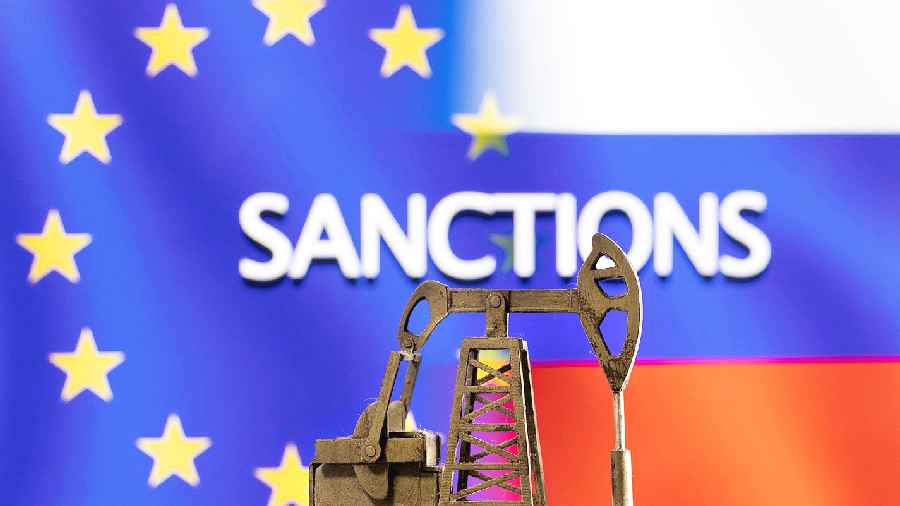 Will post-war Europe now become a new ‘fortress’ Europe — more tightly welded together by an external threat?
Sourced by The Telegraph
T.C.A. Raghavan   |   Published 18.05.22, 02:54 AM

Almost three months into the war in Ukraine is sufficient for a perspective on the transatlantic polemics it has generated. Whether it is viewed as an ordinary — or even extraordinary — geopolitical tussle or as a more fundamental clash of value systems, some things have definitely changed, and that change will persist no matter when and in what circumstances the conflict finally ends.

Most evident is the transformation in Europe’s self-conception that it had become some kind of a “Postwar” entity — to borrow the title of a bestselling history by Tony Judt some years ago. This sense of itself as a region which had remade itself and moved beyond wars has certainly received a battering from which there will be no quick recovery. The scale of German rearmament and the movement of Finland and Sweden away from a position of neutrality are among the many other signs of this.

Will post-war Europe now become a new ‘fortress’ Europe — more tightly welded together by an external threat? What has certainly contributed to this closeness in the popular imagination has been the surprising military resistance put up by the Ukrainians. Not for the last time, nationalism has demonstrated its potency and staying power. But that this is happening in a continent that had suffered its terrible consequences and took a certain pride in having transcended the tyranny that nationalism imposes is ironic.

Military operations do not entirely define this conflict; it is the economic weapons that are the most striking. The Russian economy is in the cross hairs of a magnitude of sanctions that dwarf earlier targets of the United States of America or of the Western geopolitical ire — Iran, Myanmar and others. Yet sanctions as an instrument of coercive power in the post-Cold War world have been gradually refined and Myanmar, Iran and others were part of the American and Western learning curve. Russia is receiving the result of that long experience. Their cumulative effect on the Russian economy will be to subject it to a massive blow whose impact will be felt for long. The social consequences of these sanctions on living standards and quality of life will be equally adverse. Whether they will have the intended geopolitical impact is a different matter. The examples of Iran, Cuba or even Myanmar suggest otherwise. Much like military measures, economic and financial pressures also stiffen national resistance.

In one of those rare coincidences, an academic work on the history and efficacy of modern sanctions as a means of coercive diplomacy appeared just as the Ukraine conflict began. In his book, The Economic Weapon: The Rise of Sanctions as a Tool of Modern War, the historian, Nicholas Mulder, describes how sanctions came to be a principal instrument of US foreign policy over the years and especially so after the end of the Cold War.

Sanctions had, however, emerged in their modern form from the slaughter of World War I and for the League of Nations these would be the preferred instruments that would keep future aggressors in check. They did work in some cases in deterring inter-state conflict. Yet, against Japan, intended to restrain its armed expansion, sanctions and, in particular, the comprehensive economic measures taken by the US had the unintended and opposite consequence of provoking the very conflict that sanctions were meant to sidestep.

What the consequences of the comprehensive sanctions on Russia will be are difficult to say but they hang very visibly in the air. The lines that have been drawn are not reassuring. Even more ominous is how consciously an older imagery of World War II is being invoked although the respective protagonists today are, of course, different from those of that titanic conflict.

In March 1941, the US Congress had enacted the Lend-Lease Act — a massive effort to assist Britain, China and other powers then battling Germany in Europe and Japan in Asia. The Soviet Union would also be a beneficiary following the German invasion of its territory. This template has had a reflowering last week when President Joe Biden signed into law the Ukraine Democracy Defense Lend-Lease Act on May 9. Perhaps as significant as its content in terms of facilitating aid and defence equipment flows to Ukraine is the eight-decade-old precedent it recalled. On the same day, the US First Lady, Jill Biden, also made an unannounced visit to Ukraine. To the cynical eye, it may appear that Ukraine is the means to wipe the humiliation of Afghanistan away. But the present conjuncture may be larger. The date — May 9 — is important because it marks the day that the Soviet Union finally triumphed over Nazi Germany in 1945. Elsewhere in Europe, the victory over the Nazis is observed on May 8 — the Nazis had surrendered in Berlin that evening in 1945 by which time, because of different time zones, it was May 9 in the former Soviet Union. This year, in capital after capital in the Western alliance, the commemoration of their victory over the Nazis was entirely framed in the context of the war in Ukraine and as another conflict to defeat totalitarianism.

The Ukraine conflict makes May 9 particularly significant this year. For President Vladimir Putin addressing the traditional victory day parade in Moscow, the Russian military action in Ukraine was to de-Nazify it and also to arrest a Western strategy of encroaching into its periphery. This is not the first time he has said so but the longer the conflict continues, the greater becomes the investment in its success, even if it means throwing good money after bad.

When contemporary conflicts overlap with older symbolisms, it is usually a very bad sign. Both sides wrapping themselves in the clothes of World War II is just that. Together, these two opposing and now almost fully-crystallised retro projects underline the need for the United Nations to be more effective and for India and like-minded countries to push it harder to be so.

T.C.A. Raghavan is a former High Commissioner to Singapore and Pakistan