Oktoberfest in the Big Apple 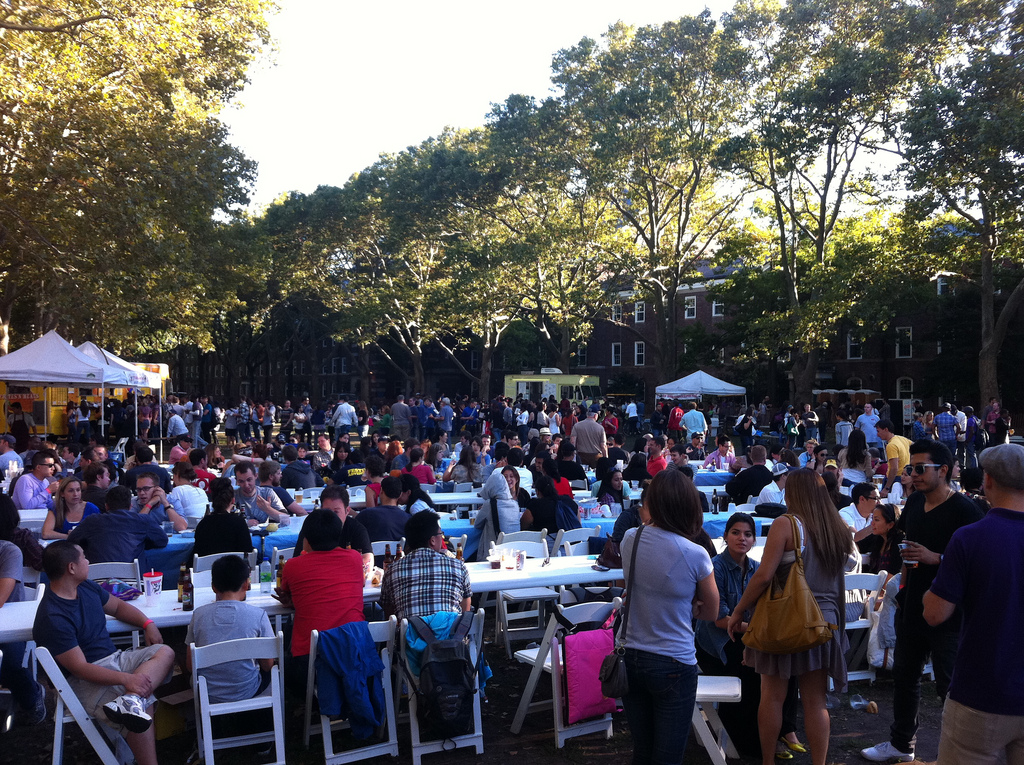 Many farms around the US are bringing in animals to be present with you while you practise your yoga poses. Yoga classes with goats and other animals are hosted in a barn at Downs On The Farm in Amherst, a farm that rescues neglected animals and hosts animal-assisted activities for those with disabilities. In Ohio, alpaca yoga was introduced on a farm just some distance away from city life. As the guests settle into cat postures, the alpacas are lured in with sprouts. They hover on the edges of the yoga class and watch the participants at first. With each class, the alpacas move closer.

BarnYard Yoga in Cleveland takes it a step further and invites all the barnyard animals. Being active with animals is actually more beneficial than just looking at them.

Animal-assisted activities have been shown to increase people’s moods and improve their overall well-being. In Indianapolis, people are now sharing pictures of bunny yoga. The Metazoa Brewing Company is a brewery that brings in (litter-trained) rabbits for a 75-minute session on the first Saturday of each month.

Goat yoga originated at a child’s birthday party at the No Regrets Farm in Oregon. The child’s mother, also a yoga instructor, asked the farm owner if they could hold a yoga class after the party. When Morse’s goats started interacting with the kids and parents during the class, the idea for goat yoga was born.

Yandy, a women’s clothing store that launches ‘sexy’ Halloween costumes each year, has now taken it a step too far. It recently put a low-cut, red-cloaked, white-bonnet costume, straight from the television series, The Handmaid’s Tale, on sale for $64.95. However, the symbolic meaning of the costume is far removed from what the costume tries to portray. In Margaret Atwood’s 1985 novel of the same name, handmaids are women who have been captured by a militant (and misogynistic) government in a dystopian society to be used as sex slaves and baby incubators for the wealthy. Twitter saw an outpouring of protest against the brand for its choice of costume. Yandy had to take the costume off its website and apologize. In a statement, the company said the costume was initially inspired from its use in a number of recent protest marches.

If you cannot make time to fly to Germany, you can certainly spare a few minutes to relish beer and pretzels in New York City. It is time for the Oktoberfest, and New York has taken the number one spot in rankings of the best places in the United States of America to celebrate it in 2018. WalletHub, the personal finance website that created the rankings, compared 100 of the country’s largest cities based on how well they balance cost and fun. They were ranked based on factors like the number of beer gardens and the volume of the German population.

Oktoberfest in New York takes place in all five boroughs at various public spaces and beer gardens. The largest events include Oktoberfest in Central Park, Munich on the East River and Watermark’s Oktoberfest. In spite of its name, Oktoberfest begins in September so that Germans can celebrate their beer and music into the warmer nights. In the East Village, for the fifth year running, the German restaurant, Zum Schneider, is erecting an Oktoberfest tent on the East River. Pretzels and bratwurst are on the menu, along with traditional roast chicken and pork shank. Some people also go on a pub crawl; a $60 ticket for the 10-hour crawl gets you a 12-ounce German beer at every bar along the way and a few German drinking songs.

If city life is not your thing, head on to The Catskills. The scenic mountain range is 2.5 hours outside NYC, but its all-autumn-long Oktoberfest has been ranked number nine in the nation. With games, food and beer every weekend, Hunter Mountain also hosts a Eurocar Rally and cider tastings. Portland and Cincinnati took the second and third spots on the list respectively. 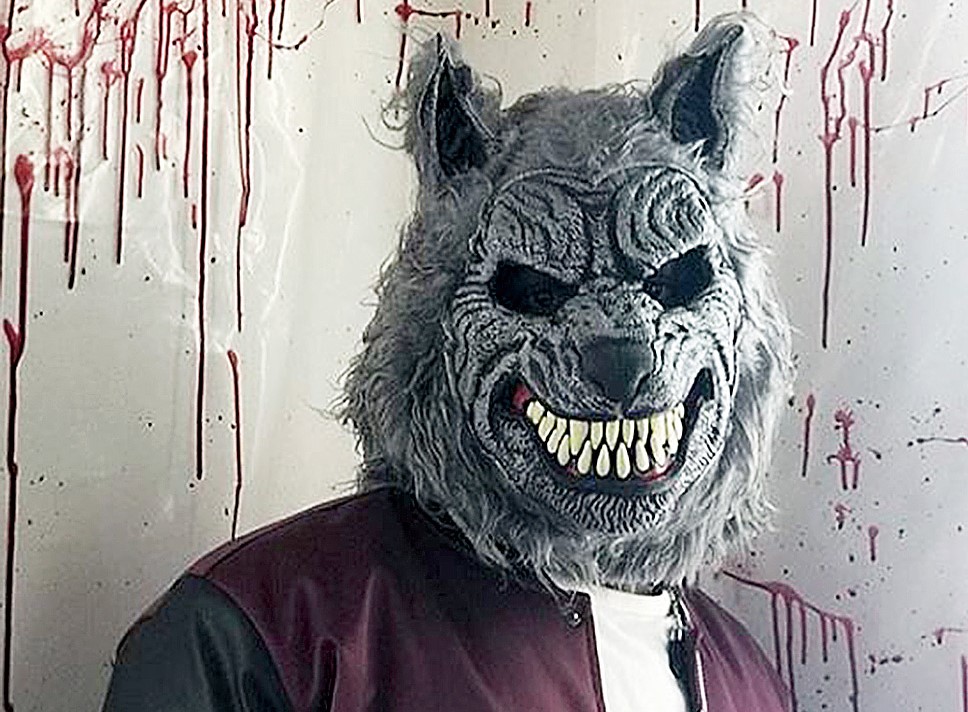 'Harry Potter: A History of Magic' has just arrived from the British Library — where it managed to achieve the milestone of being its most successful exhibition ever — in New York. The exhibition will be on display at the New-York Historical Society, and chronicles the real-life magical items and folklore that inspired J.K. Rowling while she wrote the Harry Potter series. The rare manuscripts, books and magical objects were drawn from the collections of the British Library and New-York Historical Society as well as the archives of Scholastic and J.K. Rowling herself.

The show starts with a look into potions and alchemy. The first room displays the Ripley Scroll, depicting symbolic references to the philosopher’s stone. Next, museum-goers make their way through rooms dedicated to herbology, charms and astronomy, which all contain real-life magical items including a mandrake root, a 13th-century scroll containing the magical incantation, “abracadabra”, and a celestial globe dating back to 1699. Interactive sections include potion-making and an invisibility cloak. The exhibition also houses Rowling’s own notes and sketches from when she was working on all the books. The show will be on till January 27, 2019. It is, of course, another addition to the Harry Potter empire, but it also appeals to casual fans and history buffs. 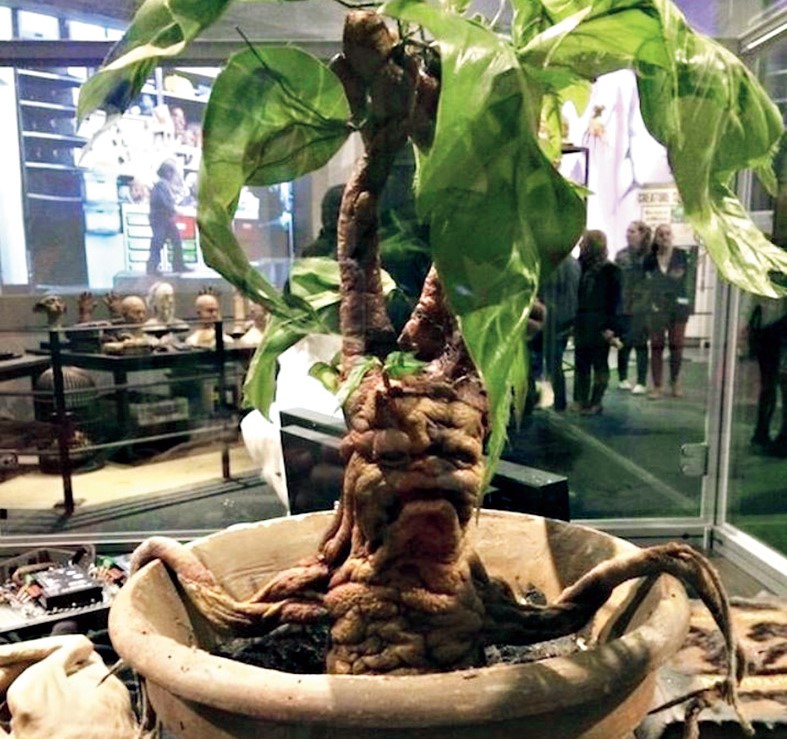 A mandrake root from the Warner Bros. Studio Tour London – The Making of Harry Potter
https://www.wbstudiotour.co.uk/

The Dream Machine pop-up in NYC has transformed into the Nightmare Machine for Halloween. Having just kicked off last week, this interactive pop-up has nine rooms filled with aliens, UFOs and anything that will give you the creeps. The founder, Paige Solomon, said, “Our goal with Nightmare Machine is to tap into our weirdest nighttime dreamscapes and create a creepy, fun, and content focused experience that will transport you into an alternate world.”