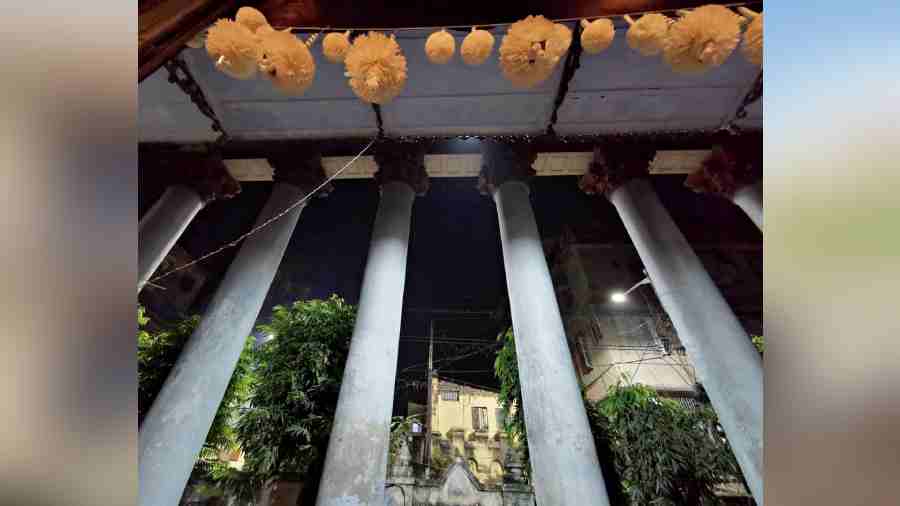 An interesting sounding evening programme finds me and my companions heading towards North Calcutta in the traffic. Instead of taking us through Central Avenue, the map suggests a route via Red Road and Strand Road, past Howrah Bridge and into Jorabagan. On the way, I find myself, once again, marveling at how this supposedly familiar city shrinks and expands in unexpected ways, depending on where you’re going and at what time. To my surprise, Red Road is completely empty at rush hour, a strange kind of vacuum surrounded by the tangle and jangle of heavy traffic on all the roads around it. Maybe it’s been like this for some time now; it’s just that I don’t usually head north at this time of day. Passing the entry ramps to Howrah Bridge, I start thinking about how you get trapped in certain orbits of a large city and don’t see other parts of it for years. I’d been to Howrah Station and Jorasanko often enough but I realised I hadn’t been past the bridge on the road north towards Nimtala possibly for over two decades. Through the early winter dark, I notice the old colonial riverside buildings as if for the first time, the neglected masonry closer to its crumbling demise than ever before, the pawmarks of real estate developers and corrupt officials almost glowing fluorescently on the walls of teetering brick.

We turn right, away from the river and into the glorious evening mess of Jorabagan and Pathuriaghata. We are looking for an old rajbari where the programme is supposed to take place. Inching along the narrow lanes, we stop the car at many decrepit or fortified gates. ‘No, this is the Mallick Bari.’ ‘This is the Ghosh Bari, you need to carry on down this lane and turn left.’ Eventually, we find the right pile. ‘Yes, yes, this is the Tagore Bari. Please come!’ Inside, in the courtyard of the mansion, chairs are arranged in rows facing a low stage. There is to be a discussion about this house, the different branches of the Tagore family, and the whole 19th-century tradition of rajbaris that supported the arts and brought about the Bengal Renaissance. Following this is a short tour of some of the rooms in the building, the evening concluding with a sarod recital by the owner, who is a trained musician.

After we sit down, this initiative by a major gallery — the city as a museum — is introduced fully: the idea of the annual festival is to explore the city and its cultural traditions without keeping things confined to the indoor spaces of museums and art galleries, and to see how the different arts flourished in the accompaniment of each other. The talk is indeed interesting: clarifying many things about the city’s early history, about the trajectory of the great North Calcutta houses in the 18th and the 19th centuries, and about how the connoisseur zamindar-entrepreneur patriarchs hungrily connected to the rest of the world, inviting new ideas and imbibing different cultures. Interacting with these men, besides the English were the French, the Dutch, the Portuguese, the Armenians, not to mention every kind of Indian who had made their way to the newly booming capital of the raj. Listening to the exchange, the uniquely cosmopolitan nature of early Calcutta is made vivid. Thinking about it, you realise, once again, that if the toiling labourers were initially local, they were soon joined by workers from Bihar, what is now Uttar Pradesh, and many other places; if the Marwaris and, later, the Gujaratis, Sikhs, Sindhis and others came to start businesses, and if they ruthlessly exploited the underclass, they were also treading and expanding the paths laid down by the British and the Bengali comprador-aristos.

During the short tour of the grand rooms and the thakurdalan, we see traces and relics of unimaginable luxury, of grandeur and grandiosity dancing in close partnership. Stepping out into the street for a cigarette, I hear unmistakable Kalkatiya-Hindi mixing with Bangla. A man lectures two others in a mix of the two languages, telling them how but for the lone and valiant efforts of Shyama Prasad Mookerjee all of West Bengal would have gone to East Pakistan. I resist the temptation to jump in and add some complications of historical truth to this over-simplified tale. Back inside, there is a tea break with the most delicious, flaky shingaras, the ones that can only emerge from this, one of the most fantastic culinary agglomerations in the world.

While leaving, my companions and I look for Tagore Castle, which is on the opposite side of the lane. A young man who has also been at the programme comes forward helpfully and points out the building through a gate. It takes a moment to perceive the dark mass of older architecture and the clocktower above the brightly lit concrete blocks. The young man sees our confusion. “Eita shob notun construction... eikhane shob obangalira dhukey occupy korey niyechhe.” (This is all new construction... all these non-Bengalis have got in here and occupied the place.) My companions and I look at one another; we are in our sixties, all born, brought up and living in Calcutta, and all three as obangali as they come. We warmly thank the young man — in Bangla, of course — and the guy goes off none the wiser.

On the one hand, the sangh parivar’s ‘vision’ and intention for Calcutta are clearly a brutal homogenisation into the Hindutva template at the direct cost of indigenous Bengali culture. On the other hand, it comes as a bit of a shock to see the casual prejudice of our momentary guide and the ease with which he uses obangali (non-Bengali) in its full derogatory sense — as though people who weren’t Bengali didn’t belong here, as though illegal squatting in empty buildings was something done only by non-Bengalis. As we witness the inexorable trashing of a deeply tainted but immensely rich cosmopolitan past, we need to be aware that no xenophobia, whether sub-national or local, bodes well for the future of the city.