The coalition is a waste of time and resources, and (given nuclear weapons with many triggers) an unnecessary risk 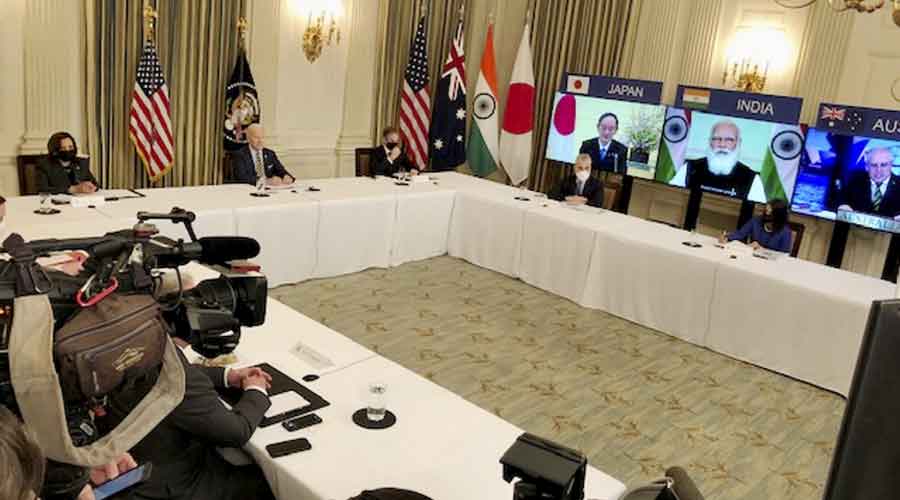 It has been quite pleasant living on a planet where most of the great powers were not locked up into two hostile nuclear-armed alliances, but nothing lasts forever. Creeping shyly onto the stage via Zoom, the successor to Nato emerged into public view this month. It’s called the Quadrilateral Security Dialogue — the ‘Quad’, for short. It’s intended to be to China what Nato was to the old Soviet Union: an alliance to deter and contain the ‘evil regime’, now located in Beijing.

The core four in the Quad are countries that have all fought China in the past: the United States of America and Australia (in the Korean War), Japan (before and during the Second World War), and India (sporadic border wars).

Most of the ‘usual suspects’ (the other Nato members) also want to join the team as players, or at least as substitutes: a Canadian warship sailed through the Taiwan Strait earlier, and Britain, France, Germany and the Netherlands will all deploy warships to the Indo-Pacific region later in the year.

Is ‘Nato in Asia’ really getting ready for another decades-long cold war and/or a possible hot war? Every nuclear weapons power except Israel and perhaps Russia would be part of this confrontation, and there are many more potential flash-points in the Asia-Pacific region than there ever were in Europe.

There is absolutely no evidence that China plans to invade anywhere (except Taiwan, which all members of the Quad acknowledge is technically part of China). In fact, apart from minor border clashes, no Chinese regime, Communist or otherwise, has invaded anywhere at all for centuries. So why worry?

There’s something older and deeper at work here. It’s the age-old ‘balance of power’ strategy that appeared among the Sumerian city-states in about 2500 BC, and has dominated international politics for most of the time since. All the major powers in a given region (Mesopotamia 3,500 years ago), or continent (Europe 350 years ago) or even the entire world (Nato versus the Soviet Union 35 years ago) see every other big power as a potential enemy. And history teaches that today’s friend can be tomorrow’s enemy, so you must always be stronger.

In particular, countries worry about an emerging great power that might get big enough to upset the whole apple cart — Spain in the 17th century, France in the 18th, Britain in the 19th, Germany in the early 20th century, Russia in the later 20th — and make alliances against it.

These arrangements have usually ended in great wars, but recently not so much: 40 years of Cold War against the Soviet Union ended without a ‘world war’. Now China’s growing strength is great enough to set the wheel in motion again, and its behaviour would have to be utterly saintly to stop the others from ganging up on it in the time-honoured way.

There are aspects of the Chinese Communist regime that are indeed ‘evil’: its behaviour towards ethnic minorities in Xinjiang and Tibet, for example, and indeed towards dissenters among its own Chinese people. Treaty-breaking in Hong Kong and building military bases on disputed islands in the South China Sea in defiance of international law are hardly ‘confidence-building measures’ either.

But there is no need for this Quad alliance. It’s as implausible to believe that China would invade some country beyond its borders now (except Taiwan, of course) as it was to think that the Soviet Union would ever have seriously considered invading West Germany. The Quad is a waste of time and resources, and (given nuclear weapons with many triggers) an unnecessary risk.

One staircase thought, however. Are Joe Biden’s advisers cunning enough to realize (a) that China under current management will eventually invade Taiwan and is bound to win; (b) that it would be suicidally dangerous for the US to intervene; and (c) that all America’s current and prospective allies think the same? In which case their real aim might be to spread the blame: they’d rather be just one of the Quad crowd that abandons Taiwan than bearing the blame alone.

But I suspect they’re not that clever.