Naveen Patnaik strikes gold with his love for hockey 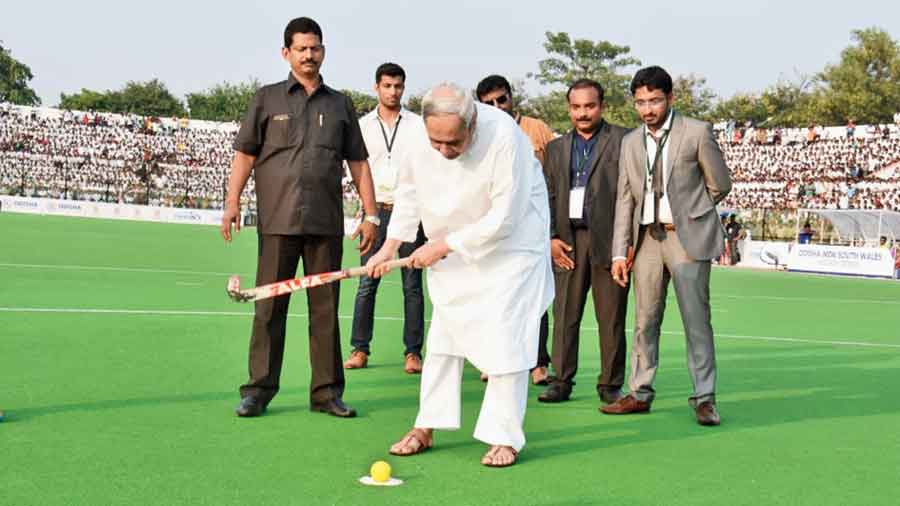 Hockey seems to have regained at least some of its lost glory in India with the spectacular performances of the men’s and women’s teams at the Tokyo Olympics. Hockey lovers across the country are singing paeans to the Odisha chief minister, Naveen Patnaik, for having given India’s national game a new lease of life by sponsoring both teams at a critical juncture in 2018 when Sahara decided to withdraw its sponsorship. Patnaik, who used to be the goalkeeper of his school hockey team, came to the rescue of the game immediately by signing a five-year deal said to be worth over Rs 100 crore. For a cash-strapped state like Odisha, this was a big sacrifice to make but Patnaik had no hesitation making the decision as the future of hockey was in jeopardy. Odisha, thus, became the first state of the country to officially sponsor the two teams. As the men’s team clinched bronze at Tokyo, ending a 41-year medal drought at the Olympics, the team was as much in focus as the CM of Odisha with social media being flooded with praises for Patnaik. Even the Opposition leaders have been forced to admit Patnaik’s contribution to the game. The CM, thus, seems to have killed two birds with one stone. While he has successfully restored hockey’s lost glory in India, he has also made himself politically unassailable with his popularity at an all-time high.

The euphoria about Priyanka Gandhi Vadra transforming the Congress in Uttar Pradesh has finally disappeared and there is a strong yearning for an alliance for the upcoming assembly elections. While Congress leaders had dreamt of a dramatic revival, even talking of forming the government with Priyanka being projected as the CM candidate, their dreams have now been punctured. Many leaders privately concede that the situation is not good even though an organizational machinery has been put in place across the state. While critics and dissenters predict doom, even those supposed to be playing an important role in the Priyanka regime admit that Covid-19 derailed revival efforts and the party is not in a position to win in most constituencies in spite of having gained in strength.

The Congress hopes an alliance with the Samajwadi Party will be beneficial for both and the Bharatiya Janata Party can then easily be kicked out of power. Even Priyanka does not rule out the possibility of an alliance. The SP leader, Akhilesh Yadav, has expressed willingness to tie up with smaller parties, particularly the Rashtriya Lok Dal of Jayant Chaudhary, but avoided mentioning the Congress. He has even talked of winning 400 out of the 403 seats, demonstrating confidence of a comeback. The Congress can hope the collective pressure of all Opposition parties will compel Yadav to go for an alliance. The show of unity during the ongoing parliamentary session is bound to bring all the parties under pressure to form a coalition.

Floods are ravaging large swathes of Bihar this year too, but there is a difference. The state government is not sharing data related to flood-affected areas, population, and relief works. Once or twice a month some half-baked figures are released, which do not give a clear picture of the devastation brought by the deluge. Asked about this change, a senior official shared that “some vested interests don’t want to put the data in the public domain because it may lead to questions on relief works. There is another possibility that the state coffers are empty and the government has decided to downplay everything.” Incidentally, the CM, Nitish Kumar, is yet to announce elaborate relief measures and compensation for flood victims this year.

But Kumar is busy handling the pandemic. He wanted to see firsthand how well the people in Patna, Vaishali and a few other districts were following Covid-19 protocols. He set out with his entourage and saw no crowds, clean streets, and a thin presence of people, many of whom were masked. He returned satisfied and lifted most of the restrictions imposed. Unnerved by this development, the intelligentsia probed into what had happened and found out that whenever Kumar wants to inspect anything, all the officers concerned are duly informed about his impending visit. They smoothen and refurbish everything to the satisfaction of the CM. It happens with all welfare and development schemes too. Ignorance is bliss?

A recent function to mark the change of guard in the Assam Pradesh Congress Committee left party members with mixed emotions. While they were happy that a new team under Bhupen Kumar Borah was finally taking charge, the former state unit president and sitting Rajya Sabha MP, Ripun Bora, left most people zapped when he spoke about the intense power struggle to oust him. He wished his successor would be able to concentrate on checking the BJP effectively instead of protecting his chair like he did for most of his tenure. Most felt this was unwarranted; leaving many hurt and embarrassed. Bora’s remark was lapped up by the media, leaving most wondering whether the rise of the BJP is responsible for the Congress’s fall or if it is the latter’s self-destructive streak.

The socialist moorings of the Karnataka CM, Basavaraj Bommai, has not gone down well with his hard-core Hindutvavadi party colleagues. Son of the former CM, SR Bommai, of Janata Party, Bommai Jr was part of the Janata ‘parivar’ before joining the BJP in 2008. But the “socialist” label has stuck. If the “socialist” foundation of Bommai Jr is already an issue, the BJP government is in for some turbulence in the coming months.