The grapes of wrath 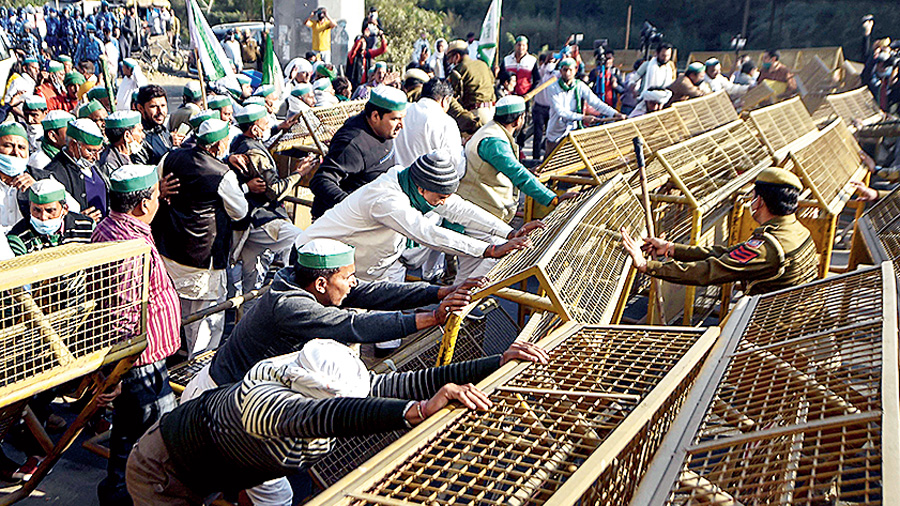 The farmers’ protest near New Delhi is a major political event challenging the Narendra Modi government. The participation is widespread and it is growing by the day. That farmers have been unhappy with their economic condition was evident from the number of marches to Delhi during the past two years. This time the protest is about three bills passed in Parliament in September 2020. Before coming to the reasons why the farmers are protesting, it is important to mention two facts surrounding these bills and the ensuing protests that form the political backdrop. The first is that these bills were virtually bulldozed in the Rajya Sabha, passed by voice vote despite a demand for a division. This is against the rules. Those members who protested were suspended. The second is the way in which the government reacted to the farmers’ march to Delhi. The farmers were met with lathis, tear gas and water cannons; they were dubbed ‘anti-nationals’, ‘Khalistanis’, agents of Opposition parties and middlemen who were not ‘real’ farmers. A large part of the media either did not highlight the event, or added even more demeaning and false epithets to those articulated by the ministers of the Central government and the leaders of the Bharatiya Janata Party. Both these incidents represent the most recent instances of the Centre riding roughshod over democratic institutions and practices. But unlike what was done with the Rajya Sabha members, ‘suspending’ protesting farmers is not an option that the government has.

The farmers’ anxieties emerge from the three bills that were passed: the Farmers’ Produce Trade and Commerce (Promotion and Facilitation) Act, 2020, the Farmers (Empowerment and Protection) Agreement on Price Assurance and Farm Services Act, 2020, and the Essential Commodities (Amendment) Act, 2020. Certain provisions made in these legislations have led the farmers to believe that their incomes will come under greater uncertainty and, ultimately, get reduced. What are the factors that the farmers are basing their perceptions on?

Since 1965, the Agricultural Produce Market Committee Act enabled the setting up of regulated mandis or markets that allowed farmers to sell their produce to private agents and traders for a mandi tax or fee. If there was any residual produce left unsold, the government bought it at a pre-announced minimum support price. The regulated mandis were of particular importance in the Green Revolution belt of Haryana, Punjab and western Uttar Pradesh. Not that the system was faultless. The agents became powerful and formed cartels and even harassed farmers. Farmers were always allowed to sell outside the mandis, but they would not be entitled to the MSP if they ended up with unsold stocks that they could not store. The mandis were a kind of insurance for the farmers. Only a small fraction of farmers were able to avail of the MSP: somewhere around 6 per cent. The remaining 94 per cent still depend entirely on markets.

The first law envisions the creation of ‘one nation, one market’ for agricultural trade. To induce this transition, the legislation has given a tax holiday for trade outside the mandi, while the mandi tax remains. This, it is hoped, will gradually shift all trade outside the mandis and the mandis would become redundant. E-trading will become more common and give access to market data from all over India. An important implication of all this is that the MSP will become a thing of the past. The farmers believe that with the MSP gone, large traders and agri-businesses will dominate the open market and drive down prices for the farmers. These large players would be much more powerful and have deeper pockets compared to the agents of the APMCs. There will be no benefit for the farmer.

The National Democratic Alliance government had promised to make the MSP more efficient, computed on considerations suggested by the Swaminathan Committee report published over 10 years ago. In fact, the MSP was a part of the NDA’s election manifesto. This sudden turnaround is now upsetting the farmers. The government is claiming that MSP will stay, but it is refusing to put the pledge down in writing. Indeed, if anything is the need of the hour in a crisis-ridden agriculture, it is a universal MSP covering all farmers. This eclipse of the APMCs also takes away a source of revenue for state governments without their consent, representing an attack on the federal structure of the republic.

The second legislation allows contracts that farmers may enter into with agents, traders, businesses and multinational firms for producing an agreed crop at a pre-agreed price. The government expects that the farmers will have access to better technology and assured prices, leading to higher profitability and lower uncertainty. The language of the Act, however, allows for written as well as oral contracts. Section 19 of this Act puts any dispute arising from the bilateral contract out of the jurisdiction of civil courts. Now consider small farmers facing big buyers with oral contracts that cannot be enforced in a civil court. The prices, in such a situation, can surely be manipulated post-harvest. Also, if the inputs are given to the farmer and the crop chosen by the buyer, the cropping pattern will change towards commercial crops or towards export crops required only by multinationals. The seeds may be GMOs with increased vulnerability for crop failure like in the case of cotton. If that occurs, who pays the farmer? Will a buyer compensate the farmer if there is a crop failure? Or will the other creditors from whom the farmer might have bought his inputs spare him the debt? Indeed, this has been tried in advanced economies too, like France, the United States of America and the United Kingdom. The model has failed, and has been the reason behind a number of suicides by farmers. The same holds true for India. What remains a greater worry for the farmers is that in the game of competition amongst buyers, just a handful of giants will win. The monopolization of trade cannot be ruled out with a couple of big houses in India and maybe three or four multinationals cornering the overwhelming share of agricultural trade.

At this point, one might raise a question: what prevented big business from cornering markets until now? The answer lies in the amendment to the Essential Commodities Act, which was the third bill passed in September. This amendment deletes cereals, oilseeds, pulses, potatoes and onions from the list of essential commodities, except in the time of war. In rendering the commodities inessential at the stroke of a pen, it makes their hoarding completely legal. Who benefits, once again? Big traders can now easily influence consumer prices keeping them as high as possible and manipulating farm gate prices by delaying buying till the farmers become desperate to sell at any price. The farmers were not covered under the Essential Commodities Act. They were allowed to keep as much stock as they wanted to of their own produce. However, the ability to do so is extremely limited for almost all farmers in India because of the lack of infrastructure.

India certainly needs more incomes for its farmers. As per the last data available for farm incomes in India, according to the NSSO report of 2013, the average monthly income of an entire farm household with five individuals in the family from all sources was a mere Rs 6,426. Bringing the model of corporate control over agriculture is not going to be a solution. It will only aggravate the problems of uncertainty and debt, land use patterns and soil fertility, and availability of freshwater. In the US, where this model has been tried for decades, data suggest that since 1960 there has been a steady decline in farm incomes. The survival of farmers depends heavily on government subsidies. In India, the situation is much more forbidding. Unless the government sits down to consider the demands of the farmers, the anger will only continue to escalate while the ‘grapes of wrath get heavy’.