Even after (or if) the current crisis in Myanmar is resolved, it is quite obvious that the country will need to exorcise its military of its political genes 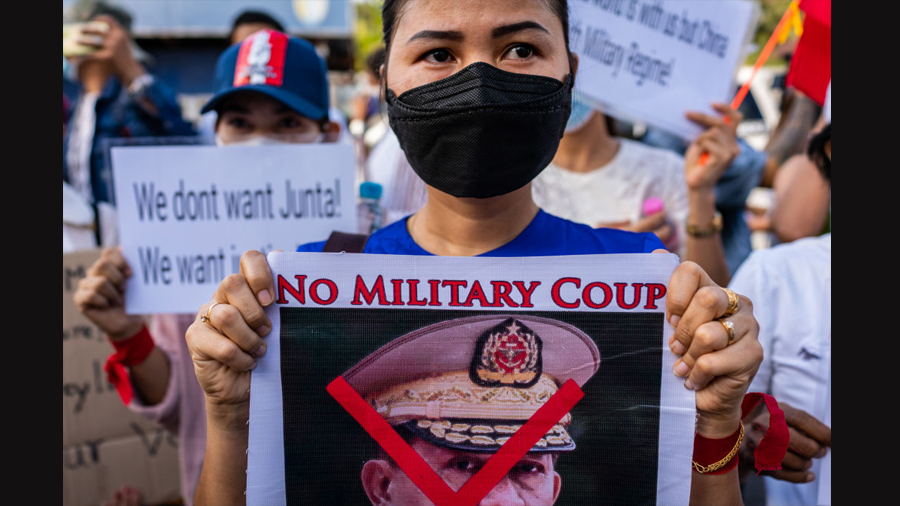 Protesters hold banners against the military coup and in favor of democracy outside the Russian embassy on February 12, 2021 in Yangon, Myanmar.
Hkun Lat/Getty Images
Pradip Phanjoubam   |   Published 25.05.21, 01:04 AM

Much has been said about the brutal military coup in Myanmar. But one question remains inadequately addressed. Why is Myanmar so prone to military coups? Indeed, it has been under military rule for most of the country’s postcolonial years since Independence in 1948. Beyond the popular explanation of power hungry military leaders, could it also have something to do with the false sense of the military being the guardian of the political establishment, an inherited DNA from the military’s roots as freedom-fighting activists? Can an army with such a history be purely professional fighters driven by the motto, “Theirs not to reason why, Theirs but to do and die”? A hypothetical scenario should illustrate this point. If, in 1947, it was the Indian National Army that liberated India, would the Indian army with the INA’s genes in it have been the same?

The war diary of Field Marshal Viscount William Slim, Defeat Into Victory, which became an important book on the history of the Second World War in the Burma theatre, has some interesting clues buried deep inside its 540 pages, describing how he twice met General Aung San, father of Aung San Suu Kyi and leader of Myanmar’s freedom struggle as well as founder of a militiamen army that first called itself Burma Defence Army and, later, the Burma National Army, to negotiate terms for the latter switching sides to the British after some years of fighting alongside the Japanese and the INA. This was in May 1945 after Slim managed to turn the tables against what had seemed like an unstoppable push towards India by the Japanese, and the Japanese were then the losing side. Whether this was opportunism or whether Aung San developed irreconcilable differences with the Japanese is another question. Slim took the step after much discussion on the British side, with many being of the opinion that this would be pointless militarily and that the group’s Burmese nationalism would be a headache for the British after the war. The  Supreme Allied Commander in the Pacific theatre, Lord Mountbatten, however, favoured Slim’s proposal. Therefore, the meeting.

Slim met Aung San at the British headquarters at Meiktila. In the first meeting on May 15, Slim said he was impressed with Aung San’s commitment, honesty and intelligence, but also realized how broken the BNA was at the time. He also learnt from Aung San that the resistance movement was headed by a provisional government formed by his Anti-Fascist People’s Freedom League. During the initial meeting, Aung San wanted the provisional government to be taken in as an ally, with himself as an Allied Commander. Slim refused and made it clear that if the BNA wanted to side with the British, it will have to come under British command and that the BNA will not be taken in as a separate unit and absorbed into the Burma Rifles of the British. In the second and final meeting on May 30, Aung San conceded to Slim’s terms but insisted on two of his important conditions — his troops be paid and rationed by the British, and that if major orders were to be given to the BNA soldiers, the resistance leaders be consulted. Slim agreed to these.

At the time of Burmese independence, it was Aung San’s provisional government that inherited the British administration. Quite understandably, such a government would carry plenty of the DNA of its past avatar as a resistance movement under the AFPFL with no clear separation between military and political responsibilities. The writer and Burma watcher, Bertil Lintner, has also observed in an article that the Myanmar army presumes “the dwifungsi, or dual function, doctrine of the Indonesian army that stated that the military has both a defence and social-political role.” This transition of power in Burma to the AFPFL also somewhat alienated the ethnic minorities whose loyalty to the British while they were rulers were much longer and steadfast. From this vantage point, Myanmar’s current problem can be seen as a consequence of the nation’s inability to, first, purge its defence forces of the political DNA inherited from the days they were freedom fighters and, second, the failure to work out a comprehensive federal political structure to satisfactorily and equitably share power among its many nationalities.

Even after (or if) the current crisis in Myanmar is resolved, it is quite obvious that the country will need to exorcise its military of its political genes to work out a comprehensive federal political structure. If not, it is likely that even if democracy were to return, the spectre of a military coup can materialize anytime in the future. It may be of interest to note here that there are other nations that won militia-led freedom and have had to tackle similar challenges. Indeed, the contentious Second Amendment of the US may be the country’s own way of sublimating, not quite completely though, a similar issue.