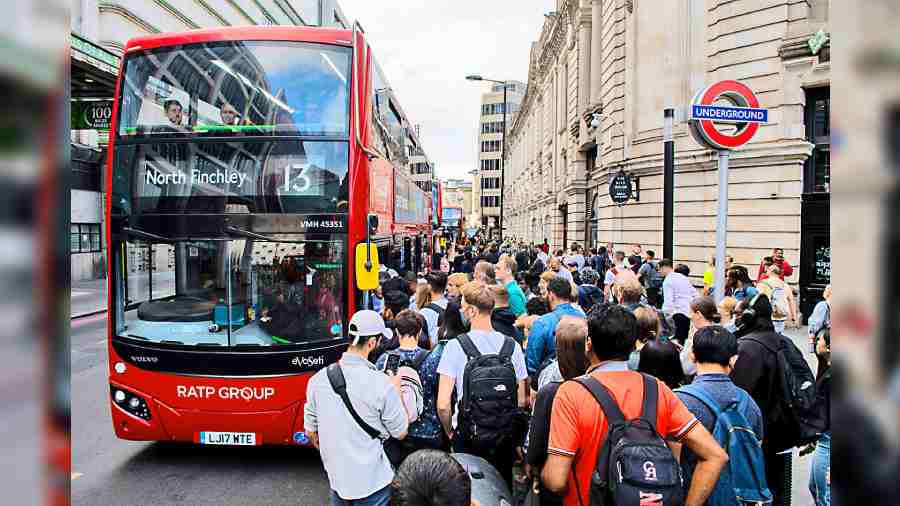 F or the shabby-genteel desi tourist, committed to negotiating the world on the cheap, London’s buses are a municipal miracle, a symbol of the Otherness of the first world. It isn’t London’s parks, theatres, galleries or even its built heritage that make the city exceptional: it is its bus service. London’s buses allow tourists and residents alike to own the city in a way that’s impossible elsewhere.

As a graduate student in England in the early 1980s, travelling about London as a visitor meant using the Underground. This wasn’t because buses weren’t available; it was just that you needed to learn their routes whereas the Underground, with its schematic maps and graphically signposted lines and routes, was a foolproof way of getting around the city. But thanks to smartphones and the magic of apps that map bus routes (or bus and tube routes) for you, London’s bus service becomes instantly accessible to the most clueless tourist.

As a recently retired sixty-fiveyear-old, I noticed with interest that residents of the city’s boroughs who are over sixty can ride London’s buses and trains for free as can children under eleven. Unlike the Underground where fares depend on the distance travelled, London’s buses deduct a flat fare from your Oystercard or contactless card or phone app, so riding buses is relatively cheap. They are also physically accessible in a way that veterans and victims of Delhi’s buses can only dream of. A woman in a wheelchair pushed a button on the side of the bus whereupon a ramp whirred out and she drove over it into the bus. The commitment to accessibility shapes the inside of the bus. There are designated spaces where parents with young children can anchor their strollers, where older people with shopping carts or travellers with luggage can stow their things without getting in the way of others.

There’s a bus stop in South Kensington which feels like something out of science fiction. It has a high-resolution interactive screen, which commuters can use to access weather reports, the BBC’s news headlines, maps and detailed information about both bus routes and Underground lines. One night, returning from a play, we had surfaced from the Piccadilly line and were waiting for a bus home at this stop. A very drunk young man swayed up, sat on the streamlined bench, plugged his phone into a USB charging port built into the frame of the bus shelter, then safe in the knowledge that his phone wouldn’t die launched himself into a loud conversation with some very tolerant friend.

It isn’t just the hardware that distinguishes their buses from ours, it is also the determination to make information available to strangers. The approaching stop’s name will both appear on a screen and be announced over the bus’s speakers. The anxiety about whether the bus will actually stop is alleviated by an accessible red button that passengers can push to let the driver know that they mean to get off. None of this would mean much if drivers decided to skip a stop as sometimes happens in Delhi, but in the two weeks that I’ve been here, this hasn’t happened once.

While London’s transport system performs the necessary function of bringing commuters into work and then reaching them home again, that isn’t its principal purpose. Delhi’s Metro is basically a commuter system. Its lines are like spokes on a wheel, bringing people into the city to work from its suburbs, exurbs and satellite towns. The Metro is a remarkable infrastructural achievement that has improved the city immeasurably but it has two large defects. One, it’s too expensive for the urban poor of the city so they don’t ride it. A mass rapid transit system that filters out the masses is doing something wrong. Two, because it is a commuter railway, it doesn’t really cater to travel within the city in the way that Transport for London with its hybrid network of buses and trains does.

Travelling in London, I’ve never once walked more than ten or twelve minutes to take a train or a bus and I have never had to walk more than ten minutes from an Underground station or bus stop to my eventual destination. I’ve never waited for a bus or a train for more than ten minutes. I’ve been to people’s homes, to the theatre, to parks, to eating places and bookshops, confident that I wouldn’t have to tire myself out walking or just waiting for something to show up. There are few sights more comforting for the night time traveller than the spectacle of a half a dozen double-decker buses rolling up to a bus stop all at once.

One of the defects of the Delhi Metro, which prevents it from displacing private car traffic as much as it should, is the problem of the last mile. Unless you’re lucky, the Metro station is likely to be too far to walk to and, more often than not, there won’t be a bus to take you to or from the station. This last mile problem is rare in London. Bus stops are so precisely mapped onto the grid of Underground stations that moving from one to the other involves very little walking.

But the frequency of trains and buses and the connectedness of bus stops and Underground stations count for little if the pedestrian trying to make the connections can’t safely cross the road. In Delhi, zebra crossings are invitations to die because no bus, car or motorcycle will give the pedestrian right of way. The occasional zebra crossing enforced by a red light sometimes persuades conscientious drivers to stop but the pedestrian can’t assume that they will.

I found London’s pelican crossings weirdly empowering: you push a button and wait for the traffic to stop, certain that it will. Even more wonderful are the zebra crossings, the ones with yellow lights at either end, where you have to just step on to the stripes for traffic to stop. The best zebra crossings are the ones that straddle a twoway street: you feel like Moses parting the Red Sea. Delhi’s massively wide roads are increasingly impossible to cross unless you’re young, athletic and unafraid of death. So changing buses or transiting from a Metro train to a bus isn’t just tiring, it’s positively dangerous.

A city like London is useful because it shows us what’s possible. We don’t need fancy bus stops with high-res screens and there are things about London’s transport system that would be positively bad for Delhi, like the decision to not accept cash for tickets. What we can learn from London is the lesson that a city’s main customer ought to be the pedestrian who takes public transport, not private motorists or Uber drivers who crowd our roads without transporting citizens efficiently or affordably. London’s red double-decker buses are iconic not just because they are striking but because they make a properly metropolitan life possible.