The Thin Edge: Bombay bids farewell to the Fiat taxi 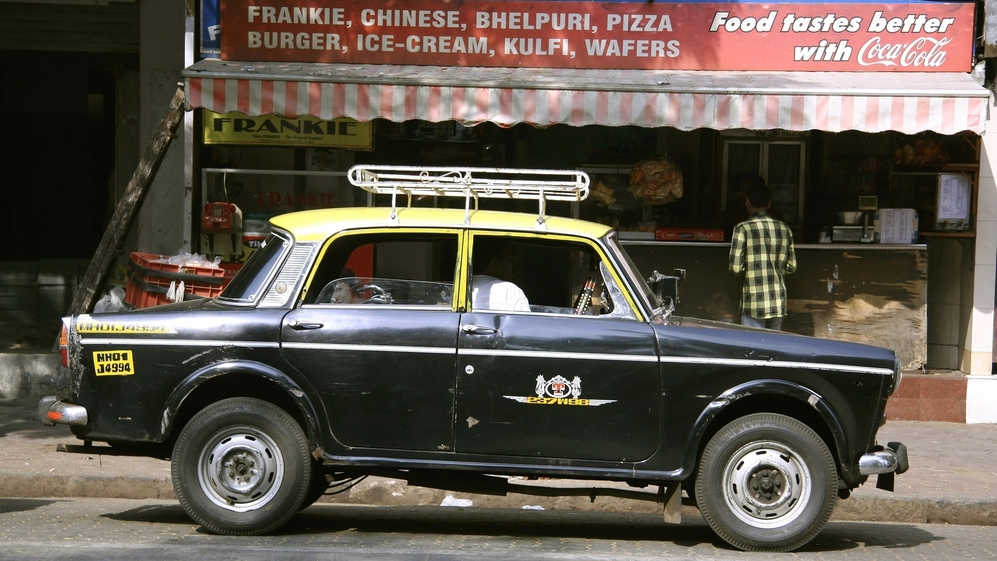 Travelling to Bombay as a child, the train pulling into the vaulted Victoria Terminus was pretty similar to pulling into Howrah Station; as in Calcutta, the porters were Bihari or from Uttar Pradesh, their hustle, bustle and bargaining the same, the bookstalls and food kiosks in the station were also familiar. One of the first markers that one had arrived in a very different city was when we climbed into the Fiat taxi that would take us from VT to my aunt’s place near Kemp's Corner. Unlike Calcutta, the taxi rank was organized and no-nonsense, without any of our eastern city’s sense of chaos: you had to move quickly to stuff your luggage into the vehicle and get going; no one was honking from behind but you could feel the tension in the porters and the taxi driver. As opposed to Calcutta’s kaali-peeli Ambassador taxis, these yellow-black Fiats had no ample space welcoming you; you and your luggage were efficiently stuffed into every nook and cranny of the little car, the doors shutting on you giving off a very different sound, a kind of exact but tinny rattle, which was very different from the Amby doors’ heavy thunk of ancient metal locking into place. The speed with which the little creature ejected itself from the taxi rank and hurtled into traffic was also in marked contrast to the lugubrious, first-gear waddling of an Ambassador as it decided whether to become fully un-stationary.

Within minutes, we’d be on Marine Drive. Whizzing by on our left would be the brown-green-blue sea and beyond it the whole planet. Flashing by on our right would be art deco apartments that cost an astronomical arm and a leg. In a speeding Ambassador, you were thrown about a bit, loose goods in the hold of a large ship; in a Bombay Fiat you were part of a tightly packed rocket heading arrow straight. Traffic lights in Bombay would bring the rocket to a sharp stop, very different from the Calcutta taxi meandering to an incontinent pause. On the rare occasion a Bombay policeman stopped a taxi for a traffic violation, there was no debate or discussion between cop and driver; there was no possibility of any bargaining or bribing — the challan was delivered, the driver drove on. It wasn’t that there was no overtaking; after all, Bombay, at its core, was about aggressive overtaking, but it had to be done within a set of strictly followed rules. Released from the red light or a funny-looking ‘Mama’ in blue shorts and white shirt, the driver would surge ahead in a burst of whining speed, the nasal horn emitting its alien beep, and the sea air with its fishy sting would again be in our noses and hair. Reaching the destination, the luggage would be unloaded by the driver with an urgency unchanged from the taxi rank, the metered money taken without fuss, and then he would be off, back onto the streets where time was as jealously husbanded as gold.

At some point in the early 70s, the shape and smell of the Fiat taxis changed, but not the economical efficiency of each ride and transaction. Unlike Calcutta, there was never any khit-pitt about fares or destination — the Fiat (now branded Padmini, a name which no one adopted), in its kaali-peeli livery, would go where you asked it to go and the fare was strictly according to the meter and whatever the taxiwalla’s official fare-chart threw up. For a Calcuttan, the speed and the efficiency of a taxi ride in Bombay remained mind-boggling. For a Kolkataiya in his late teens or early twenties, equally startling was the fact that you could do many things in the back seat with another mutually desirous person and, forget taking his eyes off the road, the driver wouldn’t even blink — he wasn’t concerned about peeping at your amorousness — he was only interested in making his fare.

As a child, I was both thrilled and daunted by the Bombay taxis. As I grew up and spent time in Bombay as a young working adult, I began to appreciate them as one of the services that best represented the peculiar egalitarianisms of a can-do city. As Calcutta fell (further) apart in the late 70s and 80s, so did our taxi services. The fiddled meters, the squabbling about where a driver would go or not go, the sheer dilapidation of the vehicles and their interiors, the dangerous rusted bits that could seriously damage you as you got in and out of a taxi — all of these signified a collapse of the basic idea of a city. Bombay, on the other hand, continued to zoom straight ahead with shiny cosmopolitan speed.

I still remember the first time I saw a Bombay taxi-driver bribe a Bombay cop. It was in the late 80s and we were stopped near the High Court for leaving a red light early. The policeman leaned into the window and said something. The driver reached into the top pocket of his safari suit uniform. Hand curved to meet hand, and small currency was transferred from one pocket to another. In a couple of years, we would start witnessing the regression of a great metropolis into a narrow-minded, slit-eyed, suspicious frown of a small town. By 1990, thuggish young men were thumping around on their motorcycles, waving saffron flags with stencilled tiger faces, shouting about Ram temple and Marathi manoos. In a few years, their cynical overlord had won the elections and placed his minions and puppets in charge of Maharashtra and Bombay.

The Fiat-Padmini taxis still ran efficiently, their interiors now souped up with coloured lights and over-stuffed seats, their rear windshields proclaiming their home bases in the far-flung suburbs to filter passengers in the evening. However, the city that had throbbed for decades with a certain enviable cosmopolitan mix was now on its way to being shrink-wrapped in a toxic orange mindset. Across the nearly thirty years that have followed, a lot of things have happened. We in Calcutta have been dealing with our own thuggish young men carrying flags in all sorts of colours, even as our own taxis have been denuded and made almost defunct. Sections of our Republic have been hollowed out and put into the junkyard, whether permanently or temporarily remains to be seen. As the last of the Fiat-Padminis are decommissioned this year, Bombay is in yet a different place now, its inherent energy having sloughed off some of the toxic shrink-wrap but still very different from the city of possibilities it was in the 60s and 70s.