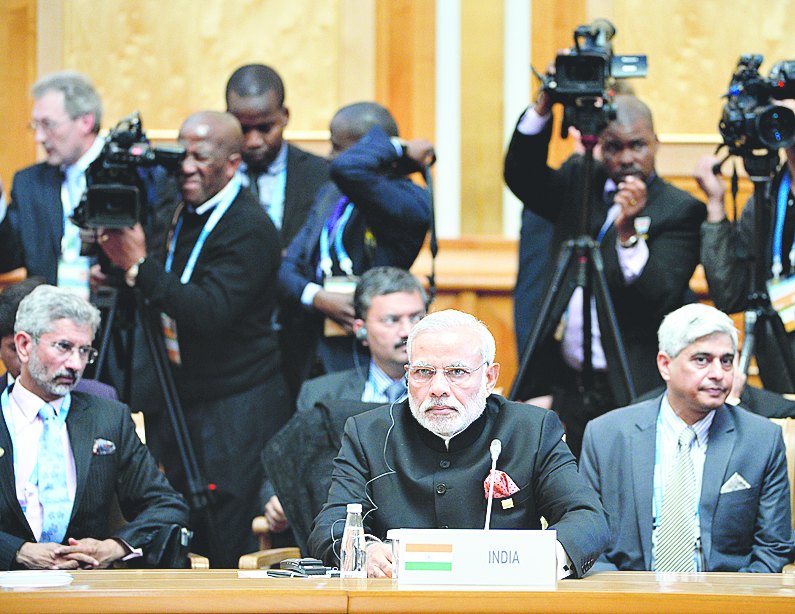 Whoever says that the Narendra Modi government is hostile to the media is talking through his hat. Barring I.K. Gujral, when he was prime minister, no previous government has been as free and forthcoming with information - certainly on matters of diplomacy - as Modi's set-up has been in the last one year and three months. The hopes that were raised when Modi and Pakistan's prime minister, Nawaz Sharif, decided to meet in Ufa last month would not have evaporated within 72 hours if the National Democratic Alliance leadership had clammed up on information. Indian journalists rarely had it as good as what they got in Ufa. Within literally minutes after the foreign secretaries of India and Pakistan read out their joint statement on the outcome of the Modi-Sharif meeting, a prominent television channel's correspondent present in Ufa was told by the Indian side that Kashmir did not figure in the summit meeting. For the record, it was not foreign secretary, S. Jaishankar, who briefed the TV correspondent on these lines.

Those present in Ufa who have experience of dealing with Islamabad immediately realized that this was the end - in substance, not form - of what Modi was trying to revive in terms of engaging Pakistan. Predictably, it brought forth a reciprocal response from Sharif's side. Once Sharif's delegation got back to Islamabad, his point man on all matters of foreign policy, Sartaj Aziz, comprehensively demolished the Indian version of the Ufa talks. "They [India and Pakistan] are prepared to discuss all outstanding issues," the post-summit joint statement had said. Aziz responded three days after Modi met Sharif: "We all know which are those outstanding issues. Kashmir of course tops the list of outstanding issues, but there are also other important issues like Siachen, Sir Creek, interference and water. Kashmiris have suffered for three generations now. Their right to self-determine their destiny has not been granted. Pakistan has stood by the Kashmiris in their legitimate struggle. Prime minister Nawaz Sharif affirmed our principled position in clear and unequivocal terms during his annual speech at the UN General Assembly. We would continue to extend political, moral, and diplomatic support to our Kashmiri brethren."

Like all governments, of course, the Modi government also spins news and views only on what shows it in a good light. The claim that Kashmir was not part of the Ufa outcome was an attempt on these lines to show the National Democratic Alliance government in a good light. The NDA can be accused of not telling the whole truth, but that is very different from alleging that its government keeps the media at bay. Since scepticism about Pakistan is at an all-time high in Indian public discourse, Aziz's factual rebuttal of Indian claims did not get much traction. But everyone who has dwelt on diplomacy with Islamabad knows that for the last 20 years at least, any reference, in any joint statement, to "all outstanding issues" includes Kashmir.

However, a more perilous outcome for New Delhi in Ufa, which has eluded popular perception, is an acceptance by Modi in his discussions with Sharif that "India and Pakistan have a collective responsibility to ensure peace and promote development". Accepting "collective responsibility" for peace, in this context, is actually repeating Sharm-el-Sheikh.

This marks a fundamental shift from the long-held Indian position that the threat to peace between India and Pakistan is Islamabad's unrelenting drive to promote cross-border terrorism. The United Progressive Alliance government broke with that position in Sharm-el-Sheikh when it agreed to include a reference to Balochistan in the joint statement then. Pakistan claimed it as an acknowledgement by Manmohan Singh that India was interfering in Pakistan's internal affairs. The UPA establishment quickly backtracked. Luckily for Modi, neither the Opposition nor the public at large in this country have caught on to the ugly reality that by agreeing in Ufa that India, too, has a responsibility to maintain peace, the present government has embraced Sharm-el-Sheikh all over again.

Aziz was blunt on this, too, when he returned home from Ufa: "There was a frank discussion on each other's concerns. Pakistan has been deeply concerned...about Indian interference in Pakistan, including continuing support for insurgency in Balochistan. India, on the other hand, has been repeating its traditional accusations of cross border terrorism while overlooking the decisive counter-terrorism campaign launched by Pakistan in the past two years."

On another subject of Indian spin in overdrive, the Mumbai terror trial, Aziz left no room for ambiguity: "We need more evidence and information to conclude the trial. The reference to 'additional information' is a recognition of the need that more information is needed (from India) to expedite the trial." Simultaneously, Sharif sought information on the progress of the Samjhauta Express trials. With these assertions by Aziz, the outcome of the proposed meeting of the two national security advisers soon is a foregone conclusion. With this government's craving to be seen in a positive light in the media - contrary to Modi's pretensions otherwise - the outcome may be eerily similar to those of the Gujral government's initiatives with Pakistan, especially a disastrous meeting between Gujral and Sharif in Male in May, 1997.

Professional courtesy demands that the TV correspondent who was told in Ufa that Kashmir did not figure in talks with Pakistan must not be identified. Therefore, the government functionary who put out this ill-advised and factually incorrect spin must also not be identified. Suffice it to say that this source is generally perceived to be one of the most powerful men in the capital today, someone who is said to enjoy the prime minister's maximum trust. What the TV correspondent suitably did was to file his story right away. Thereafter, he shared his information with other Indian journalists in Ufa. The jury is out on such a media strategy by Modi's men. It can only work if such a strategy is backed by credible policies that are strong in substance. Otherwise, 2015-16 will see a repeat of Male in 1997.

Politicians all over the world act differently from what they preach or profess to be doing. The best example of this from our time is George W. Bush in his first four years as president of the United States of America. Bush used to insist - and he convinced his people till his re-election for a second and final term in the White House - that he deferred solely to his beliefs and to what was right when it came to action. But all the time, he tailored his decisions guided by focus groups that were created to assess the public mood, and carefully lit social fires that consumed his opponents and ensured his re-election. It took nearly eight years for the American people to see through this Bush.

Modi wears on his sleeve his famous disdain for the media, which he has carefully cultivated since the post-Godhra riots by walking out on television hosts or by displaying an aggression in media interaction which he did as chief minister. But his disdain and aggression does not even touch the fringes of what P. Chidambaram has practised over the years. Which may not be surprising: most people have now forgotten that Chidambaram was the architect of the most repressive media legislation in India, dropped only under intense pressure - that is, if the press censorship imposed by Indira Gandhi during the Emergency is excluded.

When Chidambaram was Rajiv Gandhi's blue-eyed boy, he drafted a bill which, had it become law, would not have allowed scams like the Adarsh housing in Mumbai, 2G or coal allocation to see the light of day. The bill was killed because it brought the entire media, even Rajiv Gandhi's friends such as M.J. Akbar and Nehru-Gandhi family loyalists like Khushwant Singh out on the streets. They marched along the national capital's Rajpath, arm in arm with professional media agitators like Kuldip Nayar and all-weather friends of every government in the media, who shall remain unnamed. This scenario was played out even in small towns that published newspapers.

Within the NDA government, what happened in Ufa is not an exception. When a Sydney mall was attacked last year and there was a consensus among security agencies worldwide to release minimal information till hostages were rescued, Venkaiah Naidu, the parliamentary affairs minister, became that day's media darling when he released full details of an Indian hostage, Viswakanth Ankireddy, details that the Australian government had withheld from its media.