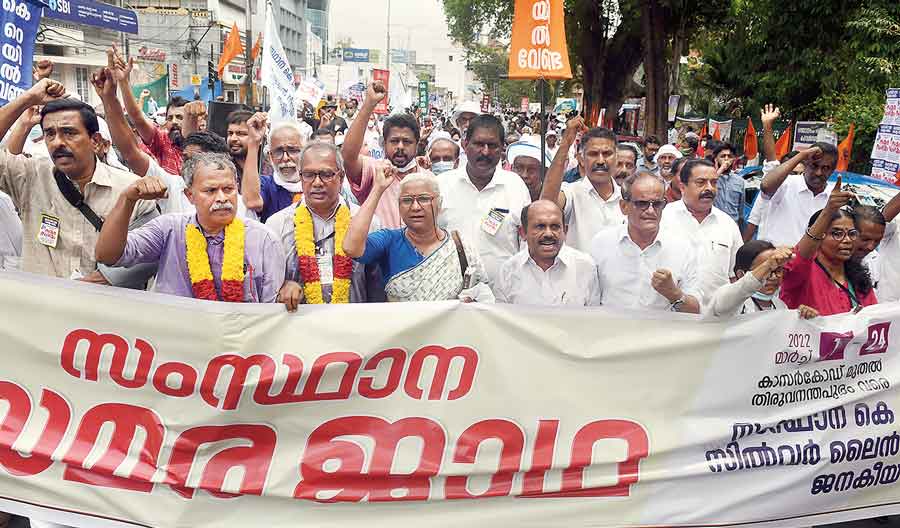 Members of K-Rail Janakeeya Samara Samithi during a protest march against the SilverLine project.
File Photo
M.G. Radhakrishnan   |   Published 28.03.22, 01:46 AM

Similarities between Kerala and Bengal are legion. Politics, cinema, literature, football or even the love for fish — Malayalis and Bengalis are comrades in most.  The latest in this list is the spectacle being witnessed now in Kerala that is strikingly similar to what happened in West Bengal a decade and a half ago — the raging controversy over the Left Democratic Front government’s resolve to set up a Rs 64,000 crore, semi-high-speed railway corridor named SilverLine. All over Kerala, people, including women and children, are clashing with police and uprooting the stones laid for the railway line’s alignment survey to protest against the acquisition of land for the project. Opposition parties and many religious groups have lent support to the agitation. The media are filled with heart-rending scenes of wailing mothers and children being dragged and pushed by the police. The agitation appears to be taking a more violent turn with the government issuing dire warnings.

Human-rights activists, environmentalists, economists, engineers and cultural representatives have joined the issue. Apart from the human displacement, the project, which has an international debt component of 60 per cent, it is being feared, would send the cash-strapped state’s high public debt burden through the roof, especially since the Central government has refused to guarantee foreign loans. SilverLine is also likely to exacerbate Kerala’s fragile environment, which has been ravaged recently by extreme climate events like recurring floods. But the government insists that SilverLine — Kerala’s biggest-ever infra project — is likely to catapult the state onto a high-growth trajectory with the least environmental damage.

SilverLine is to run on a 530-kilometre-long, stand-alone, standard gauge electric line connecting the state’s northern and southern tips in four hours. It envisages a maximum speed of 200 kmph and a daily ridership of 80,000 when completed by 2026. The ridership is projected to double by 2050 when the annual revenue is expected to reach Rs 45,000 crore. The project is being implemented by the Kerala Rail Development Corporation, a joint venture by the Kerala government and the Union ministry of railways. However, following repeated requests from the Kerala BJP to stall the project, the Union government has said that final clearance has not yet been given for it. The Union railways minister, Ashwini Vaishnaw, stated that land acquisition for the project cannot be permitted without the final location survey, land plan, ecological and technical clearances and so on. Even as the agitation intensified in Kerala, the chief minister, Pinarayi Vijayan, met Prime Minister Narendra Modi at Delhi on March 24 to request Central clearance. Later, Vijayan claimed that Modi was positive towards the project. Congress MPs from Kerala, who held protests near Parliament House when Vijayan and Modi met, were beaten by the Delhi Police.

As per a preliminary estimate by K-Rail, 1,400 hectares of land would be acquired for the project, about 2,000 families would be relocated, and 10,000 buildings demolished. According to the government, about Rs 13,000 crore of the project budget is earmarked for rehabilitation and compensation.

The controversy is a reminder, in multiple ways, of the happenings in Bengal when the Left Front government launched industrialization projects in  Nandigram and Singur in 2006. Even the accusations and epithets being hurled at each other by the LDF and the Opposition — the Congress and the Bharatiya Janata Party— are similar to what was seen in Bengal. In an ironic role reversal, the Congress and the BJP in Kerala today are rebuking the Left as ‘anti-people neo-liberals’. In return, the Left dubs them as ‘anti-development’ forces trying to block the mega project.

Like Bengal’s former chief minister, Buddhadeb Bhattacharjee, Pinarayi Vijayan, Kerala’s current chief minister, who is personally driving the project, is facing similar charges of being ‘arrogant and obstinate’. According to critics, Vijayan’s arrogance has also been compounded by his successive electoral mandates like those in favour of Bhattacharjee then. They also predict that Vijayan, too, would meet the same fate as Bhattacharjee that has led to the near-eclipse of Bengal’s once-dominant Left.

The Congress’s V.D. Satheesan, the Opposition leader, has said that “SilverLine would be Vijayan’s Singur and Nandigram” and accuses the Left of double standards. “They opposed the Mumbai-Ahmedabad Bullet Train project tooth and nail. But have no qualms to go with a similar project in Kerala,” he said. The only dissent from the Congress camp initially was by Shashi Tharoor, who refused to join the anti-SilverLine bandwagon saying that he had to study the project before taking a view. V. Muraleedharan, the Union minister of state for external affairs, warned that SilverLine would never be given Central clearance. “Vijayan’s arrogance would see CPI(M)’s end in Kerala,” he said.

SilverLine’s defence has largely come from the Communist Party of India (Marxist) in the LDF. “It is a political and communal ganging up as seen during the Liberation Struggle against the first Communist government of 1957. They are provoking a police firing as happened in Nandigram”, accused Kodiyeri Balakrishnan, the CPI(M) state secretary. Vijayan has reiterated that the state government would go ahead with the project whatever be the hurdles, and that more than four times the market price is being offered as compensation for land to be acquired for the project. Technocrats like E. Sreedharan, the ‘Metro Man’ currently aligned with the BJP, have led a virulent campaign against the project, calling it technically, environmentally, and economically hare-brained. Among other critics are Medha Patkar, Madhav Gadgil, Prashant Bhushan and the urban planner, K.T. Ravindran.

Like in Bengal, where many pro-Left intellectuals opposed the projects in Nandigram and Singur, the Kerala Sasthra Sahithya Parishad, a well-known Left environmentalist group, has lambasted the fully-fenced SilverLine as disastrous for a flood-prone Kerala as the high embankments would block the free flow of rivers and stormwater. Pro-Left economists have slammed the project as financially catastrophic. Like in Bengal, all the Opposition parties, Maoist groups, outfits like the Popular Front of India, the Rashtriya Swayamsevak Sangh and many Church leaders have joined hands to oppose the project. Like the Revolutionary Socialist Party in Bengal’s Left Front that opposed the Nandigram project, there were some initial rumblings against the project from the Communist Party of India within Kerala’s ruling LDF; but that fizzled out after the secretary, Kanam Rajendran, put his feet down.

Like Bhattacharjee in 2006, Vijayan too appears to be in a hurry to salvage the state from industrial stagnation. Vijayan seems to believe that the successive electoral mandates permit the bulldozing of the project, rubbishing the charges of the Opposition as being politically motivated. Like Bhattacharjee, Vijayan has been seen by many as a ‘market-friendly Marxist’. A vision document Vijayan presented at the recent state CPI(M) Conference for Kerala’s future called for ending militant trade unionism and the opening up of higher education and industrial sectors for private and even foreign investment — things that the CPI(M) opposed till now.

Despite the state CPI(M)’s stubborn stand, its central leadership appears to be dodging the issue. When asked about it, the party general-secretary, Sitaram Yechury, washed his hands off the matter by saying Vijayan was capable of answering such questions.

(M.G. Radhakrishnan, a senior journalist based in Thiruvananthapuram, has worked with various print and electronic media organizations)