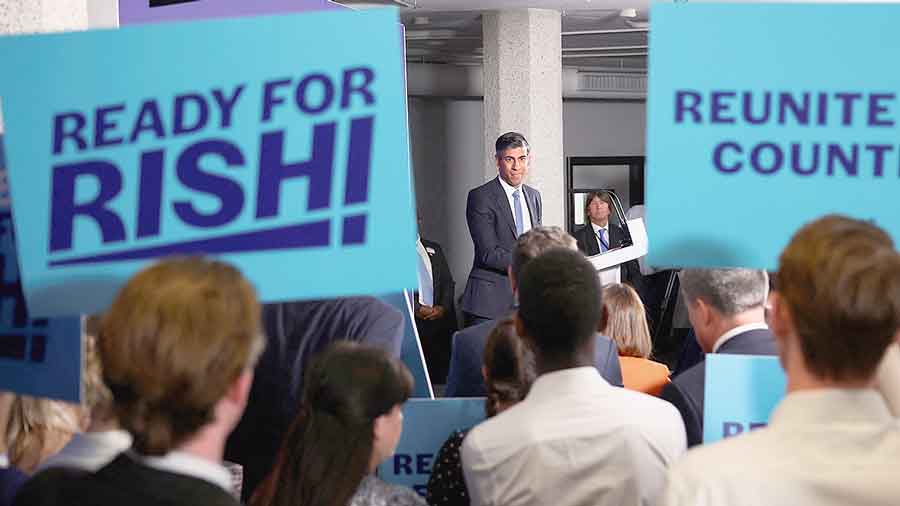 An elaborate but structured system of choosing the party leader has become the hallmark of British democracy, ever since it was collectively decided that the matter was far too important to be left solely to either the prerogative of the monarch or the wishes of the sitting members of Parliament. Yet, while riveting contests — for instance, the nail-biting race involving Denis Healey and Tony Benn in 1981 for the post of deputy-leader of the Labour Party — have never been unusual, there is something qualitatively different in the ongoing contest to select not merely a new leader of the Conservative Party but also the prime minister to succeed Boris Johnson. The big visible difference that has been noticed and indeed commented on — mostly approvingly — is the significant presence of a very large number of aspirants from Britain’s ethnic minority population.

This includes Rishi Sunak, the former chancellor of the exchequer and, at present, the frontrunner in Westminster — although not among the party members in the constituencies who will have the final say. It also had Kemi Badenoch, a feisty politician of Nigerian origin, who made quite a splash on the strength of her ability to articulate the conservative distaste for Woke attitudes that are disfiguring institutions. Two other candidates who didn’t quite garner sufficient support among MPs included the present chancellor of the exchequer and former education secretary, the cerebral, Iraqi-born Nadhim Zahawi and the attorney-general, Suella Braverman, who is of Indian origin. When you look back at the fact that the first post-War MPs from the ethnic minorities were elected as recently as 1987 — there were, of course, at least three MPs of Indian origin, all Parsis, who represented London constituencies around the turn of the previous century — there has been a colossal advance. The official estimates of the House of Commons suggest that there were 65 MPs from the ethnic minorities elected in the general election of 2019.

What is, however, interesting and noteworthy is that despite the presence of four ethnic minority candidates in the original field of eight, identity politics — a euphemism for race—has not featured even remotely in the debates over the future of Conservative politics. Part of this can be explained by the fact that they represent constituencies where non-white voters are electorally insignificant. In short, their political appeal to their constituents has not remotely depended on their ethnicity but on their ability to secure acceptability as a worthy representative of their party and local interests. This indicates both the reality of their integration in British society and the growing colour blindness of large tracts of contemporary Britain.

The indifference to colour and racial origin in the traditional Conservative belt may well be contested by many who have found English society to be inward looking and naturally suspicious of people with unfamiliar names. I know of many Indians, particularly those living in Greater London and other big urban centres, who have spent their working lives without any meaningful social interaction with white Britons. The facile explanation that this is due to ingrained racist attitudes is often uncritically accepted, not least by a small clutch of Indian diplomats who have responded to this exclusion by retreating into the self-contained world of the Asian diaspora and with an exaggerated show of prickliness in their dealings with white people. This has also helped perpetuate the myth of the British being either racists or too full of imperial condescension.

The reality is a little more complex. What is significant about someone such as Sunak is that his educational background (Winchester and Oxbridge) gave him a natural entry into parts of British society that were outside the radius of his parents who ran a modest chemist’s shop. Likewise, although her upbringing was in Nigeria, Badenoch came from the upper crust of Nigerian society and was sufficiently Anglicised by the time she attended high school and university in Britain. What made the crucial difference in both their cases, as well as with Zahawi and Braverman, was their easy familiarity with the local idiom. In contemporary Britain, class still matters in more ways than can be imagined. However, what overrides social origins is language. The ability to speak the English language fluently and colloquially remains the greatest test of larger respectability — as do many of the social and cultural assumptions that go with the language. It also helps if these can be supplemented with the connections made in school and university which last a lifetime. It is therefore no accident that Sunak is being perceived as the candidate of the Establishment, as opposed to Penny Mordaunt or, for that matter, Liz Truss. This may also explain why this rankles with a large section of the Conservative Party activists who prefer the more combative approach of Badenoch and Mordaunt.

The debates over the Conservative Party leadership have centred on the respective candidates’ sense of the British future. Yes, the uniqueness of Britain and the importance of creating opportunities, not to mention low taxes, have invariably entered the discourse, but there has been zero invocation of victimhood. This would not have been the case had there been serious ethnic minority candidates for, say, the leadership of the Labour Party. There, the cacophony surrounding the Black Lives Matter movement and the iniquities of British colonialism would have entered the picture and diverted things from the pressing issues of governance. Badenoch claimed in an interview that she hadn’t encountered racism until she was berated by Left activists for her crime of being a black person and being a conservative. The Left in Britain, as much as anywhere else, operates on the strength of social stereotypes— an experience faced by the few Indian Muslims who have chosen to go with the Bharatiya Janata Party. In such a world, there is no place for colour blindness. No wonder, an increasing number of British Indians are finding the Conservative Party their natural home.