A case for police reform 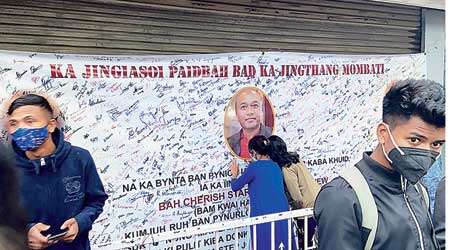 People take part in the signature campaign at Mawlai in Shillong seeking justice for the encounter death of Cheristerfield Thangkhiew.
Telegraph picture
Jade Lyngdoh   |   Published 15.09.21, 01:00 AM

An operation carried out by the Meghalaya police to arrest a former militant of the banned Hynniewtrep National Liberation Council resulted in an accused being shot dead. Following allegations of human rights abuse, a judicial inquiry was constituted alongside an independent inquiry by the Meghalaya Human Rights Commission.

The unfortunate incident sparked a conversation on law-enforcement personnel’s commitment to human rights. The threat was recently voiced by the Chief Justice of India, who said that human rights are at the highest risk when the accused are in police custody. These threats are real, as we have recently seen in Manipur where journalists and activists were physically assaulted after being detained under the draconian National Security Act. The Supreme Court, which set the activist free after he was arrested for a Facebook post ridiculing the use of cow dung as a Covid-19 remedy, was also ready to hear pleas to award compensation for his illegal detention.

The recent incident in Shillong leads us to examine some legal and ethical imperatives of police reform and modernization from a human rights perspective.

The need for police reform has been discussed by the judiciary, human rights bodies, academics, and non-governmental organizations. Given that law enforcement is the responsibility of the state government, the onus lies on it to ensure necessary legal reforms. The Meghalaya Police Act of 2010 was enacted with this spirit in mind. The merit of discussing this Act in the light of the incident in Shillong lies in the fact that the Act provides a framework for ensuring accountability of the police force. The first paragraph of the Act considers the “respect for and promotion of the human rights of the people and protection of their civil, political, social, economic and cultural rights”. The legislation provides for the setting up of independent bodies to oversee the functioning of the state police, which is relevant to this discussion. First among these is the State Security Commission, tasked with being a watchdog to, inter alia, ensure observance of human rights standards. The second — the Accountability Commission — is responsible for inquiring into allegations of serious misconduct against police personnel.

Two issues arise concerning the functioning of these two independent bodies which reflect the callous attitude of the state government. The SSC has not met in recent months, against the mandated tri-monthly sitting. The Accountability Commission, mandated to release public annual reports, is nowhere to be seen either. To ensure that law-enforcement personnel adhere to human rights standards, independent oversight of the state police is necessary. It is, therefore, important that these two bodies function in accordance with the Act.

A series of measures must be implemented in addition to this. Personnel of the Meghalaya police must be regularly and effectively trained in using proportionate force during security operations. Latest reports from the Bureau of Police Research and Development show that between 2019-20, a miniscule 0.59 per cent of Meghalaya police’s expenditure was spent on the training of personnel. This figure indicates not just the lack of human rights training of personnel but also the general absence of regular training. Training programmes for all personnel must incorporate domestic and international standards and principles of law enforcement, including the preference of using non-lethal force to achieve an operation’s objective. Given the enhanced risk of sexual assault in police custody, personnel must also be trained in gender-sensitive policing.

Accountability is incorporated into the police’s standard of operating procedures; there is also the need to implement mandatory after-action reviews. AARs are used to prevent, mitigate and address any human rights violation. They can be useful for the state police to strengthen future responses to security operations that involve hostiles. A mandatory AAR to be filled by the officer-in-charge of each police operation would serve as an important feeder for review by the independent bodies tasked with the oversight of the state police.

These are a few measures through which the police can ensure that incidents such as the recent security operation do not occur again. One hopes that state police and civil society will learn crucial lessons from this incident and strive to attain actionable accountability in practice in the future.