Maulana on a mission 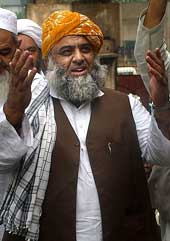 Maulana Fazlur Rahman, the secretary general of the Islamic fundamentalist Muttahida Majlis-e-Amal and head of the Jamiat-e-Ulema-e-Islam, has had a highly successful visit to India. But is there more to his visit than meets the eye?

The answer to these questions depends on whether the maulana was in India off his own bat or whether he was playing a deeper role in India-Pakistan relations. If he was here of his own accord, then the maulana’s aim seemed to have been to send two important signals. To the Americans he seemed to be saying that he was a moderate even if he were opposed to General Pervez Musharraf. To the Indian Muslims he said that Kashmir is an issue which needs resolution but that it was essentially a distraction to the larger role that south Asian Muslims must seek. The whole projection of his persona seemed to suggest that after 9/11, the leadership of Muslims can no longer come from west Asia but from this region.

The petrodollar-driven leadership of the Muslims of the world has been discredited. The other leading Muslim countries of west Asia have either resigned themselves to American hegemony or, like Iran, are seeking to avoid collision with it. The leadership of the Muslim umma (brotherhood) cannot come from Indonesia or Africa. It must come from south Asia. Or so the logic goes. For this to happen, the India-Pakistan conflict must be resolved — the civilizational conflict of Islam is not with India but with the United States of America.

However, this is only one way of looking at Maulana Fazlur Rahman’s visit. There could be a more interesting hypothesis — that Maulana Fazlur Rahman came to India with the explicit consent of both Islamabad and that of the Indian leadership. Consider the facts of the maulana’s visit — although facts are stranger than fiction in India-Pakistan relations.

The prime minister of India refuses to meet Mir Zafarullah Khan Jamali, his Pakistani counterpart, or General Pervez Musharraf; he even refuses to meet the leaders of the All Party Hurriyat Conference who are no terrorists. But he finds time to meet Maulana Fazlur Rahman, a known jihadi leader. It is no secret that the maulana helped father the taliban movement and provided ideological impetus to the Deobandi paramilitary organization, Harkat-ul-Ansar (later renamed Harkat-ul-Mujahideen). His anti-American statements and activities have resulted in restrictions being placed on his travel to the US. But ostensibly uncaring of US sentiments, Atal Bihari Vajpayee agrees to meet the maulana at home.

Vajpayee then goes a step further. He confirms his participation in the south Asian association for regional cooperation summit to the maulana, the leader of the opposition in the National Assembly, rather than to the host of the summit — the government in Islamabad.

And to top it all, Vajpayee chooses the biggest detractor of Jamali to send him a letter — as if the restored diplomatic channels between the two countries were not a reliable enough means of delivering it.

Now consider some equally strange facts from the other side of the border. There is nothing unusual about the leader of the opposition being briefed by the foreign office before a visit abroad. But Maulana Fazlur Rahman is briefed by the entire Pakistani establishment — including the Inter-Services Intelligence and General Pervez Musharraf.

Once in India, the maulana voices opinions which are contrary to the official line of Pakistan. In Deoband, he tells fellow maulanas that Kashmir is not an Islamic issue but a dispute between two governments — just as the Indian Muslims stood by India, the Pakistani Muslims were firmly on the side of their government. He holds up the bilateral mechanism of the Simla agreement as the way forward. And then he surprises everyone by hinting that if the two governments and the Kashmiris agreed, a settlement may even be possible along the line of control.

When the maulana meets his counterparts, the Hindu taliban of the Rashtriya Swayamsevak Sangh, he tells them that trade and economic links should be used to build confidence between the two countries. The meeting between the maulana and the RSS quite curiously is facilitated by those in the higher echelons of power in New Delhi. Before departure, the maulana even ends up condemning the recent instances of militant violence in Katra and the army camp at Tanda.

The maulana has often said in the Pakistani media that Kashmir was a bilateral issue and ought to be resolved under the Simla agreement. But to say things contrary to what Islamabad wants to hear in an “enemy country” is a very different proposition. Ask Najam Sethi, who described Pakistan as a “failed state” in a seminar in India and was promptly arrested on returning home.

When the maulana went back, he did not get the kind of roasting that Najam Sethi did. Even when he was in India, the Pakistani foreign office did not once attempt to rebut the maulana’s statements. In fact, the Pakistan high commission officials in New Delhi chaperoned him everywhere and even hosted a lunch in his honour.

On his return, the maulana was brave enough to say that the Kashmiri militants should not be expected to be armed for ever and that the people of Kashmir deserved to live in peace. He refused to retract any of his statements made in India. Yet, hardly anyone of any significance criticized him publicly. What is more, the maulana was invited by Jamali to the prime minister’s house where he briefed him about his productive visit. These facts make sense only if we assume that the maulana’s visit was being facilitated by both the Indian and the Pakistani establishments. And perhaps, lurking behind the scenes, were the Americans as well.

On the face of it, the maulana’s visit has achieved its aim. When those identified with extremist positions talk in moderate terms, the constituency for peace is broadened and the possibility of peace increases. In this sense, Maulana Fazlur Rahman has lighted a thousand candles for peace in both countries.

When as the secretary general of the hardline MMA, Maulana Fazlur Rahman expresses sane opinion on contentious issues, it strengthens those in Islamabad who want to make a serious attempt at brokering peace with India. Neither Musharraf nor Jamali could have said in India what the maulana said on Kashmir, on the Simla agreement or on a possible border settlement along the LoC. They would have been accused of selling out Pakistan’s interests. Now, after his visit, if these issues were to come on board, their legitimacy would increase.

Another objective of Maulana Fazlur Rahman’s visit seems to have been to open a dialogue with the Hindu hardliners. The maulana did well to impress upon Vajpayee the need to send parliamentarians from the Bharatiya Janata Party to Pakistan. In the event, the RSS will also be sending a delegation for an interaction with Pakistan’s political leadership.

If the extremist elements on both sides are helped to chip away at each other’s prejudices, they may even come to the conclusion that the future of the subcontinent lies in learning to live together. There are less chances then of the peace process between India and Pakistan being sabotaged. Whoever facilitates this process is doing a signal service to both India and Pakistan.