The end of the American century 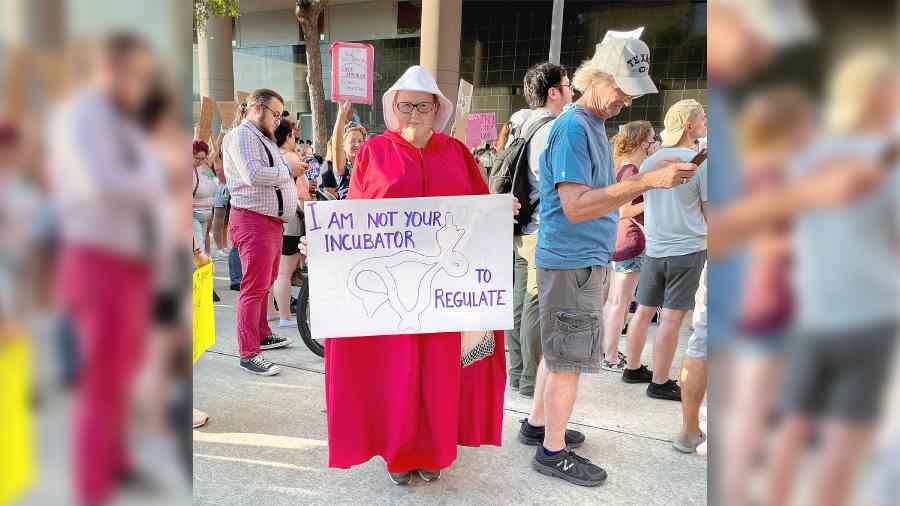 The US’s abortion turnaround is globally significant because the US is still the most influential country in the world.
The Telegraph
Mukul Kesavan   |   Published 26.06.22, 02:19 AM

The US Supreme Court has reversed its 1973 decision and eliminated the constitutional right to abortion. This allows every state legislature in the United States of America to regulate abortion. Many of them are expected to effectively ban abortion by making it illegal at any stage of pregnancy without any exemptions for rape or incest.

The domestic significance of this decision can be left to American commentators. As outsiders, living as we do in a post-war world substantially shaped by the US, it’s useful to reflect on what this decision tells us about America.

Most obviously, this decision and its likely legal implications make the US an outlier amongst first-world nations. Spain, a conservative Catholic country, liberalised its abortion law in 2010 by legalising the voluntary termination of pregnancy during the first fourteen weeks of a pregnancy with exemptions for later abortions if the child had foetal defects or if the pregnancy was a serious risk to the health of the mother.

One of the last hold-outs, Catholic Ireland, repealed its Eighth Amendment, which effectively banned abortion, in 2018. Indians have a particular interest in this development because it was the death of Savita Halappanavar, a 31-year-old dentist in an Irish hospital, that fired up the campaign that saw the amendment repealed six years later.

In 2012, Halappanavar was 17 weeks pregnant when she went to hospital with back pains and doctors diagnosed a miscarriage. They refused to perform an abortion because Irish law made that illegal so long as the foetus had a heartbeat. By the time the foetus died and the abortion was performed, she had an infection as a result of the delay and she died the day after.

The backlash to this dreadful, unnecessary tragedy has led to a law which, like Spain’s, allows abortion during the first three months of pregnancy and even later if there is a risk to the life of the pregnant woman or if the foetus suffers from a fatal abnormality. Laws like these are, in effect, the common sense of modern nations.

Even in conservative Japan, where abortions are de jure illegal, the law carves out broad exceptions that allow the procedure to be widely used. Germany made its abortion law more permissive in 1976, three years after the Roe vs Wade judgment. Germany, like Japan, formally protects the life of the foetus from the moment of conception, but allows abortion in the first trimester of pregnancy without penalty if the pregnant woman has been formally counselled or if her health is seriously endangered.

It’s worth citing these examples to illustrate the extremism of the laws passed by conservative US state legislatures, which will now be implemented thanks to the recent Supreme Court decision. Arkansas’s law, for example, passed in July 2021, bans providers from performing abortions “except to save the life of a pregnant woman in a medical emergency” and makes no exceptions for instances of rape, incest, or foetal anomalies. Anyone who violates the law faces ten years in prison and a massive fine.

The US’s abortion turnaround is globally significant because the US is still the most influential country in the world. The West’s sense of itself is anchored by America. Atlanticist intellectuals, military alliances like NATO, the United Nations and its affiliated institutions, base themselves, rightly or wrongly, on the presumption that the US is a force for good. When the US legalised gay marriage, other countries followed suit.

Donald Trump’s most durable legacy was the question mark he put against this presumption in his time in office. The reversal on abortion is his hallmark achievement: he was the president who appointed three conservative Supreme Court justices during his tenure, all three of whom voted to strike down Roe.

On hearing of the Supreme Court’s decision, Britain’s prime minister, Boris Johnson, said, “It’s a very important decision. I’ve got to tell you, I think it’s a big step backwards. I’ve always believed in a woman’s right to choose and I stick to that view and that is why the UK has the laws that it does.” Johnson is a Conservative politician who got along famously with Trump. It’s unlikely that the reversal on Roe will make any difference to the United Kingdom’s geopolitical relationship with the US. But there is such a gulf between modern American reaction and the social consensus of Western Europe that Johnson was forced to put clear blue water between himself and America’s hard turn to the right on abortion.

Johnson is exactly right. It feels like a great leap backwards, almost as if America were rewinding time. Before the Roe decision, the state of Texas found an ingenious way of banning abortion without falling foul of Roe. The law empowered citizens to sue anyone who assisted in an abortion, thus keeping the State out of the process. It created a class of bounty hunters who stood to profit from policing their neighbours to the tune of 10,000 dollars. In a move worthy of a Victorian patriarch, Texas licensed vigilantes to police pregnant women. The US Supreme Court refused to stay the law.

Amy Coney Barrett is central to this impression that America is walking on a travelator going in the wrong direction. Barrett was crucial in the overturning of Roe. Not only because she is a hard-right conservative but because she is a woman. A judicial majority ruling on women’s bodies made up exclusively of men would have been more than a little embarrassing. Barrett provided both cover and justification. She had argued earlier that the burden of bearing and raising unwanted children had been solved by the ‘safe haven’ laws that made it legal to give up children for adoption immediately after their birth. The near-medieval idea that women were walking wombs who could be reasonably deprived of agency by the State was made plausible by Barrett’s willingness to make these arguments.

It’s likely that the undoing of Roe is the start of a greater unravelling. Samuel Alito tried to argue that cancelling Roe did not imply the inevitable erasure of other rights based on the right to privacy, such as same-sex marriage or access to contraception. His fellow right-winger on the bench, Clarence Thomas, hadn’t got the memo: immediately after the Roe reversal, Thomas called for all due-process decisions of the court, including the legalisation of gay marriage, to be reviewed.

Given the likelihood of Republicans winning majorities in both Houses after the mid-terms and the distinct possibility of a right-wing extremist like Florida’s governor, Ron DeSantis, winning the presidency, America’s quickstep backwards into the prejudices of its past seems fated to continue. A country where six justices can cancel a woman’s right to her own body while affirming the unrestricted right of Americans to carry arms in public is a cautionary tale, not a beacon. Nations, like fishes, rot from the head down. It’s fitting that the Supreme Court of the United States of America has signalled the end of the American century.