Once a disaster makes light work of existing structures, it is important to replace those with thoughtfully designed alternatives 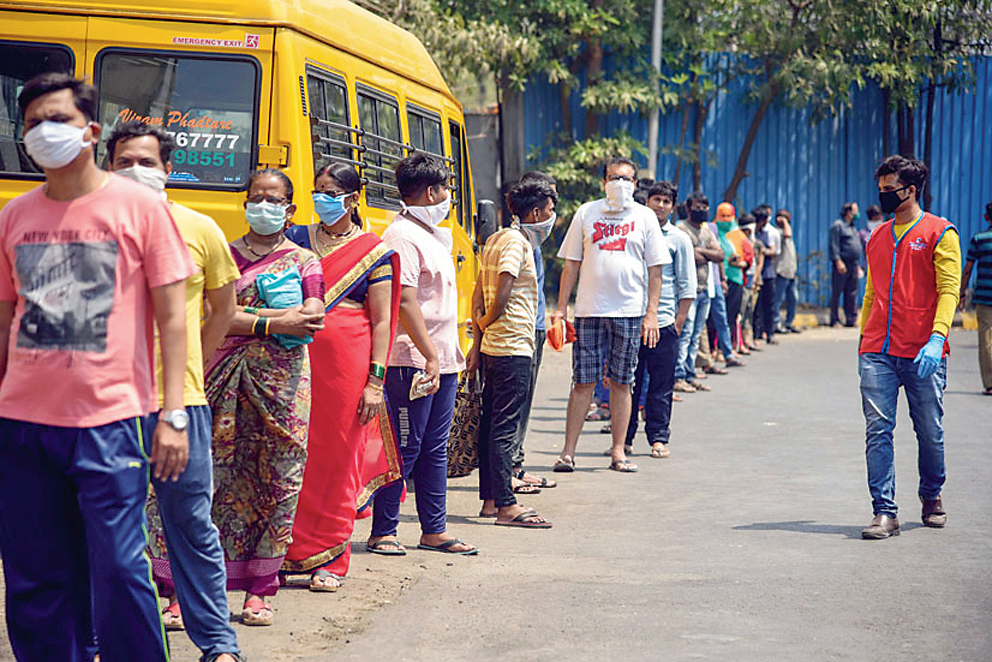 People wearing masks stand in a queue outside a grocery store during a 21-day nationwide lockdown in the wake of coronavirus pandemic, in Navi Mumbai, Wednesday, March 25, 2020.
PTI
Arghya Sengupta And Biswanath Ghosh Dastidar   |   Published 21.04.20, 08:27 PM

The coronavirus pandemic found governments in India and the world in varying degrees of unpreparedness. Given the circumstances, state governments and the Government of India reacted reasonably quickly in setting up new bureaucratic structures. From early March itself, several states used the Epidemic Diseases Act, 1897 to announce a slew of measures. The GoI used the Disaster Management Act, 2005 to impose a nationwide lockdown followed by the establishment of 11 panels to oversee various aspects of containment and mitigation.

Each of these panels dealing with diverse matters, ranging from data sharing to procurement of testing kits, was created overnight to oversee existing systems with entrenched ways of working. That they have not been able to significantly ramp up testing yet or could not foresee the travails of migrant labour is not a personal failure on anyone’s part. It is rather a testament to a system that never contemplated a pandemic and is scrambling gamely to find solutions when faced with one.

This systemic gap can be traced back to the legal framework itself. The Epidemic Diseases Act empowers state governments to take necessary measures beyond its allocated legal powers. Critically, however, it does not spell out what such measures can be. This is because the rationale for the legislation was not to devise a response protocol, but rather to clothe the colonial government with police powers. In a later amendment, the Central government gave itself limited powers under this Act to inspect any ship or vessel leaving or arriving in India. That might have been a sensible amendment in 1920, but is clearly outdated today.

This is why the Central government was compelled to use the Disaster Management Act, 2005. A cursory look at the Act and the National Disaster Management Plan will make it clear that it is designed to react to natural calamities like earthquakes and floods than to ensure pandemic preparedness. There is no protocol for the administrative steps to be taken should a pandemic befall us. This is why over 400 Central government and 2,000 state government directions on diverse matters have been issued on the fly. They may be necessary, but amount to reinventing the wheel every time disaster strikes.

If we are to reinvent the wheel once, it is imperative that we adhere to the principle of ‘build back better’. Once a disaster makes light work of existing structures, it is important to replace those with thoughtfully designed alternatives. This can only happen by mainstreaming elements of disaster risk reduction into existing institutional systems. This will incur significant costs upfront. But several studies have shown that such disaster resilient alternatives are likely to save the exchequer money, up to 7 dollars in the aftermath of every disaster for every 1 dollar spent.

Such mainstreaming can only happen if India enacts an overarching pandemic preparedness law. This legislation must have an integrated plan for five phases of pandemic intervention: disease surveillance in the interpandemic phase; containment and management in the alert phase; impact mitigation in the pandemic phase, when the first wave hits; drug and vaccine development beyond the first wave in the pandemic phase; and continued capacity-building and monitoring in the post-pandemic phase. For each of these phases, mainstreaming implies that a few measures must become part of everyday practice. Random thermal screening at airports and offices and establishing efficient data sharing networks are prime examples.

These five phases should be administered by a single clear downstream chain of command, with an upstream flow of information and horizontal channels of collaboration to enable a coordinated whole-of-government response. This should take the form of a National Crisis Management Group, an apex policy body headed by the prime minister comprising all chief ministers of states. This will ensure leadership and capture India’s federal character as a country. This body will act on the advice of the Public Health Standards Authority, a new autonomous institution. The PHSA will define minimum required public health standards and provide uniform case definitions. It will be the sentinel ensuring continuing compliance during times of pandemics and, equally critically, at other times as well. At the state level, crisis management must be led by the State Crisis Management Group. This should be an executive body headed by the chief minister of the state with all district magistrates represented.

These two bodies apart, the rest of the chain of command must terminate at the level of each district. Each district should have Crisis Management Units headed by district magistrates. It is the district magistrate who will do the hard work of ensuring on-ground implementation of the protocols established by the law, especially in phases I and V when the threat of a pandemic is neither imminent nor real. To ensure that this task is not overlooked, each district should be periodically audited by the PHSA for its pandemic preparedness.

The protocols to be followed by the various authorities will be in the form of a tiered Pandemic Response System Activation, which would be activated by the NCMG in the event of an alert. This matrix would classify threatened public health impact and required responses. Critical amongst them is the need for clear and effective communication to the public and protection of rights of citizens. Given police excesses and proliferation of fake news during the present pandemic, this is a sine qua non.

Ultimately, the success of any pandemic preparedness law will be contingent on the resolve of citizens and governments to not be caught napping. This is easier said than done. Especially in India, where our ability as citizens to inculcate a scientific temper as mandated by the Constitution is questionable and where governments have routinely failed to walk their talk on providing high-quality public healthcare, safe running water, population control and environmental protection, The coronavirus pandemic must signal a sea-change. India cannot simply return to business-as-usual. Passing a pandemic preparedness law in the monsoon session of Parliament can mark an appropriate new beginning.

A. Sengupta is Research Director, Vidhi Centre for Legal Policy. B. Ghosh Dastidar is a visiting academic at Cambridge University and co-Founder, Doctors for India. Views are personal