Bengal politics has taken an interesting turn after Amphan 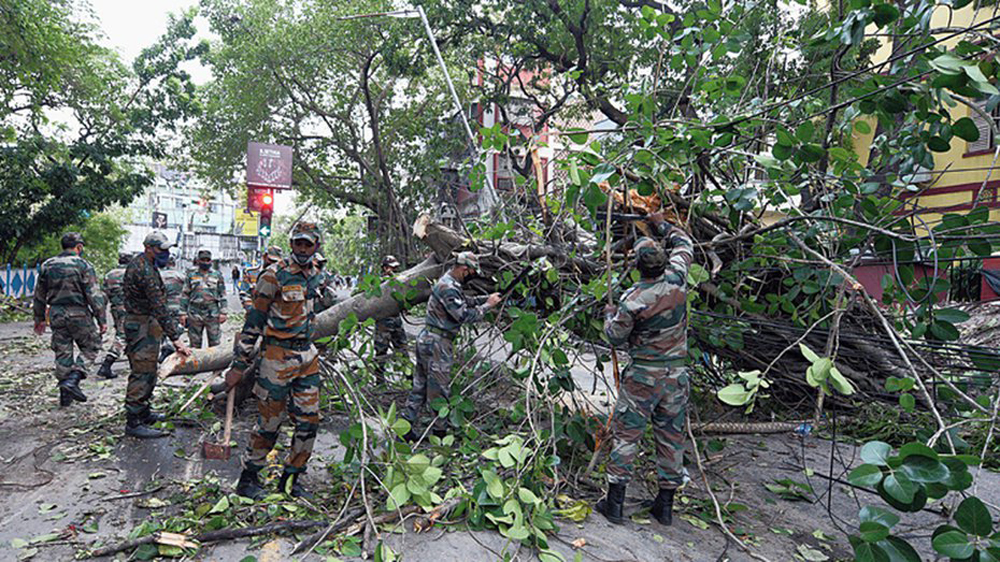 In 2012, vicious riots involving Bodos and Bengali-speaking Muslims were witnessed in the district of Kokrajhar, Assam. The incident, in which 77 people died and nearly four lakh people were displaced, was serious enough for the then prime minister, Manmohan Singh, to undertake a personal visit. However, it wasn’t deemed important enough for the television news channels to despatch teams. When asked about this lapse, a prominent editor offered a telling explanation. Kokrajhar, he suggested, was a casualty of the “tyranny of distance”. In plain English, it meant that while all Indians were equal, some were always more equal than others — depending on the proximity to the centres of information.

It is the tragedy of the West Bengal chief minister, Mamata Banerjee, that unlike most cyclonic storms in recent times that fortuitously skirted West Bengal — apart from the Midnapore coast — and hit either Odisha or Bangladesh, Cyclone Amphan chose Calcutta, Howrah and the two districts of 24 Parganas as its target. The cyclonic storm, with winds of 130 kilometres per hour, blew Calcutta off its feet, resulting in the flooding of streets and the uprooting of an estimated 5,000 trees, big and small.

More than the actual damage to life and property in the metropolis, it was the frightening ferocity of Amphan that left people shaken and traumatized. Although the storm was over in 90 minutes or so, equally traumatic was the cyclone’s aftermath — clearing the debris inside homes, negotiating a path through the fallen trees and, above all, coping with expected disruption of water supply and electricity. Whereas rural folk have greater resilience in coping with natural calamities, this was a novel experience for many city residents. Quite predictably, their levels of anxiety were heightened.

The arrival of Amphan was anticipated. For at least five days before it hit the coast in the early evening of May 20, meteorologists had alerted people about its possible course and gathering momentum. There was absolutely no question of anyone, least of all the state government and the municipal authorities in Calcutta and adjoining Bidhannagar and Howrah, being taken by surprise. In her eventful media briefings each afternoon at Nabanna, Banerjee claimed that the state’s disaster management set-up was in a state of utmost readiness and prepared for all eventualities. An advertisement, seen in social media at least, even suggested that a special fund of Rs 1,000 crore had been set up to manage some of the expected damage from the cyclone.

Although faith in the capacities of the state government, particularly its idiosyncratic sense of priorities, had been shaken by its unsure handling of the Covid-19 pandemic, those with faith in the famed ‘inspirational’ capacities of the chief minister were sure that Amphan would be an opportunity for the state administration to redeem itself. The optimism was also born of political calculations — always over-important in an over-politicized state such as West Bengal — too. Greater Calcutta has been at the heart of Banerjee’s hold on the state. She cut her teeth in politics in Calcutta and it was from the city and its adjoining areas that she spread her influence across West Bengal. The Trinamul Congress has a strong presence in every by-lane and nearly every Puja committee of Calcutta. Even in the 2019 general election, when it was badly bruised by the Narendra Modi wave in the periphery, the chief minister’s hold on Greater Calcutta remained unshaken.

Unlike the Left Front — at least during Jyoti Basu’s long tenure — which pursued a policy of benign neglect of Calcutta, preferring to focus on the countryside, the city’s beautification and upgradation of its infrastructure were central to the TMC agenda. For Banerjee, the choice of municipal councillors in Calcutta and Bidhannagar is as important as determining who would be her party’s MLAs. This may explain why the inevitable postponement of municipal polls due to the Covid-19-related lockdown was followed by the responsibilities of running the municipalities being entrusted to TMC loyalists, rather than bureaucrats, as is the norm.

At the risk of over-interpretation, it now seems that the dual impact of Covid-19 and Amphan cyclone has been politically catastrophic for Banerjee. Whether the chief minister had underestimated the severity of the storm, just as she had initially brushed off the grave threat from the coronavirus, is best left to court chroniclers. However, there is no doubt that the chief minister who faced the media shortly after the cyclone had passed Calcutta was shaken, distraught and totally despondent. The initial suggestion by her critics that she would milk Amphan emotionally to rally the state in the grand project of reconstruction proved to be an over-estimation of her political nous.

First, while it was understandable that she would appeal to the Centre for emergency funds to cope with the devastation, the sheer speed with which the prime minister, Narendra Modi, agreed to visit Calcutta and undertake an aerial survey of the affected districts and confer directly with the state administration was, to say the least, unanticipated. Modi’s announcement of an emergency relief package of Rs 1,000 crore may not have been exceptionally generous but it exactly matched the sum the state government had kept aside for handling the after-effects of Amphan. More to the point, it deprived Banerjee of the one plank Bengal’s politicians have used unfailingly since 1977, and with some success: the Centre’s alleged indifference to the plight of West Bengal. If nothing, Modi demonstrated that he too had a big political stake in the state.

Secondly, the management of the post-Amphan devastation, particularly in and around Calcutta, suggested beyond any doubt that the state lacked even the most basic disaster management capacity. Apart from the fact that the municipal authorities lacked the personnel, equipment and the organization to clear the fallen trees, not to mention the waterlogging, there seems to have been no pre-determined coordination between the municipality and the electricity provider. Each has ended up blaming the other for failure to restore electricity to households — a situation tailor-made to bolster the impression of complete mismanagement.

The impression of a state government completely out of its depth was reinforced by the very belated invitation to the local army units to help in clearing the roads. Indeed, by the weekend, as protests mushroomed across localities — with people directing their ire at local councillors, even charging them with indifference and habitual corruption, and the chief minister wallowing in self-pity — it was clear that a political disaster was staring the TMC in its face.

In the past, as happened during its inept and disingenuous management of the ongoing Covid-19 and even the ugly communal clashes that erupted in parts of Hooghly district during the lockdown, the state government had banked inordinately on the management of news. While projecting an ‘inspirational’ chief minister has its uses in more normal times, it can prove woefully counterproductive if mainstream media reportage doesn’t correspond with people’s lived experiences. This is more so in an age when there are cheap, alternative sources of information available to people on their smartphones. In any case, neither the ‘tyranny of distance’ nor editorial diktat can work when it comes to a well-connected middle class. A disaster in Calcutta and Salt Lake can’t be made to ‘vanish’.

In the past week, West Bengal has seen the post-Amphan chaos transformed into conventional wisdom. With it, however, the bottled up grievances — over Covid-19 management, over corruption and over a mindless over-projection of the chief minister — have come pouring out. Politics in West Bengal has taken an interesting turn.