Commercial farming can save these beautiful cephalopods from being endangered 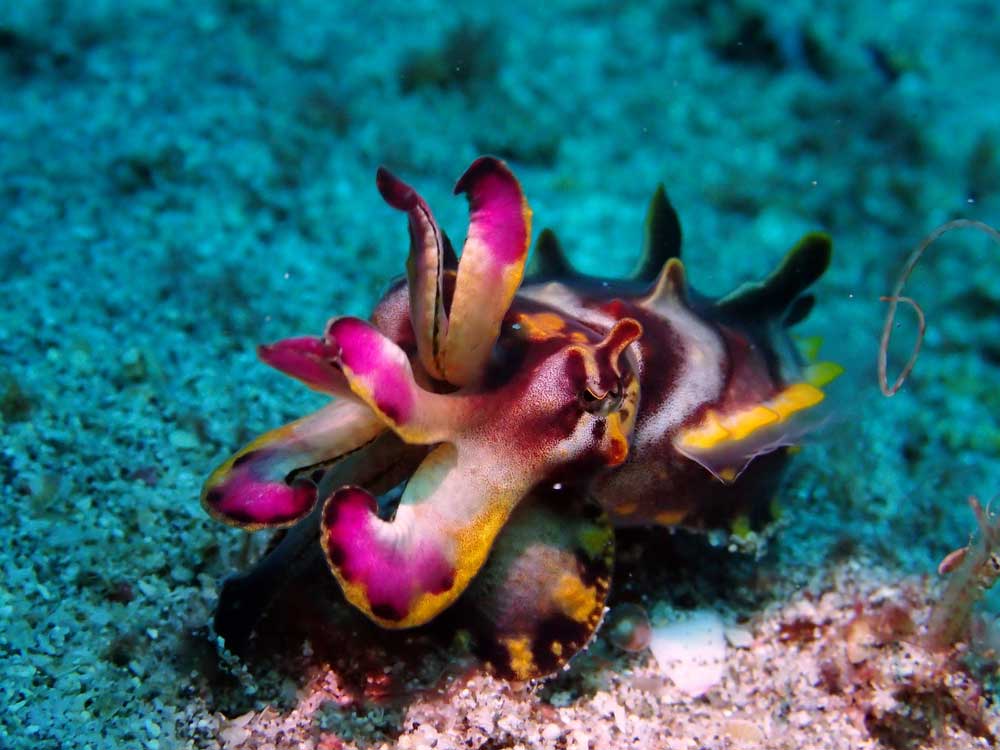 Cuttlefish camouflage themselves with the help of tiny skin cells called chromatophores, which act as pixels across their body
(Shutterstock)
The Telegraph   |   Published 01.01.19, 05:44 AM

Sir — If chameleons are masters of disguise on land, then their counterparts in the marine world are the incredible cuttlefish. These cephalopods camouflage themselves with the help of tiny skin cells called chromatophores, which come in several colours and act as pixels across the cuttlefish’s body. These creatures are also a delicacy is certain cultures. Unfortunately, this means that they are also prone to overfishing. The Maldives government recently announced plans to introduce commercial farming of small cuttlefish. One hopes that these fascinating marine animals do not face the risk of endangerment in the future.

Sir — It was shocking to witness the callousness with which the government of Meghalaya handled the crisis involving the 15 miners trapped in a 370-feet-deep illegal mine in the state’s Lumthari village since December 13. The people could not make their way out of the rat-hole mine after water from the nearby Lytein river flowed in. The authorities did not act fast enough in arranging adequate rescue operations. It reportedly took a week for the district commissioner at East Jaintia Hills to send a letter to the state government for acquiring powerful pumps to get the water out, and nearly another week before assistance was requested from the Central government-owned Coal India Limited — the world’s largest coal mining company with expertise in operating heavy pumps — for deploying the high-power pumps used in mines in West Bengal and Jharkhand. Incidentally, pumps manufactured by an Indian company were sent to save 12 boys trapped in a cave in Thailand not long ago.

Now, a diver of the National Disaster Response Force team has reported a foul smell is emanating from the mine. Pumping operations were suspended when the available pumps proved to be ineffective.

It is not only the state dispensation that is to blame; the Narendra Modi-led government at the Centre could have used its own resources to ensure timely rescue operations. It did not do so. It will be a matter of national shame — and a clear case of negligence — if the miners die because the Centre and state government did not take adequate action on time — action that they were well-equipped to take.

Sir — We ought to be ashamed that the miners in the rat-hole mine in Meghalaya remain trapped even though so many weeks have passed by. One does not even know how many of them are still alive. While such rescue operations are never easy — the depth of the mine is immense and river water has gushed in — they should have started promptly. The apathy of the Central and state dispensations towards the lives and safety of ordinary citizens is evident in the inordinately long time they took to start the process of pumping water out of the mine. This inefficiency is also reflected in the way in which natural calamities in the country — floods, earthquakes — are handled.

The suffering of the families of the trapped miners cannot be imagined. In case they lose their loved ones, not only must they receive compensation, but those responsible for such criminal negligence must be punished.

Sir — It was chilling to read about the elderly woman in Salt Lake who was stabbed by a man who broke into her flat recently. The safety of senior citizens remains one of the biggest concerns in our country. They are soft targets, and there has been an alarming rise in the number of attacks on them.

The usual motive for such attacks are the theft of cash and valuables. In many cases, senior citizens, especially women, have to respond to doorbells and attend to strangers, which puts them at higher risk. The setting-up of special cells in police stations for elderly people or the installation of CCTVs in the houses rarely act as deterrents for criminals. In several cases of such crime, security guards, drivers and domestic help are also found to be involved.

There is a tendency within Indian families to overlook the concerns of old people. The primary responsibility of ensuring the safety of elderly people at home lies with the family members.

Sir — The decision of the Election Commission to ban all kinds of tobacco at polling booths during the general elections slated to be held this year is welcome (“EC tobacco ban”, Dec 27). Tobacco products are injurious to health. There are laws to control the sale and use of tobacco products in our country; unfortunately, people smoking in public places — and even on public transport — are a common sight in India. Passive smoking also poses a great danger to the health of non-smokers. One hopes that the EC’s decision will eventually cover all future elections in the country.

Sir — Prohibiting tobacco products at polling booths during the Lok Sabha elections is a step in the right direction. The ban on the sale of cigarettes and gutkha in areas surrounding schools must also be strictly enforced, as it is regularly flouted.