Presumably all NDA seats have been won by Narendra Modi

It looks as though India has been wiped clean of the Congress, of the old BJP, and of parliamentary democracy 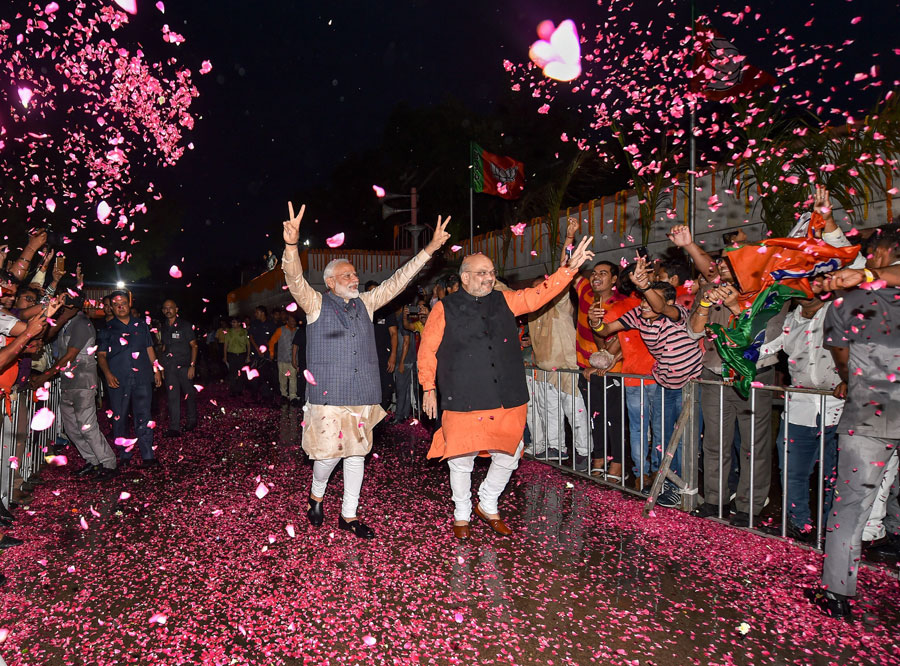 So the long drawn-out mess of these elections is finally over. Those who claimed that Modi-Shah’s BJP-RSS would return with an increased majority were right. Those who projected — or hoped — that there would be some other outcome were wrong. At this moment it looks as though India has been wiped clean, or almost clean, of the Congress, of the old Bharatiya Janata Party as we’ve known it and of parliamentary democracy as we used to understand it.

If we accept what the spokespersons of the BJP-RSS are themselves saying, it is Narendra Modi who has won each of the 352 seats that have gone to the National Democratic Alliance. So, in effect, we now have a Lok Sabha where one man sits on the treasury benches surrounded by 351 holograms of himself. On the other side we will have the ragtag Opposition. Like a tightly choreographed Chinese opera, the 351 holograms will move in machine-like unison with the Leader. The Leader will single-handedly, with his own knowledge and wisdom, decide where a country of 1.5 billion goes. This will be the government of the ‘National’, ‘Democratic’, ‘Alliance’. This is what we have to accept as a ‘democracy’ until we the people, including the thumping majority who have voted for this, decide and then find the means to replace it.

Those of us who see the macabre irony of this tragic situation, who find ourselves choking at this darkest of jokes that history has played on our country, are undeniably in the minority.

For a while now, there have been two vaguely joined layers arching over us, one being the grim reality through which we’ve been living and the other being the fictional universe created by the government and its vassal media. As these elections approached, the layers began to increasingly peel away from each other and now they have completely separated. The election results show that at the moment of voting the fictional, fantastical layer triumphed over the layer of reality. Reality may be down and out but it will rise slowly and kick back hard. That’s when things will become even more tragic.

Mr Modi’s cheerleaders are understandably ecstatic. After the destruction of the Babri Masjid, this is clearly the moment of their greatest, most triumphant exultation. ‘Forget everything else!’ they cry, ‘Modiji will be judged on his success in making India a better place!’ Let’s make sure we remember this moment, that we remember the throbbing, pom-pom-ing joy of the cheerleaders, that we remember this business about making India a better place.

Taking off from that, here is a simple question: is India even slightly better a place today than it was in May 2014?

The economy. It is tanking. Unemployment is at a record high. Foreign investors know that they can’t trust the government’s shamelessly fudged data so, instead of investing in India, they are pulling their money out. It will take a long time for the trust to be rebuilt and it will need a very different leadership to enable it. Domestically, remember Narendra Modi came to power in 2014 on the back of a grand promise of vikas. Has that happened even in a small measure? No. As every businessman and every corporate house who pumped money into the BJP-RSS coffers knows, the economy is in a much worse shape than five years ago and, depending on what happens between the United States of America, China and Iran, likely to capsize totally. And yet, such is the business community’s fear and distrust of the other parties that they are pumping fuel into the Titanic and asking Captain Namo to slam harder into the icebergs.

Corruption. One could argue that the 2019 elections were won in February 2017 when the Modi government brought in the device of electoral bonds. These bonds effectively allowed anyone, Indian or foreigner, to put money into a political party’s coffers, that is, to fund a party anonymously, without any checks and balances. Our re-elected prime minister has recently thanked the public for filling his poor fakir’s jhola with the blessings of votes. Actually we may never know who filled the fakir’s jhola with more money than was spent on the presidential and congressional elections of the richest country in the world, the US.

Corruption. Any half-decent magician will distract your attention with one hand while executing his trick with the other. While the BJP-RSS’s publicity machine kept everyone’s attention on the hard-working, never-sleeping leader, the party built up a war-chest that far outstripped all other parties’ finances. In countries where there are checks and balances on political funds so that elections aren’t that easily stolen by the rich, this would be seen as gross corruption.

Environment. Every rupee flowing into party coffers has a bill attached. Over the last five years laws and regulations have consistently been hacked away to release land to big companies. Whether irreplaceable forests or coastal reserve zones, the environment has been stripped of protection for short-term profit, and the pace of this will now increase. You could see this as a Tsunamo of greed devastating the land, or, if you’re a devout Hindu with any caring for our wonderful, magical dharti you could see this as a continuing cheer-haran of Bharat Mata by the Kauravas of capitalism.

There are other areas where one could argue that things have gotten worse: education, healthcare, foreign policy, security and the military but let’s leave all that for now.

After five years are we tangibly better off in any area at all? Yes, road-building has continued from the time of A.B. Vajpayee and Manmohan Singh, electrification and electricity distribution has continued from the previous two regimes, many rural schemes have been effectively rebranded from Congress nomenclatures to Modi nomenclatures and continued to deliver, some people have received the first component of a working toilet which is a covered latrine without a sewage connection, others have received a gas cylinder, some people have received both and some of them say that when the gas cylinder runs out they can store it in the covered toilet so that it doesn’t rust.

We can list all this, we can provide evidence the whole world would accept that instead of achchhe din these last five years have been amongst the worst, most damaging periods of our independent republic. And yet, we cannot escape the reality that Indians north of the Deccan and in Karnataka have voted in droves for the continuation of this grotesque rule. No matter what their lived reality, voters have subscribed to the fantasies Mr Modi and the BJP-RSS have sold them. Dismaying as that may be, we have to remember that building a perception takes money, and building perception on this massive a scale requires massive money, indefatigable stamina and mind-boggling attention to detail. In gathering these funds and then deploying them to devastating effect lies Narendra Modi and Amit Shah’s greatest achievement.

One of the funniest comments on TV during the vote counting was someone saying Modi and Shah will have their work cut out for them controlling the hard-line elements of the sangh parivar. Let’s get this straight — Modi and Shah are the hardest line elements of the sangh parivar, if there is someone more extremist than Shah and Modi it’s only about the cruder methods they might want to employ or the haste they are in, while trying to reach their objective of a Bharat ruled by the Hindutvaliban.

Keeping that in mind, we also have to remember that no amount of ‘carpet-bombing’ via TV and WhatsApp will change the ground reality. The repeated images of Narendra Modi will not fill a hungry farmer’s stomach; the constant propaganda and fear-mongering on his smartphone will not convince a young man that he’s employed when he is actually jobless. Soon reality will start to bite unevenly through the media and social media barrage. It is at this point that the 351 holograms sitting in Parliament will start to flicker, melt and fade. It is at this point that we must be ready with a better alternative.

After the tsunami: There are no full stops in politics