Alternatives for an electoral system that truly represents the people 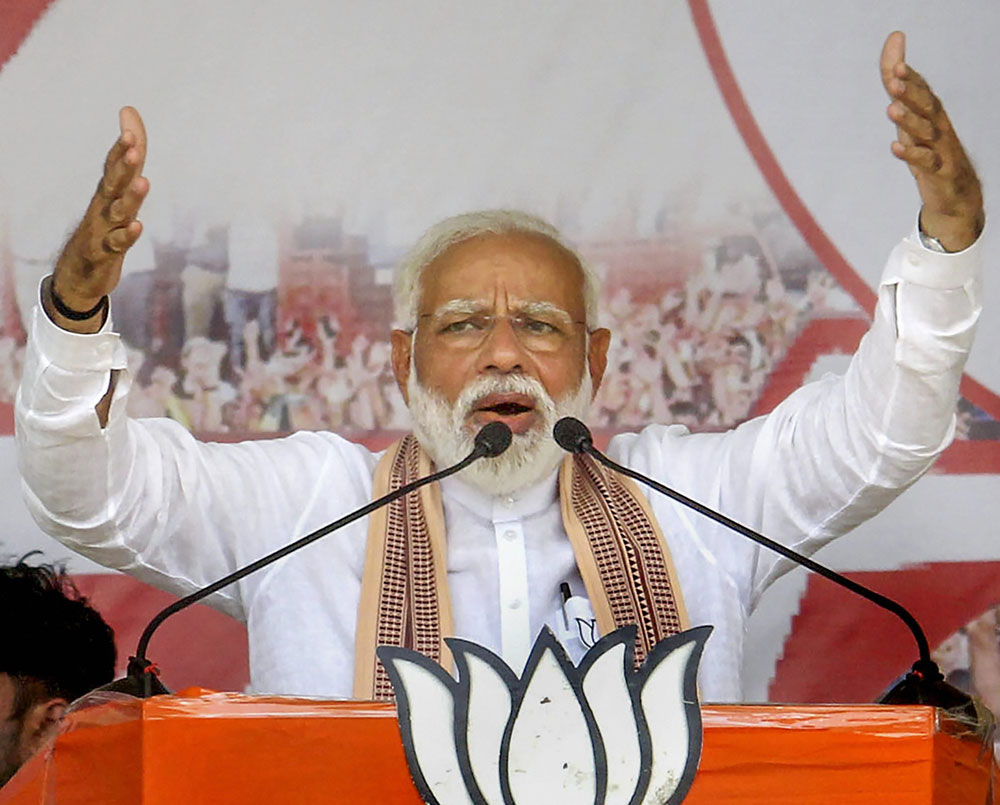 Prime Minister Narendra Modi addressing an election rally during the Lok Sabha elections. The NDA, which he leads, ended up with an overall vote share of around 45 per cent for 353 seats, thus failing to cross the coveted halfway mark as far vote share is concerned
PTI file picture
Madhusudan Bandi   |   Published 07.06.19, 11:09 AM

The National Democratic Alliance registered a massive victory in the general elections, securing more than 50 per cent of the vote share in over dozen states and Union territories. However, the NDA ended up with an overall vote share of around 45 per cent for 353 seats, thus failing to cross the coveted halfway mark as far vote share is concerned. The situation was similar in 2014 when the NDA got a vote share of 38.5 per cent. Its opponents used this fact to argue that the government did not represent the majority in the real sense, conveniently forgetting that the vote shares of the governments formed by the United Progressive Alliance in 2004 and 2009 had been lesser at 36.5 per cent. In fact, no Central government has received more than 50 per cent of the mandate since the first general election in 1951.

Political parties have exploited the first-past-the-post electoral system by inventing formulas to win elections. If a party that has been in power for most of the time worked on a certain combination led by one dominant community, the opposing parties tried to do the same with another combination led by another dominant group. Subsequently, the parties with the highest numbers formed governments. Most often, the remaining segments of the electorate belonging to fragmented groups ended up on the losing side and went unrepresented. This is the reason why elections in India revolve around dominant castes. The FPPS suits the handful of dominant communities, causing unrest among the fragmented Hindu majority, the religious minorities, Dalits and adivasis.

A debate has been simmering for some time concerning the FPPS. The argument revolves around two major points. First, the present system has been failing to provide a ‘popular’ government. This is because governments at the Centre are being formed with less than 50 per cent of the vote share. Second, such alternatives as the proportional representation system or the preferential voting system/ranked choice voting system have the potential to force the political parties to be more inclusive.

The PRS tends to help parties become all powerful. In India, we have witnessed parties ending up as family monopolies in the absence of real democracy. Hence, the best option would be the adoption of PVS, which could lead to the development of a healthy democracy. Under the PVS, a candidate has to receive 50 per cent plus 1 vote to win the election in a constituency.

Under PVS, voters will not only have the luxury of maintaining a connection with their representatives but also have the option of choosing the party of their choice. The contesting candidates, too, would have to toil harder: they would need to win the votes of members of their faith as well as of those from other religions and castes. It stands to reason that a candidate is unlikely to win voters over if he is a bigot, is corrupt or has a criminal background. Contestants would have to be accountable to voters in order to win the required percentage of votes. Further, PVS will provide a sense of relevance to the voters even if the candidate they voted for ends up on the losing side. They can always take consolation from the fact that they participated in a truly democratic process.

The PVS can help political parties from falling prey to unethical demands from segments of the electorate that identify themselves with a certain party. For instance, dominant groups would no longer be in a position to demand reservations in exchange for their support for a political party. Such groups have been successful in destabilizing those governments that have failed to uphold raj dharma. In other words, while holding constitutional power, these governments failed to confront these groups with full authority for the fear of losing their support.

A major focus in the 2019 elections was on the formation of alliances among parties. Alliances play an important role in Indian politics, but why should a voter be at the mercy of egotistic leaders? They decide to enter into alliances with other parties only to acquire power. Ideology is never a priority in this context. In PVS, voters will be in a position to make such a choice by themselves. This way, voters could well determine the course of their political destiny.

Ironically, such an electoral system can only be implemented if those who have benefited from FPPS and entered Parliament decide to amend the Constitution to this effect. Would they do it for the sake of empowering the common man? That is the central question.

The task before voters