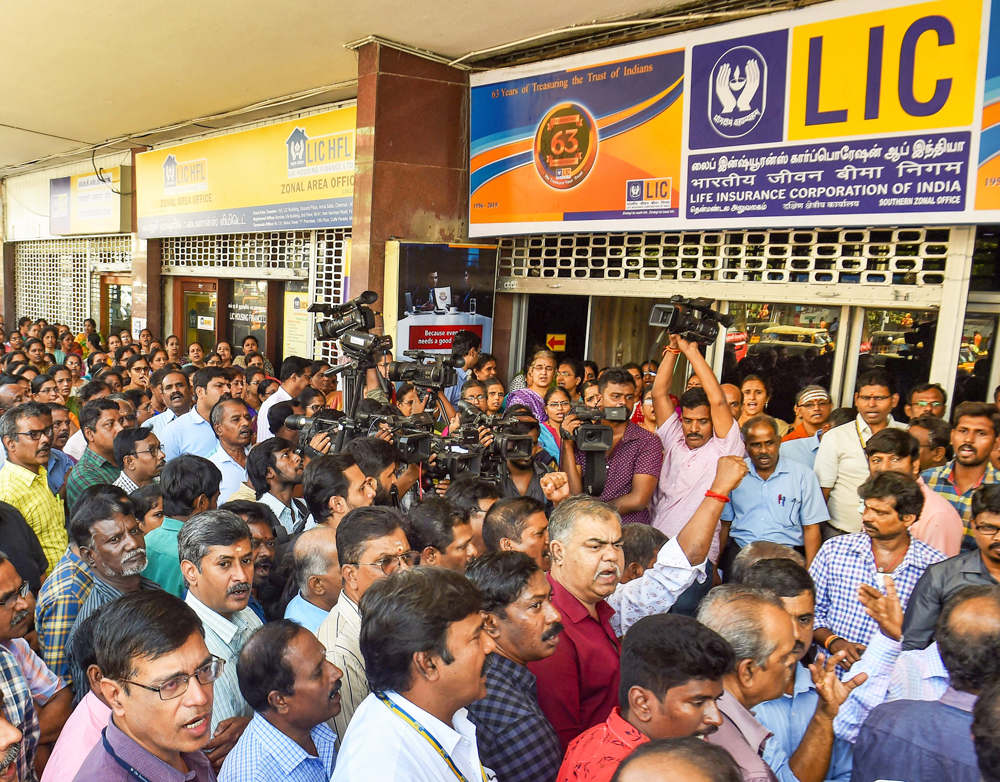 Members of All India Insurance Employees Association stage a demonstration against the govt’s decision to sell the partial stake in LIC through an initial public offer, outside southern regional headquarters of the Life Insurance Corporation of India, in Chennai, Monday, February 3, 2020.
(PTI)
The Editorial Board   |   Published 06.02.20, 06:45 PM

The decision of the Narendra Modi government to divest a small part of its stake in the Life Insurance Corporation of India has sent the stock markets into a tizzy. If and when it happens — probably in the second half of the next fiscal (2020-21) — this is almost certain to become the largest ever capital issue in India. The finance minister, Nirmala Sitharaman, has set an ambitious disinvestment target of Rs 2.1 trillion in her recent budget. Of this, a sum of Rs 90 billion is expected to be raised from the sale of the government’s holding in LIC and IDBI Bank Limited, the loss-making bank in which the insurance behemoth acquired a 51 per cent stake in January last year. A successful flotation of LIC is critical not only for improving the finances of the parlous coffers of the Centre but also for the revival of the near moribund primary capital market. The behemoth dwarfs the private players in the Indian insurance sector: one statistic is enough to show just how big it really is. LIC’s total policy premium collections in the period from April-December 2019 amounted to Rs 1.37 trillion, over 70 per cent of the Rs 1.94 trillion that the entire insurance industry raked in. Market mavens believe the State-owned insurer could be valued at around Rs 8-10 trillion. The government has yet to decide on how much it will offload through the public issue of shares. The figure that is being bandied around is 10 per cent, largely because that is the minimum public float that any listed entity must have under current regulations.

The announcement has already raised an outcry from the 13 trade unions that fear job losses and argue that a sell-off could compromise LIC’s nation-building objectives that are central to its operational mandate. But there are other problems that will need to be addressed. LIC has a very small capital base: a mere Rs 1 billion that will need to be expanded before the public flotation. The government has indicated that the sovereign guarantee granted to LIC will continue, which would soothe any apprehensions that policyholders might have. The government will have to amend the legislation under which LIC was established, turning it into a company that will come under the scrutiny of the market regulator and will have to abide by the provisions of the Companies Act. Until now, LIC has acted under directions from the Centre: it has propped up falling markets; it has shovelled funds into government’s initiatives. If it continues to follow the Centre’s diktats, it will raise serious corporate governance issues that minority shareholders may not be entirely comfortable with.