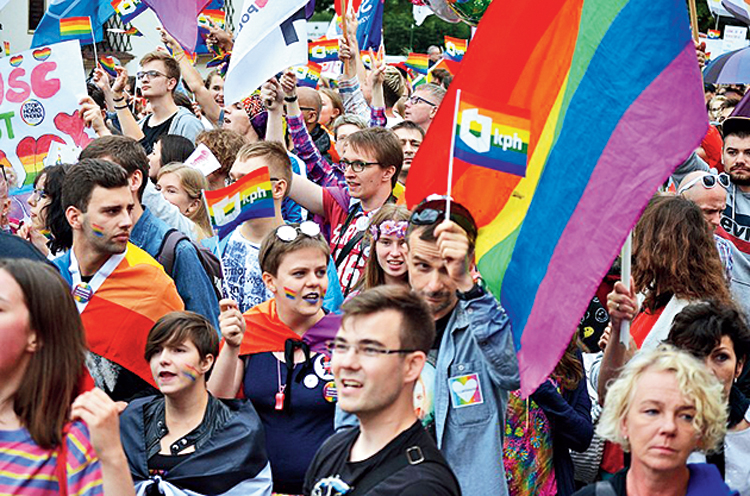 Sir — At least 30 towns and villages in Poland have declared themselves ‘free of LGBT ideology’. Swidnik was the first to declare its homophobic leanings in this staunchly Catholic country. The leader of the right-wing Law and Justice party, Jaroslaw Kaczynski, has condemned gay rights and decided to base his re-election campaign on the ‘ideological war’ against threats to the idealized family.

But is not ‘LGBT ideology’ a bewildering proposition? More than an ideology, sexual orientation is a matter of rights. By failing to distinguish between the two, Polish leaders have revealed their inability to fathom the intricacies of gender and sexual identity.

Sir — Rajesh Kumar Mishra, a member of legislative assembly from Bithari-Chainpur, is reported to have sent his goons after his daughter, Sakshi Mishra, and her husband, Ajitesh Kumar, who is from the Dalit community (“Daughter seeks protection from BJP leader”, July 12). Sakshi had uploaded a video on social media claiming that a purported henchman of her father was chasing her. She filed a legal petition seeking protection. Her father, however, denied all such claims, stressing that his “daughter is an adult and has the right to take her own decisions”. Yet, Ajitesh was reportedly assaulted on the premises of the Allahabad High Court on the day of the hearing.

Given the evils of the deeply-entrenched caste system in India, it is not difficult to see why Rajesh Mishra, a Brahmin, would not be able to accept the marriage. Recently, a Dalit man in Gujarat was killed by his upper caste in-laws in the presence of a women’s helpline team. In spite of legal safeguards, citizens belonging to lower castes continue to be victimized by upper-caste Hindus.

B.R. Ambedkar had emphasized the importance of inter-caste marriage. Thus, the video shared by Sakshi is important. The scheme of the ministry of social justice and empowerment, to provide financial incentives to couples in inter-caste marriages, is a positive step forward. But will such provisions be of much use in the long run?

Sir — It is saddening that Sakshi Mishra had to seek public support to protect herself from her father’s wrath just because she married a man from another caste. Her husband’s safety, too, remains threatened. For many young lower-caste men in India, the simple act of falling in love is lethal.

The Constitution guarantees every adult the right to marry as per their choice. But social stigma and caste hatred come in the way of this freedom. Both caste and religion continue to be major considerations when it comes to marriage, with only about 5 per cent of such unions in India being inter-caste. The couple in question deserves a happy life. It is the State’s responsibility to ensure that they are protected.

Sir — The initiatives by state governments to identify devadasis, hundreds of whom are enslaved in south India, and rehabilitate them is commendable (“Sex slavery in the name of god”, July 12). The ancient practice of initiating young girls into lives as devadasis through a marriage-like ritual with a deity is said to be unsupported by Hindu scriptures. It is shameful that this practice still exists even though it was outlawed countrywide in 1988. It persists because temple heads, political leaders, police personnel and local goons ensure the continued exploitation of poor women for their pleasure. The administration can easily curb this practice if it wants to.

Sir — It is ironic that the Chinese government, which had forced the 14th Dalai Lama to flee to India, is claiming power over choosing his successor (“Warning over meddling on Dalai successor”, July 15). Will the next Dalai Lama continue to run the Tibetan government while in exile in our nation, or be confined to China?