Advertisement
Home / Opinion / Letters to the editor: Violence on minorities in Bangladesh

Letters to the editor: Violence on minorities in Bangladesh 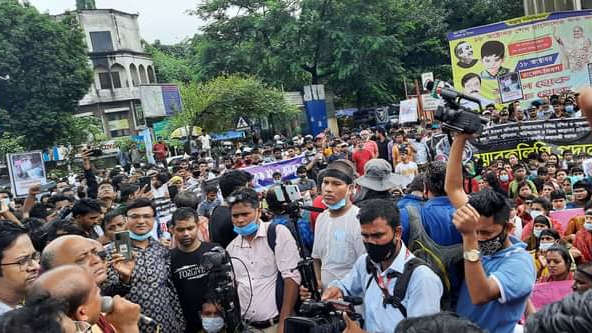 Demonstration at the Shahbag Circle, Dhaka against the communal attack on Bangladeshi Hindus.
Twitter/@SahaKapot
The Telegraph   |   Published 20.10.21, 01:42 AM

Sir — The volatile situation in Bangladesh following the vandalization of temples and Durga Puja pandals — at least six people have been killed in communal violence so far — is unfortunate (“BJP fishes in Bangla waters”, Oct 18). The rising attacks on the minority community in the nation must be condemned unequivocally. But, for an Indian, it is shameful that political leaders in this country are trying to milk such incidents for electoral benefits. The Bharatiya Janata Party leader, Suvendu Adhikari, has even declared that his party will win the Santipur elections by three times the margin by which it won last time on account of the attacks in Bangladesh. Did the BJP need to stoop this low?

Sir — The vandalization of temples and Durga Puja pandals in Bangladesh by unidentified miscreants has raised concerns in India. Bangladesh is a secular country. People have always celebrated festivals like Durga Puja together. It is unfortunate that some are trying to disrupt this tradition. The situation is likely to deteriorate further if there is truth to the alleged call by local extremist outfits to mount such attacks.

Sir — The recent incidents in Bangladesh are disturbing. Some bigoted people have targeted the peace not only in Bangladesh but also in India to fragment society along religious lines. But people who fan communal hatred cannot have a place in any religion. They are just miscreants. Their activities serve only vested interests who would try to win votes from the majority community by fomenting the issue at the time of elections.

Sir — Journalism is often confronted with threats from autocratic regimes. As such, it is significant that Maria Ressa of the Philippines and Dmitry Muratov of Russia have been awarded the Nobel Peace Prize 2021 for their efforts to safeguard freedom of expression, which is the bedrock of democracy (“Truth triumphs”, Oct 13). That this honour has been bestowed upon the fourth estate for the first time since 1935 is a grim reminder of the rising trend of autocratic and divisive forces.

Another problem facing journalism is the excess of information, especially on social media. This has led to a proliferation of unreliable information and the neglect of traditional media which usually go through several checks and balances to report the truth. At such times, the acknowledgement of the courage of journalists is particularly encouraging.

Sir — The Nobel committee’s decision to honour two independent journalists is praiseworthy. This highlights the importance of press freedom and acknowledges the bravery of journalists who speak up against the ruling regimes of their respective countries.

In the 120-year history of the prize, this is only the third time that journalists have been honoured. Journalists across the world must take pride in this. There could not have been a better time to honour the work of the fraternity of journalists. This will boost the morale of those working under the most difficult circumstances.

Sir — This year’s Nobel Peace prize is meant to send an unequivocal message to people around the world about the way to keep democracy alive — by ensuring the freedom of the press.

Sir — October used to be the month which ushered in winter. The fog or the nip in the air made one feel that winter is not far away. The October I knew and cherished as a child feels like a stranger this year. With temperatures soaring above 37 degrees Celsius in this part of the country, something seems lost from what used to be my favourite month. We cannot be oblivious to the changes that global warming is bringing not only to the climate but also in our lives. Perhaps it is not too late to revive October’s former charm. Swift action must be taken to check climate change.

Sir — How often has the tattooed name of a former partner aggravated the pain of heartbreak or a youthful decision to get inked been an impediment to a corporate promotion? A company based in New York is now gaining attention for freeing the act of getting a tattoo from the scope of retrospective regret — it has engineered a body ink that disappears in 15 months or less. This, many would argue, defeats the purpose of this style of body art — a tattoo usually reflects a lifelong commitment to an idea. But perhaps this captures the temperament of a generation that is ever ready to ‘move on’?