Advertisement
Home / Opinion / Letters to the Editor: Teachers must engage with pupils to curb disruptive tendencies

Letters to the Editor: Teachers must engage with pupils to curb disruptive tendencies 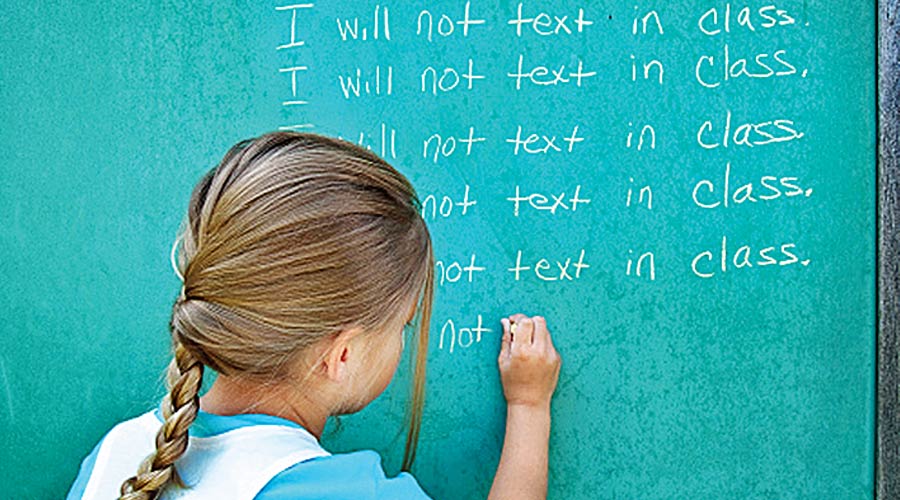 Sir — Most of us have been forced by teachers to write lines as punishment for being unruly in class. Recent excavations indicate that naughty pupils in ancient Egypt were not spared the wrath of their teachers either. Archaeologists have found  hundreds of fragments of pottery, which have a single symbol repeated on both sides. But teachers fail to understand — a folly that has persisted for over two millennia — that the drudgery of repeatedly writing a line does not rectify one’s behaviour. Teachers must constructively engage with pupils to amend any disruptive tendencies. The ancient Egyptians may not have known the virtues of collaborative teaching but modern educators certainly cannot claim the same.

Sir — A special court in Gujarat has awarded the death penalty to 38 people and sentenced 11 others to life imprisonment for the serial bomb blasts in Ahmedabad in 2008 that killed 56 people and injured over 200 (“38 on death row for Gujarat blasts”, Feb 19). The verdict came almost 14 years after the blasts — the police claimed that the Indian Mujahideen, a banned terror outfit, planned the attacks to avenge the 2002 Gujarat riots.

This is the highest number of death penalties that have been given in India in a single ruling. The convicts are likely to appeal against the verdict in the Gujarat High Court. It remains to be seen if the higher court upholds the decision.

Sir — Justice has been served to the families who lost their loved ones in the Ahmedabad bombings in 2008. The court has given the death penalty to a staggering 38 convicts. This is bound to reignite the debate on capital punishment.

Sir — The prime minister, Narendra Modi, recently connected the 2008 Ahmedabad blasts with the electoral symbol of the Samajwadi Party — a cycle — by stating that the terrorists had planted the bombs on bicycles in Gujarat (“Same mischief”, Feb 22). Modi took this unfair dig at the Bharatiya Janata Party’s principle rival in Uttar Pradesh while canvassing for the assembly polls in Hardoi. But Modi should remember that his stints in power have been marred by multiple violent events.

Sir — It is shameful that the BJP’s Gujarat unit uploaded a cartoon on social media depicting a group of people — the skull caps and beards left no room for doubt about their identity — hanging by a noose right after a special court awarded the death penalty to several people convicted for orchestrating the 2008 Ahmedabad blasts. There is a long history of fascist regimes using derogatory cartoons to vilify certain communities — Nazi Germany used dehumanizing caricatures of Jews. We must not overlook such transgressions.

Sir — The crisis in Ukraine has taken a new turn with Russia recognizing the two Kremlin-backed regions, Donetsk and Luhansk, as independent republics and sending ‘peacekeeping forces’ to eastern Ukraine (“It’s war”, Feb 23). World leaders were quick to condemn Russia’s actions, with the United States of America imposing fresh sanctions on the former. The NATO chief, Jens Stoltenberg, has accused Moscow of undermining efforts at resolving the conflict. But it seems that the Russian president, Vladimir Putin, is set on his decision. India must take an informed position on the crisis.

Sir — India has voiced deep concern over the escalation of tension along the Russia-Ukraine border. But New Delhi’s measured response indicates that it is worried about balancing its ties with both Russia and the US.

Sir — The celebrated linguist and philosopher, Noam Chomsky, was right to say that Islamophobia is taking its most lethal form in India under the aegis of the Narendra Modi government (“Most lethal form here: Chomsky”, Feb 11). Religious and cultural pluralism — an inextricable part of India’s ethos — have been torn apart by the forces of Hindutva. It is imperative that the citizens of this country resist all attempts at communalization.

Sir — It was great to learn that Rohit Sharma has been appointed as the Test captain of the Indian men’s cricket team for the upcoming series against Sri Lanka (“‘No. 1 cricketer’ to steer India future”, Feb 20). However, the selectors’ decision to drop Ajinkya Rahane and Cheteshwar Pujara from the squad may not be wise; Rahane recently scored a century in his first match for this year’s Ranji Trophy. The Indian team would have benefited from the skill and experience of these two players.

Sir — Rohit Sharma’s selection as the Test captain for the upcoming series against Sri Lanka indicates that the Indian team is undergoing major changes. Hopefully, Sharma will successfully lead the team to victory.

Sir — In a landmark judgement, the top court in Colombia has ruled that having an abortion is no longer illegal (“Abortion no longer a crime in Colombia”, Feb 23). This is an immense leap forward in the fight for women’s rights.