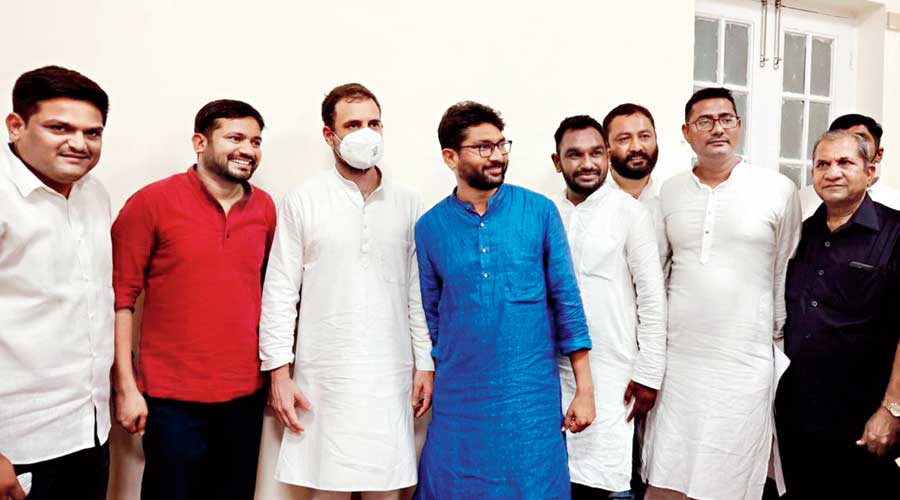 Congress leader Rahul Gandhi with Kanhaiya Kumar, MLA Jignesh Mewani and others at AICC HQ in New Delhi.
PTI
The Telegraph   |   Published 01.10.21, 01:16 AM

Sir — Ending months of speculation, the former Communist Party of India member and Jawaharlal Nehru University Students’ Union president, Kanhaiya Kumar, has finally joined the Congress. The independent lawmaker from Gujarat, Jignesh Mevani, did not formally join the party, but assured that he would contest the Gujarat polls on a Congress ticket.

Kumar’s move is interesting in the light of the comments of the Trinamul Congress supremo and Bengal chief minister, Mamata Banerjee, during the virtual meeting of Opposition parties in July — she had said that one must forget who the leader is as the people of India will lead the fight against the Bharatiya Janata Party. Unfortunately, the TMC itself is still at odds with the Congress, mounting offensives against the party ahead of the Bhowanipore bypolls through speeches and articles.

More people are expected to throw in their lot with the Congress once the leadership issue is resolved. Kumar and Mevani are set to urge the youth to join the Congress in numbers. This would be a welcome change.

Sir — Kanhaiya Kumar has joined the Congress at the right time. Having lost the 2019 parliamentary elections, he is aware that there is no substitute for mainstream politics in India. The Congress has been deserted by many on account of differences in opinion. It remains to be seen what role the former student leader plays in the revitalization of the Congress. At present, the lack of a democratic atmosphere within the party is obvious. One expects Kumar to put the house in order.

Sir — It is good to see young leaders like Kanhaiya Kumar and Jignesh Mevani extending support to the Congress. One expects their induction — Mevani is yet to join formally — into the Grand Old Party to help in its much-needed revival.

The inept handling of the party in the last few years has caused immense harm and resulted in the exit of some promising leaders. One hopes the party will utilize the potential of these two young men to fill up the void created by the deserters. One also wishes that the party rises again, keeping in mind the path shown by M.K. Gandhi, Jawaharlal Nehru, Vallabhbhai Patel and others.

Many Indian states have spent massive sums of money to establish medical colleges and maintain their infrastructure, but have limited choice in admitting students from their states.

There is also a need to reassess the role of competitive exams. Students often feel disillusioned or are tragically driven to suicide when they fail to meet the standards of such exams; this is unfair to them. Further, if the NEET were indeed all about merit as is claimed, how is it that the Union government has approved reservations for some sections?

Sir — Any true test of merit requires fair competition and this can stem only from equity, not mere equality. Grouping students from diverse backgrounds together is a bad idea.

Sir — It is heartening that the forest ministry has written to principal wildlife conservators in 17 states discouraging the use of harsh Hindi words — “aatanki” (terrorist) and “utpati” (oppressor), for instance — while narrating elephant attacks. Such descriptions can indeed inculcate a negative impression of wildlife among people — in India, it is not uncommon for people to kill wild animals out of fear. Conservators as well as the media should keep in mind the impact their words can have. They should try and cultivate a sense of harmony between wildlife and mankind in order to restore and retain the balance of nature.