Readers' Speak: populist leaders — even in India — try to use religion to please the electorate 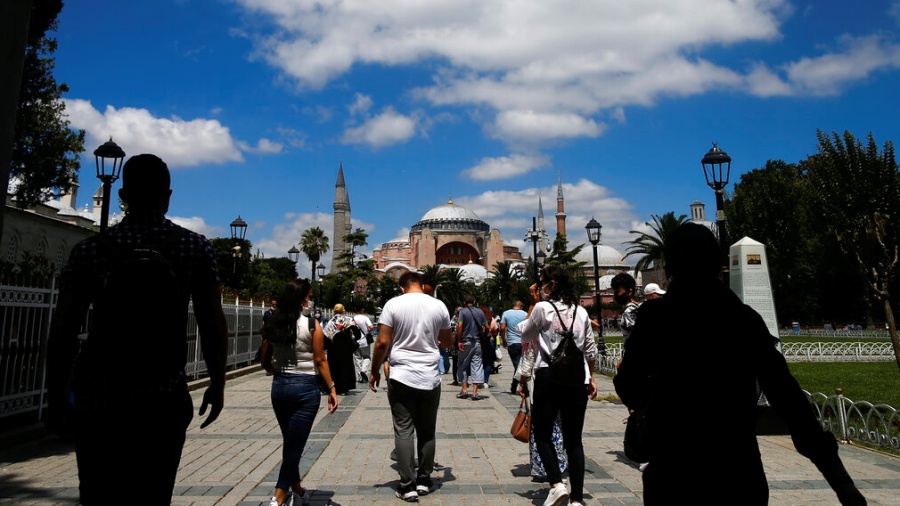 Sir — The decision of Recep Tayyip Erdogan to change the Hagia Sophia, a Unesco world heritage site, back to a mosque takes Turkey’s stature as a secular country back by centuries. The edifice was built as a Christian cathedral in the sixth century, but following the rise of the Ottoman empire, it was converted into a mosque. Only 85 years ago, the Hagia Sophia was freed from religious ties and turned into a museum. Populist leaders — even in India — try to use religion to please the electorate. It is up to the citizens of the country in question to decide whether they want to live in a communal past or move towards a secular future.

Sir — The dramatic death of the dreaded gangster, Vikas Dubey, in an alleged police encounter ended a saga of violence before he could make any disclosures about possible links he shared with leaders across the political spectrum (“Free run”, July 13). The police’s version of the incident is that Dubey snatched a pistol from the Special Task Force and tried to flee after the police vehicle was overturned on the way to Uttar Pradesh. The fact that he was shot dead in the encounter that ensued is beyond belief: the killing appears rather premeditated.

Some speculate that angry policemen may have exacted their revenge for the killing of eight of their colleagues by Dubey and his gang. But it cannot be ignored that the carnage in Kanpur was allegedly the result of a tip-off by a policeman. Those who are of the view that Dubey met his end in the manner he deserved should remember that an extra-judicial killing for any reason is absolutely unacceptable in a country governed by the rule of law. Even popular approval or applause cannot make it right. It portends the dangerous scenario of the police wielding their power with impunity to deliver what they consider ‘justice’.

Convicts must be punished in accordance with the law after following due legal process in courts under constitutional provisions. The police force is not tasked with intervening in this process and meting out summary or retributive justice. In Uttar Pradesh, the police are already infamous for staged encounter killings. The nexus among criminals, politicians and the police is the bane of our country. Criminals often operate on the strength of patronage from politicians. It is a reciprocal arrangement whereby they aid each other and thrive. It is time radical changes are brought about to free politics and society from criminals and crime.

Sir — When the extra-judicial killing of a gangster is projected as an act of courage, it becomes clear that the problem remains far from being resolved. The sudden elimination of Vikas Dubey raises more questions than it answers. Shooting a suspect after an arrest has become the new model of justice, especially when the accused is yet to register his statement. This leads to suspicion whether the State authorities were in a hurry to silence Dubey — could he have some precious information to divulge that would put people in positions of power at risk of being exposed?

It cannot be denied that there is a serious lapse of security under the governance of the chief minister of Uttar Pradesh, Yogi Adityanath. It is unlikely that a notorious gangster like Dubey was being transferred without adequate security. We cannot be living in a democracy if a tenet as basic as justice is not to prevail.

Sir — The alleged encounter killing of Vikas Dubey has not even come as a surprise to most people. This turn of events seems expected.

An accused in around 60 criminal cases, Dubey deserved the strictest punishment under the law. But the penchant of the UP police for ‘instant justice’ is not acceptable as an alternative. This violation of the legal system is dangerous for society. The need of the hour is to plug the loopholes in the criminal justice system. This includes steps such as the fast-tracking cases right from the start and breaking the nexus among criminals, politicians and the police.

Sir — Following what is suspected to be a fake encounter killing, the policeman accused of having tipped off Vikas Dubey about the Kanpur operation has moved the Supreme Court for protection. Has people’s faith in the law of the land been entirely eroded? This is highly unfortunate.