Advertisement
Home / Opinion / Letters to the Editor: Children should be taught to embrace differences

Letters to the Editor: Children should be taught to embrace differences

Readers write in from Calcutta, Chennai, New Delhi and Visakhapatnam 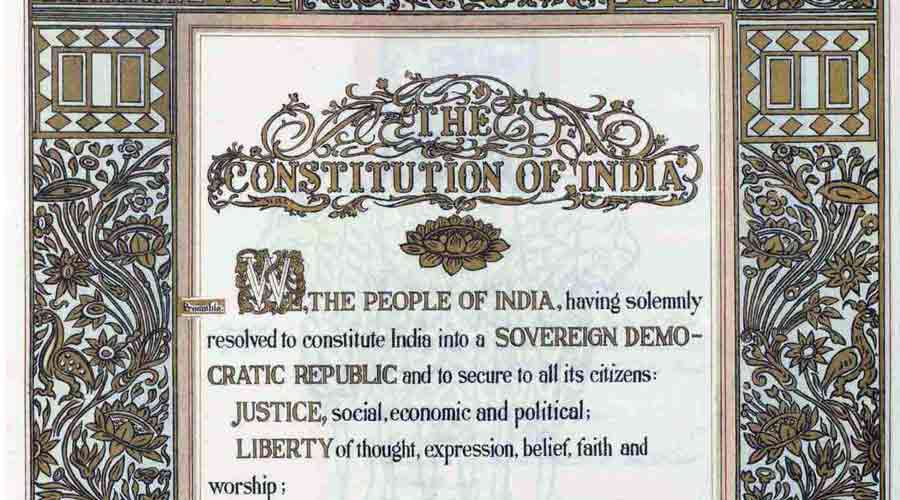 Preamble to the Constitution of India
Wikimedia Commons
Published 25.01.22, 01:11 AM

Sir — Students in the pre-primary and primary sections of the Mahadevi Birla World Academy are being taught about the Preamble to the Constitution. The school aims to impart lessons in justice, liberty, equality and fraternity to young learners. At a time when students are being tricked into participating in hate speech, it is good to see educational institutions taking steps to ensure that children are familiar with the ideals enshrined in our Constitution. One way of safeguarding the future of Indian democracy is to inculcate the fundamental tenets of good citizenship as early as possible. Children should be taught to respect and accept others irrespective of differences.

Sir — The observation made by the prime minister and the home minister that the contributions of thousands of Indians who were part of India’s freedom struggle have been overlooked is not wrong. But Subhas Chandra Bose is not one of them. The Bharatiya Janata Party’s attempts to usurp freedom fighters into its fold must be resisted. The divisive antecedents of the party cannot be eclipsed by any number of statues.

Sir — The Centre’s decision to instal a statue of Subhas Chandra Bose at India Gate to commemorate his 125th birth anniversary should be lauded. It is irrelevant whether or not the decision had ulterior political motives because these will soon be forgotten while the statue will live on. The Centre should now unravel the mystery shrouding Bose’s death.

Sir — Gopalkrishna Gandhi has brilliantly captured the essence of India envisioned by Netaji Subhas Chandra Bose (“In solidarity”, Jan 23). He rightly highlighted that Bose had warned that religion can be exploited by evil forces to create discord and disunity among people. Even while the prime minister worshipped his holographic statue, Bose’s vision has been erased in New India.

Sir — There is some conjecture that the installation of Subhas Chandra Bose’s statue is an attempt to cover up the Centre’s rejection of West Bengal’s Republic Day tableau. If the Centre had prior plans for the statue, why did a hologram need to be used? Surely, it would not have taken the Centre long to construct a granite statue? We should assess this grand gesture critically.

Sir — The Bharatiya Janata Party’s goal has always been to establish a Hindu rashtra. Asim Ali explains this exhaustively in his article, “Troubled template”(Jan 22). The acceptance that the Hindutva has found among the masses is the reason that the oratory of the Narendra Modi-Amit Shah-Yogi Adityanath trio is met with resounding approval. It may thus not be easy to dislodge the BJP in spite of the rise in joblessness, price of essential commodities and so on.

Sir — Gregory Stanton, president of Genocide Watch, has warned that early signs of such a massacre are visible in India (“Genocide early warning”, Jan 20). He must not be ignored. The ongoing persecution of Muslims and other minorities is undoubtedly a result of the policies pursued by the Narendra Modi-led government. The Hindutva ideology has now become a threat to the security of the nation.

Sir — The prediction that India is headed towards a genocide brings back horrific memories of the Partition, the Sikh massacre in the late 1900s, the butchering of Muslims in Gujarat, the Delhi riots and so on. The recent rise in vandalism of churches and mosques, the arrest and torture of Bengali Muslims in Assam and the plight of Kashmiri Muslims seem to suggest that democracy is dying in India. The only hope now is a new government after the 2024 elections.

Sir — Politics is more than a profession. But with assembly election around the corner, politicians are behaving like corporate executives, always looking to better their prospects. A number of politicians have jumped ship from the Bharatiya Janata Party to the Samajwadi Party in Uttar Pradesh. Conversely, Aparna Bisht Yadav, the sister-in-law of the Samajwadi Party chief, Akhilesh Yadav, has shifted to the BJP. The crux of the issue seems to be gaining a ticket to fight elections. But, at present, neither party can be said to have the upper hand.

Sir — There has been a consistent demand for higher taxes on tobacco. Since tobacco products generate a lot of revenue, increasing its excise duty would help the economy, which has been battered by the pandemic. Additionally, this would also curb tobacco usage and, in turn, bring down comorbidities that can prove to be fatal for Covid-19 patients. The increased revenue could be used to fund vaccination drives and to bolster India’s rickety healthcare system.

Sir — As a gur lover, I enjoyed reading the article, “Too Gur To Be True?” (Jan 23), by Paromita Sen. Bengalis wait eagerly for winter so that they can indulge in delicacies made of nolen gur.