Readers write in from Faridabad, Ujjain, Calcutta, Maruthancode, and Guwahati 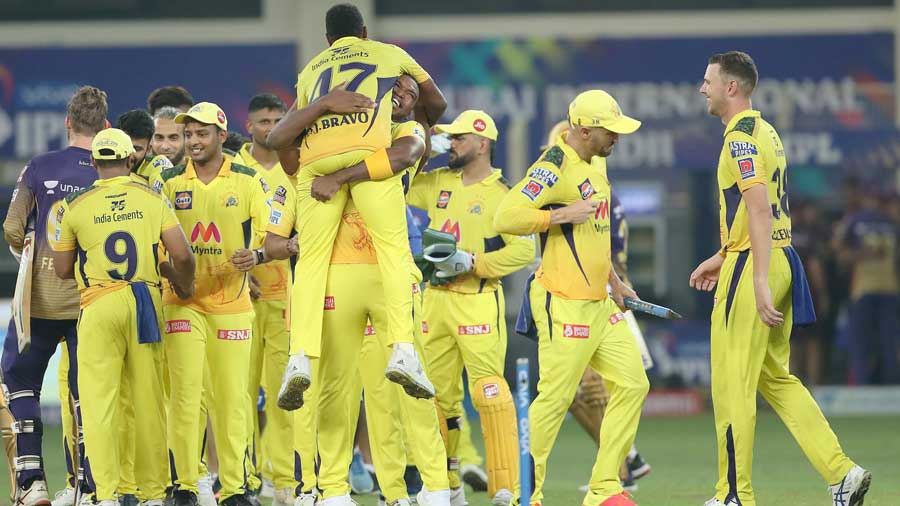 Chennai Super Kings celebrate their win in the final of the Indian Premier League 2021 between the Chennai Super Kings and the Kolkata Knight Riders, at the Dubai International Stadium, UAE, Friday, Oct. 15, 2021.
PTI
The Telegraph   |   Published 19.10.21, 01:04 AM

Sir — The clash between the Chennai Super Kings and the Kolkata Knight Riders in this year’s Indian Premier League final made for a delightful game of cricket (“Dhoni’s Kings are kings again as Knights lose fizz in final chase”, Oct 16). The CSK victory comes after its lacklustre performance last year when it fell to the bottom of the table.

The Knights must examine why they lost the match. There was a dramatic batting collapse which went from 91 for no loss in the 11th over to 125 for 8 in the 17th over. This is unacceptable. Hopefully, the KKR will be consistent in its performance next year.

Sir — M.S. Dhoni has proved that he is still one of the best cricket captains by leading the CSK to victory in IPL 2021. It is incredible how the team bounced back after a disappointing season last year. The CSK, considered to be the oldest squad overall in terms of average age, performed well throughout the tournament under Dhoni’s leadership. His appointment as a mentor for the men’s national cricket team is indicative of the Board of Control for Cricket in India’s faith in him.

Sir — The CSK must be congratulated for clinching this year’s IPL. This is the team’s fourth victory after 2010, 2011 and 2018. The team, under the captaincy of M.S. Dhoni, performed consistently throughout the tournament. It was a well-deserved win.

Sir — The claim of the defence minister, Rajnath Singh, that the saffron icon, V.D. Savarkar, submitted mercy petitions to the British at the behest of Mahatma Gandhi is factually incorrect. Savarkar filed his first mercy petition in 1911 and another in 1913 while Gandhi was still in South Africa. It was not until 1920 that Gandhi advised Savarkar’s younger brother, Narayan Damodar Savarkar, to file a petition on the ground that the former’s offence was purely political. This event is now being twisted by the sangh parivar for its benefit.

The bone of contention is not the petitions themselves but Savarkar’s pledge of allegiance to the British in return for his release from prison. By celebrating Savarkar, the Bharatiya Janata Party does an immense disservice to the countless Indians who laid down their lives during the struggle for freedom.

Sir — It cannot be denied that V.D. Savarkar has left behind a questionable legacy. It is unfortunate that the sangh parivar is twisting facts to suit its narrative.

Sir — Even if one were to acknowledge V.D. Savarkar — BJP’s only claim to the freedom struggle — as a freedom fighter, his ideology is corrosive.

Sir — At a certain age, most men and a few women begin to look at themselves in the mirror the way the world looked at Afghanistan after the Taliban took over — with mounting anxiety about what is going to happen next. Scrutiny soon confirms their worst fears — they are going bald. Yet, the world responds differently to balding men and women. One of the reasons that hair thinning and loss in women remains taboo is that it is not talked about. If women admitted to it more often and more openly, this could change.