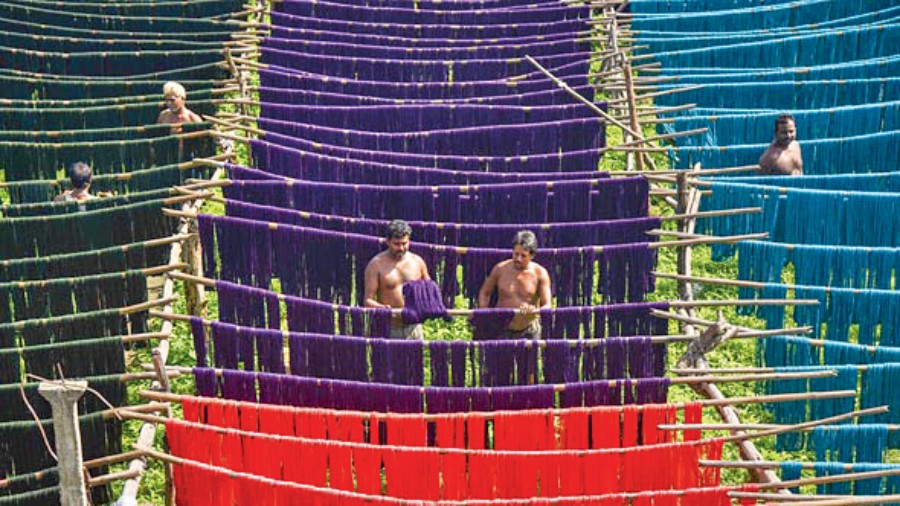 Sir — On National Handloom Day, the Union minister of textiles, Smriti Irani, asked people to promote the cause of India’s rich and diverse handloom sector and acknowledge contribution of weavers in conserving our heritage. Bollywood stars obliged by posting pictures of themselves in fancy sarees. But what about those who made those sarees? People buying more handloom does not necessarily translate into profits for those on the ground who put in hard work to create these beautiful fabrics. They are often cheated out of money by middle-men who buy cheap and make huge profits.

Sir — It would not be completely off the mark to say that the victims of the Air India Express flight crash lost their lives to a man-made disaster. The flight was on a Vande Bharat mission and was returning from Dubai to Kozhikode, Kerala. It skidded off a rain-soaked runway to claim the lives of 20 people, and injured around 150 passengers. The runway at this airport — known as a table-top runway by pilots — led to a 40-feet deep valley, where the plane fell and split into two. Interestingly, this airport receives a lot of international flights; every year not only do a large number of flights to Saudi Arabia for the hajj pilgrimage leave from here but it also supports a considerable number of international flights particularly to Gulf countries. Thankfully there was no fire, otherwise the loss of life would have been far worse. In 2010, in a similar tragic accident at another hill top airport in Mangalore, an Air India Express flight from Dubai carrying 166 people had skidded off the runway, tumbled into a valley and burst into flames, killing 158 people.

What one fails to understand is that why did air traffic control not direct the flight to a safer airport even after the India Meteorological Department had declared a red alert in three of Kerala’s districts, including the said airspace. One hopes there is an honest investigation into this incident and systemic changes are put in place to prevent them in the future. Any solution will require both money and manpower. The Central government should come forward to help the state make the said airport safer.

Sir — The flight accident at Kozhikode is unfortunate. It is not clear why warnings about the lack of safety of the airstrip were ignored even after a similar accident took place in Mangalore in 2010. The least that could have been done was to reschedule the flight given the heavy rains. The flight could also have been diverted by ATC once the pilot found landing difficult owing to waterlogging and poor visibility. One hopes that just because the State carrier is involved, enquiries will not put the blame on rain but actually get to the bottom of the matter so that such a tragedy does not recur. The government has announced monetary compensation for victims, but this will not bring back those who lost their lives.

Sir — The gruesome incident at the Kozhikode airport has left citizens shaken. The Kozhikode airport has a table-top runway, just like the one at Mangalore which had witnessed a more horrific crash in 2010 that killed about 160 people. This incident is a reminder to the authorities that they should turn their focus on the safety audit of such table-top airports, which can be unsafe during the rainy season. Either table-top airports should be shut down during the monsoons, especially in the southern states that experience torrential rainfall or they should consider building extra facilities that will make such runways safer.

The pilot and the co-pilot who lost their lives in the line of duty showed exemplary courage and true grit under a trying situation. Their presence of mind helped save over 100 lives. Mention must also be made of the cooperation of local people who immediately swung into action and participated in rescue operations along with the authorities. Their bravery saved lives and deserves applause. Our hearts go out to the family members of those who lost their lives.